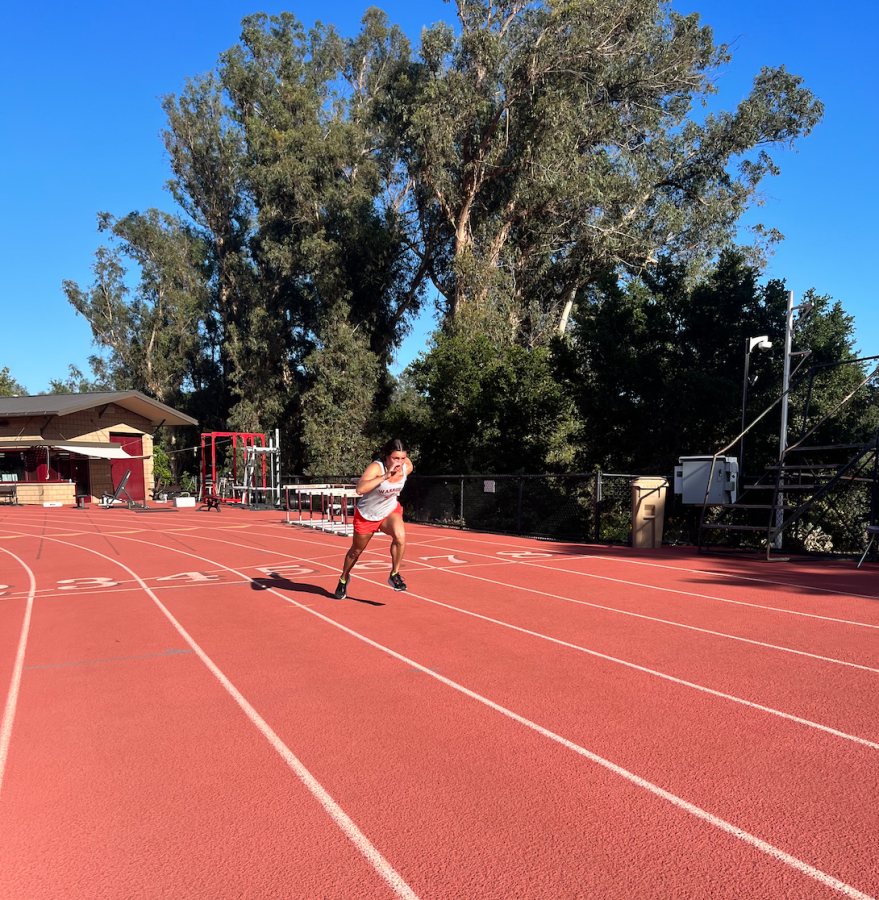 Second-year Abby Rumohr practicing to get ready for the track and field team's upcoming meet!

With the end of the semester fast approaching, Westmont students and athletes are buckling down to finish the school year and athletic season well.

For Westmont’s men’s and women’s track and field teams, assistant coach Lindsey Connolly — Coach C, to many of her athletes — expressed her thoughts going into the next several weeks: “It’s that time in the season where everyone is hanging on with hard training, school getting close to being over, and just being tired, in general.” “I think there will be good performances at GSAC (Golden State Athletic Conference),” Coach C continued, “but everyone is just doing what they can to get there healthy.”

The Warriors transitioned to their outdoor season during spring break at the Fred Hardy Invitational in Richmond, Virginia: home of legendary cross country and track and field head coach Russell Smelley.

“It was definitely an interesting transition going from indoor to outdoor season,” expressed second-year and recent indoor All-American Anneline Breytenbach. With each person running different events now in outdoor season, she shared that “training together [is] even more special, since we only get to spend so much time together.”

Once the Warriors returned from Virginia, runners, throwers and jumpers hopped right back into the school-sport grind and have had a meet almost every weekend since.

Coming back from sickness, first-year sprinter Jaiden Rodrigues competed to the best of her ability in the annual Westmont Classic back in March. Impressively, she placed third in the 200 meter race with a time of 26.34, less than a second behind the first place finisher from George Fox University. With few female sprinters on the team, Rodrigues tried to not let that pressure negatively impact her, and she stayed motivated by taking small steps of improvement and through the support and encouragement from her team.

Breytenbach, herself, ran a season-best and personal-best time in the 1500 meter race, finishing first with 4:41.5, with first-year teammate Abigail Hundley right behind her at 4:43.17. Making the B-standard qualifying time of 4:43.5, the two celebrated with several other teammates who also qualified for outdoor nationals.

Breytenbach looked to her teammates who also had stellar performances that day, despite the blistering heat. First-year Kari Anema ran “a killer 5k” — finishing in second place with an A-standard qualifying time of 17:29.63, and Breytenback commented “her kick was incredible!” First-year, Landon Torres “raced all over the place” With a time of 4:55.82, Torres “won her heat in the 1500 by a landslide,” Breytenbach exclaimed, and did well in the 5000 meters and in the 4×4 as the anchor to secure first place for her team.

This past weekend at the big Pomona-Pitzer meet in Claremont, Rodrigues placed lower because there was more competition, but it actually helped her post a faster time of 25.93 seconds. She also ran the 400 meter dash with teammate Abbie Monk. The two placed sixth and 15th, respectively, with times of 59.33 and 61.79 seconds. Breytenbach placed eighth in the 800 with a time of 2:17.39 alongside first-year teammates Elise Short, Emily Wheeler, Ana Wanner and Anna Nicholas. Torres finished seventh in the 5000 meter run with a time of 18:46.60.

Breytenbach concluded, “I’m super excited for some more races, GSAC, Nationals in May and continuing to watch my teammates grow and push themselves!”Next, the Warriors will compete in the GSAC championships hosted by Westmont at Thorrington Field. Come support the Westmont Warriors on April 28 starting at 11:00 a.m. and April 29 starting at 10:30 a.m.