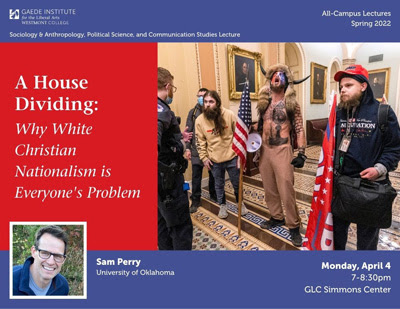 Courtesy of the Gaede Institute

On April 4, Dr. Samuel L. Perry — a sociologist from the University of Oklahoma — spoke to faculty, staff and students at a lecture titled “A House Dividing: Why White Christian Nationalism is Everyone’s Problem.” A seminary-educated professor, Dr. Perry lectured on the presence of Christian nationalist ideology in the United States, sharing results from his research and criticizing the idealogy’s pervasive and dangerous nature of being authoritarian, anti-democratic and conspiratorial.

The audience, spilling out of the Global Leadership Center (GLC) Simmons room, was captivated by his message. Many listeners walked away with many insightful questions in response to the information Dr. Perry offered.

In his interview with the Horizon, Dr. Perry shared that he grew up in a Christian home with parents involved in various church ministries, and that he was fully captivated to follow Christ personally when he began college.

To begin his lecture, Dr. Perry acknowledged his own Christian faith. He then defined Christian nationalism as “an ideology that idealizes and advocates a fusion of American civic life with a particular kind of Christianity.” He stated that this particular branch of Christianity is one that is defined by attitudes and beliefs that “do not center on orthodoxy or a life of imitating Christ.” Dr. Perry also described this concept as an “ethno-culture” centered around the power white people have legally held throughout the history of the United States.

To demonstrate how researchers have measured Christian nationalism, Dr. Perry shared with his audience seven statements about the church and state that researchers had asked a large sample to rate their level of agreement. Statements included sentiments such as “The success of the United States is part of God’s plan.”

Dr. Perry elaborated that individuals of white and Christian identities naturally tend to have feelings ranging anywhere from disinterest to hatred for people who are not Christian and white. Furthermore, Dr. Perry deemed some of the beliefs — such as barring criminals from voting or thinking of racial injustice as a low priority — as un-Christlike and lacking in self-sacrifice.

Dr. Perry emphasized that many Christians oftentimes hold beliefs that fall on the scale of Christian nationalism. Perhaps the greatest danger of this ideology, Dr. Perry argued, is that it threatens our Christian witness in the world and causes some to be militant against those who are neither white nor Christian.

In the interview with the Horizon, Dr. Perry elaborated on the effects of Christian nationalism, stating that Christianity is often viewed by the secular world as a community who rallies against certain minority groups. Listing some groups associated with an intolerant Christianity, Dr. Perry named anti-Muslim, anti-Socialist, anti-Buddhist and anti-Liberal Christian associations. Ultimately, he declared that, for Christians, “When your relationship to non-Christians becomes ‘us versus them,’ then I would say you’ve bought into Christian nationalism.”

Both in his interview and during his lecture, Dr. Perry made an important clarification: “When I talk about Christian nationalism, I don’t mean orthodoxy, I don’t mean somebody who’s made Jesus the Lord and Savior of their life, I don’t mean somebody who wants to live out God’s mandate to serve and love people; what I’m really referring to is an ethnocultural order: when Christianity becomes a code word for ‘people like us.’” Unfortunately, some might not even deliberately adopt the ideology of Christian nationalism, accepting it unintentionally. He said that calling someone by the label “Christian nationalist” and declaring that their ideology defines them is unhelpful and unloving.

Second-year sociology major Ella Sollie attended the event and enjoyed the structure of Dr. Perry’s presentation. According to Sollie, “It wasn’t a professor talking from a high place, but rather engaging in a conversation with all of us.” Like Dr. Perry, Sollie agreed that the views revealed by many of the diagnostic questions for measuring Christian nationalism were not ones she associated with Christ-likeness.

As a white Christian in the current political climate, Sollie says race is something she thinks about frequently. Sollie reflected, “so many people like to dance around the fact that race and racism is so prevalent in our society, and knowing that those are connected to things happening in our country, and him explicitly naming that, was a relief.”

Dr. Perry’s comments about loving the people who believe in the ideology convicted Sollie. She found in Dr. Perry’s talk an important reminder to love and share in growth with others despite their beliefs — a challenge for Christians around the world. According to Dr. Perry, whether enacting our core political beliefs or loving those who are unloving, Christians must be united in the pursuit of self-sacrifice. Dr. Perry offered this bold statement in his interview, claiming: “Christian nationalism is anti-Christian because it hates the cross … where is the sacrifice for other people?”