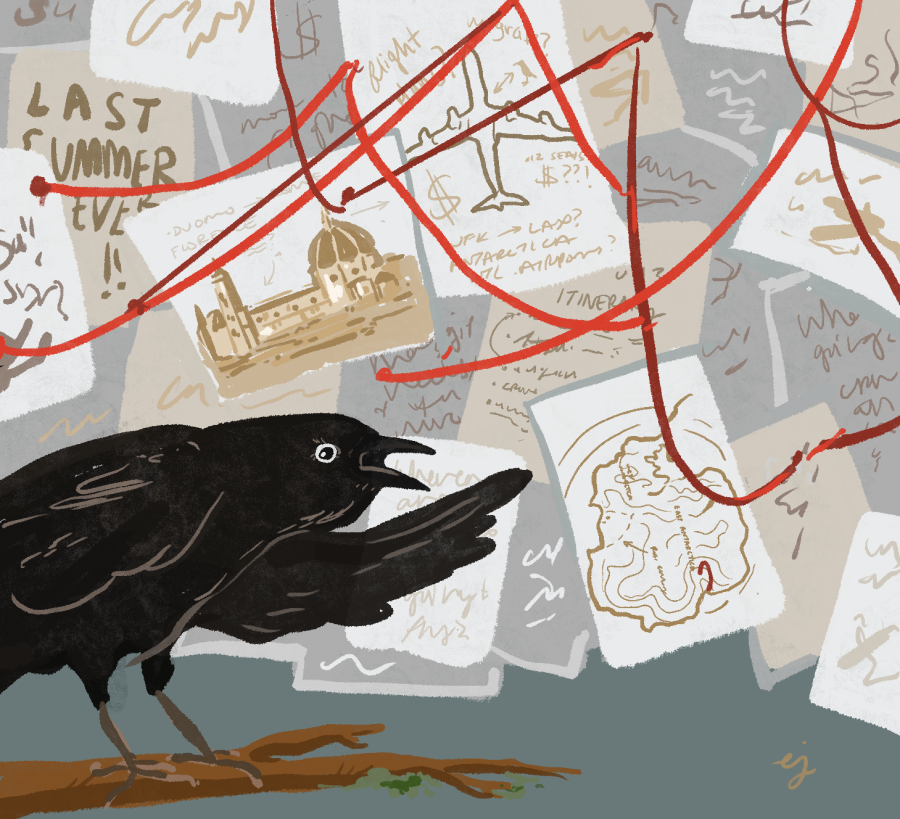 "So if I've done my triangle math correctly from the Dr. Howell lecture I eavesdropped, I propose we meet up at my third cousin's place: the penguins in Antarctica."

It’s that time of year again, when students flock together in their last moments before leaving campus for summer or to graduate. Just as students have set their course for all corners of the globe, the crows will soon take flight wherever the wind takes them. Bird watching or people watching during finals season this year will give you a prime example of the post-graduation planning sessions and Monster Energy-fueled finals panic happening all over campus.

Our reporters stopped a few crows on Kerrwood Lawn during a planning session of one member of Westmont’s murder as they strung leaves on red thread to ask about their plans to keep in touch with one another this summer. “First,” one crow began, “we are planning a day when we will all fly from wherever we are spending our summer to some centralized location. The only problem is, since we are going to be so spread out, the only spot that is about the same distance to all of us is Antarctica.”

Another crow piped up, “We also could do a road trip of sorts, where we each just visit each other on our own at some point. However, most people are really busy, so only three of us can actually commit to doing that.”

A third crow, who was much quieter than the others, offered, “We could always just schedule zoom calls.”

The raucous that followed this suggestion was overwhelming; all the crows began cawing at the quiet one until he flew away to safety. It was difficult to translate the loud series of accusations and squawks, but our translators were able to pick up some cries along the lines of, “Never again!” “How dare you say the forbidden word!” and “That doesn’t exist anymore, don’t you remember!”

The only crow who didn’t join the ruckus, was one of the rare, elderly crows on campus. She told our reporters that, back in her day, she and her friends made all the same arrangements. “None of it actually happened, of course,” she stated, “we made big plans and never acted on any of them. It wasn’t until this past year, when we all went into retirement, that we finally saw each other again.”

When asked about retirement, she told our reporters, “It’s been great! Retirement is when a crow really comes alive. The last years of our lives are quite a party.” She continued, “Since retirement, my old college friends and I have gotten back to our tomfoolery. So far, we’ve rifled through the DC trash cans, won a game of Nutball against the squirrels, and interrupted a proposal by the DTR pond. Doesn’t the ring look much better on me?” She lifted her foot to display her bedazzled anklet that did, indeed, look very nice on her.

The conversation was cut short by her friends flying by and beckoning her to race them on Dr. Axessibilitea’s parkour path.

As students follow their corvid counterparts to the far reaches of the world, the Capstone too, must take flight. We plan to return soon … somehow … we’ll figure it out. Until then, have a great summer, and we’ll see you at retirement!