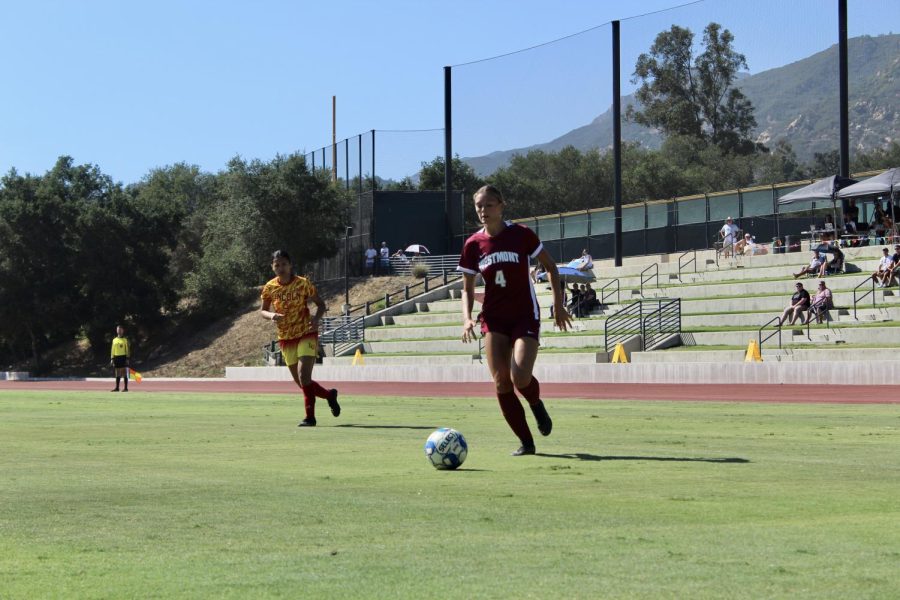 Fourth-year Sadie Hill takes the ball up the field vs. Lincoln University.

The 85th year at Westmont has begun and the Westmont women’s soccer team is back on the field. Last year, the Warriors finished in the Golden State Athletic Conference (GSAC) undefeated with six wins and two ties. Overall, they completed the 2021 season with a total of 13 wins, two losses and five tie games. Being ranked number nine in the NAIA National Championships, the Warriors have high hopes and goals for this coming season.

As stated by fourth-year team captain, Reese Davidson, “with a balance between young and mature players, we’ve been able to bond and start building chemistry early on.” This team dynamic will help the team stay steady and strong throughout the season. Thus far, the team is undefeated in the season with two ties against Saint Katherine University and Westcliff University. Hopefully, these ties will motivate the team to execute wins in future games.

To date, the Warriors have had an average of 2.43 goals per game–with a total of 17 goals in their five recorded games. This is far better than their opponents in the GSAC who average a total of 0.43 goals per game. The GSAC games begin September 29 against Ottawa University in Surprise, Arizona. They will then play seven more conference games before the GSAC quarterfinals.

As the women head into their conference games, Davidson expressed her personal goals for herself and for her team for the coming weeks. These goals include “[working] on organization and patterns through the midfield and working on the quality of our passes and shots in the final third.” The team appears to have bright eyes and active minds. The women are ready to work hard, improve and grow both as individuals and as a team.

Having a large number of both seniors and freshmen on the team has helped to vitalize guidance and strong friendships on and off the playing field. Davidson stated that the leadership at hand is strong and encourages the team to carry out the long lasting expectation of excellence left by former players. The team is doing extremely well with outstanding talent like second-year Jillian Geist and first-year Amelia Villa, both of whom Davidson pointed out display “maturity and confidence on the field.”

Makenna Meyers, a defender for the team, is hopeful that the Westmont women’s soccer team has the potential to stay undefeated throughout the season. She believes the team’s strengths include “possessing the ball and staying calm and composed during games.” Her positive and diligent attitude aligns with the team’s mood and mojo. Although the team uplifts each other and can persevere through games, Meyers stated, “we have been moving the ball really well our past few games however some things we can work on is being stronger and more aggressive both offensively and defensively when in the box.”

The Warriors are off to a great start and are headed in the right direction as the season unravels. The team is known for their emphasis on being fit and working hard. They also continuously intimidate their opponents each time they step foot on that field. After their first conference game on Sept. 29, the Warriors will compete against Arizona Christian University in Glendale, Arizona on Oct. 1 and once more on Oct. 8 at The Master’s University in Santa Clarita, California before their homecoming match against Hope International University on Oct. 15.