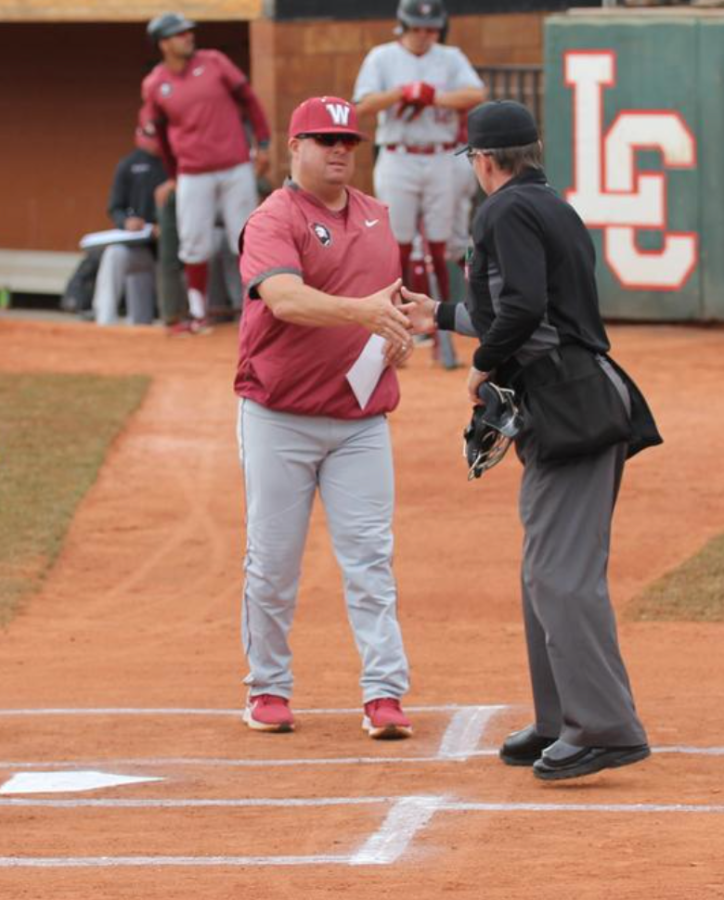 After coming off of a record-breaking baseball season, coach Robert Ruiz has made his return to Westmont in a new way: as director of athletics.

This switch within the athletic department happened only a matter of days after Ruiz took his team to the 2022 NAIA World Series for the first time in Westmont history, causing the transition to be a bit more dramatic than usual. Even with the chaos of the transition, Ruiz has handled this new position with poise and confidence.

I had the opportunity to sit down with our new athletic director and ask him some questions about his role in the Westmont athletic department.

Q: How has the transition been to your new position?

A: “It’s been a bit of a whirlwind. I finished out the baseball season for 2022 and had a historic run. We went the farthest we’ve gone in school history which stretched this decision out into almost the beginning of June. It was a very memorable and special way to close out my career as a coach so I feel very grateful for that. Even the moment where we lost in the World Series, that point I knew I was accepting this position so I was filled with a lot of emotion but mostly I was filled with gratitude for the opportunity that the college has given me to be the head coach for 13 years and to have the chance to serve the number of student athletes that I have had.

When the tournament was all over, we got back on a plane on a Tuesday night, and the next morning we had to have a team meeting. I announced my decision to accept this position and from that point until today, I have felt like I have been on a full sprint. There was time spent with my players letting them know my rationale and decision and also that we will hire a new baseball coach that would carry on things that we had built. I then went into hiring mode with the baseball team and we were able to do that successfully over the summer. Then, I got on a phone call with the NCAA on July 14 which got us into the division two process. Now it is figuring out the provisional membership in year one of the NCAA and additionally being involved in two conferences as of right now. It has been busy and a lot of fun! I am very grateful to be in this position.”

Q: What are you most looking forward to in this new position?

A: “I think there are a lot of things that I know I am looking forward to and I also know there are a lot of things that I will encounter in this position that I am not even aware of that I will love and enjoy. I will say that early on in this role, I have been able to identify something that I really love and appreciate is my ability to spend more intentional time with athletes from all of our programs. Some alumni have reached out to me and told me that I have the ability to make a greater impact, and that is the goal. The opportunity to be more present with the teams is something I look forward to. Also, building our resources for our students is allowing us to put our students in a position to have the best student-athlete experience. We are always trying to fine tune things and make them better so that incrementally over time we are growing and staying committed to excellence.”

Q: What kind of culture are you hoping to promote here?

A: “The athletic department, over the last 13 years I have been here, has grown a lot. I have seen everything from our winning percentage to our retention, have gone well under Dave Odell’s leadership. I hope to build off of his foundation and success that he has rejuvenated in our athletics department. I also know there are challenges that lie ahead of us. Culturally, I would hope we are a department that is a positive reflection of the college. I hope our athletes can integrate themselves into a larger Westmont community. I really want to get back to student engagement with athletics, a lot of that was lost because of COVID-19. I will spend time on both sides of it, internally and externally.”

Q: Something that the school’s mission has been trying to prioritize is a commitment to diversity and justice. How do you think that plays a role in the athletic department?

A: “I think it plays a very important role. Since helping in the department, we have worked closely with our Title XI officer to make sure that we are regularly trying to do so. We are trying to be on top of our recruiting practices, our hiring practices, and that we are paying close attention to issues of diversity. We want to be a partner with the college and I think my role, being a full time athletic director, is to be more committed to engaging in a number of things across campus.

We have engaged in a lot of dialogue across our department when some issues were very prevalent in popular culture. What is encouraging to me is that those conversations have continued and did not die out because it wasn’t in popular media anymore. With everything else, my hope is that we are figuring out where we can get better and having those productive conversations. Moving forward, with the NCAA, there are required committees that will be created on campus that will focus on some of these specific topics. Every committee that we are required to add I see as positives to building our athletic program. We will continue to build off of the good work that has already been done and we will work with Edee Shulze and Student Life to promote commitment to these areas.”

Q: How has the move to NCAA Division II been?

A: “There is so much unknown right now. The key piece is that there is a three year provisional process. This year, we play a full NAIA schedule and can compete for national championships, but starting next year, we play a full NCAA schedule and will not be postseason eligible for those two years. I think we are moving back into a conference with historic rivalries which will be very exciting for our students and alumni. There is a perception with division II athletics that there is a bit of a step up in competition but I think we are prepared and there will be some adjustment and transition. I think, though, that the quality of facilities and opponents will be a nice change for our student athletes. Additionally, the NCAA has a lot of things in place to help with the protection of our student-athletes to help their experience and allow them to be students. We have had compliance meetings with each of our teams, letting them know the subtle changes that will occur, but it is not drastic. All of this work is for a good cause.”

I am very thankful to have had the opportunity to talk with coach Ruiz. It is clear that he is committed to the well-being of our students here at Westmont College and we are truly excited to see all of the changes being made put into practice. If you see Ruiz around campus, make sure you say hello and ask him about what is happening in the athletics department!