Homecoming: a testament to Westmont’s impact 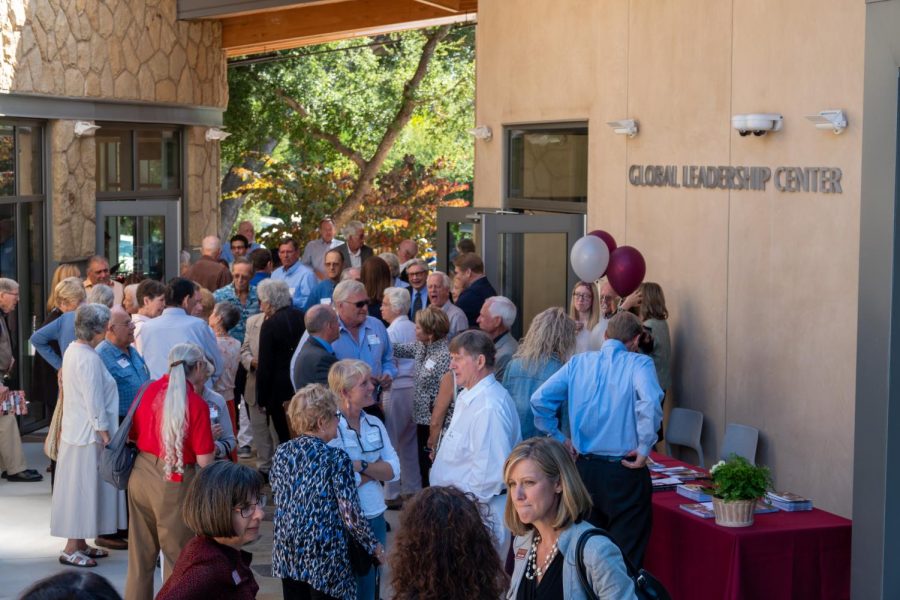 Alumni and guests gathering outside the Global Leadership Center to begin their Homecoming Weekend.

Tables of alumni scattered First Presbyterian Church Saturday evening as conversation floated through the air. At Homecoming’s All-Alumni Reception, friends caught up, families lounged together, and new, intergenerational acquaintances were made.

Marcy Tuttle (class of 1953) sat quietly with Arthur Nelson (class of 1952). “We’ve been friends forever and we’ve been dating for 12 years now. We just celebrated our anniversary,” Tuttle shared. “Our first date was at Homecoming at Westmont.”

Nelson and Tuttle met when they were both sociology majors, but, according to Tuttle, they “didn’t know each other well then.” She later continued, “The campus has completely changed since we were here. It was very small.” Nelson chimed in by saying there were “198 students” on campus then. Tuttle had lived in a building called Emerson that was off-campus, on Ashley Road.

Nelson noted that Kerrwood Hall is the only structure that’s the same as when they were students. But the most notable change inside Kerrwood is that next to the stairwell there used to be a telephone switchboard. Tuttle said she had worked the switchboard while Chapel was taking place in the other room, so she “got paid for going to chapel!”

Nelson then reminisced about his life after leaving Westmont: “I graduated on Friday, and that was during the Korean War, so Monday I reported to Fort Ord and then ended up two years in the 28th Infantry Division in Germany.” After that he went to graduate school at UCLA for a master’s degree in social welfare. He came back to Santa Barbara and worked as director of the Santa Barbara County Welfare Department, while simultaneously teaching at Westmont and UCSB. “I had three jobs that I worked for quite a few years,” Nelson said. He was a part-time faculty at Westmont from 1957 to 1987 teaching “social work, social welfare courses” in the sociology department.

Tuttle said, “I enjoyed sociology,” but after college she became a teacher for several years, at one point teaching at Cold Spring Elementary School. She also worked part-time at Santa Barbara City College in admissions for 29 years. “City College is a wonderful school, I still have a lot of friends there.”

The couple shared that they come back to campus “quite often” to go to music and theater events. Although she didn’t realize it at the time, “It was a very wise choice [to come to Westmont],” Tuttle said.

A few tables away, Gene Grimm (class of 1998) and his wife Krista Grimm (class of 1999) sat with their young girls, Josephine and
Rosemarie. Gene and Krista enjoyed showing their college campus to their girls, especially taking them to the soccer games, kids fair and the Observatory. “We remember our time here fondly,” Gene said. “We like coming back to Santa Barbara.” Westmont is an important part of their family, as many of their siblings and sibling-in-laws went to Westmont as well.

Gene studied physics at Westmont. After that, he “went to UC Santa Barbara, got a PhD in electrical engineering, and then went to Raytheon and worked there ever since.” Krista studied biology, continued her education in medical school, and is now a pediatrician. Krista told the Horizon that they met in class: “we had chemistry and some classes together … we were lab partners for part of it.” Although both were in the hard sciences, according to Gene, they enjoyed the “liberal arts focus and the breadth of classes” students are encouraged to take outside of their major.

Returning to campus from their home in El Segundo, Krista and Gene noticed a lot of physical changes, namely the new buildings. Where the Global Leadership Center now stands, Krista said that “area was forest, and then up the hill were two houses, a bigger one and a little one called Cottage. I lived in that one my senior year. Myself and two roommates.”

When asked about the addition of Winter Hall, Gene explained that the physics department during his college years was in a quonset hut next to the library where the new parking lot is. Krista described a quonset hut as “an old, army barrack-type building.”

Recounting experiences such as these, Krista added that coming back for Homecoming “reminds us of our time here … we had a really good time.”

At the end of the reception, Dr. Reed Sheard, Vice President for Advancement and Information Technology, and Dr. Michael Shasberger, professor of music, both echoed the significant role Westmont plays in people’s lives. The room was full of happy memories of college and hope for current and future students.