A partnership between Joffee Coffee and Convene Roasters. 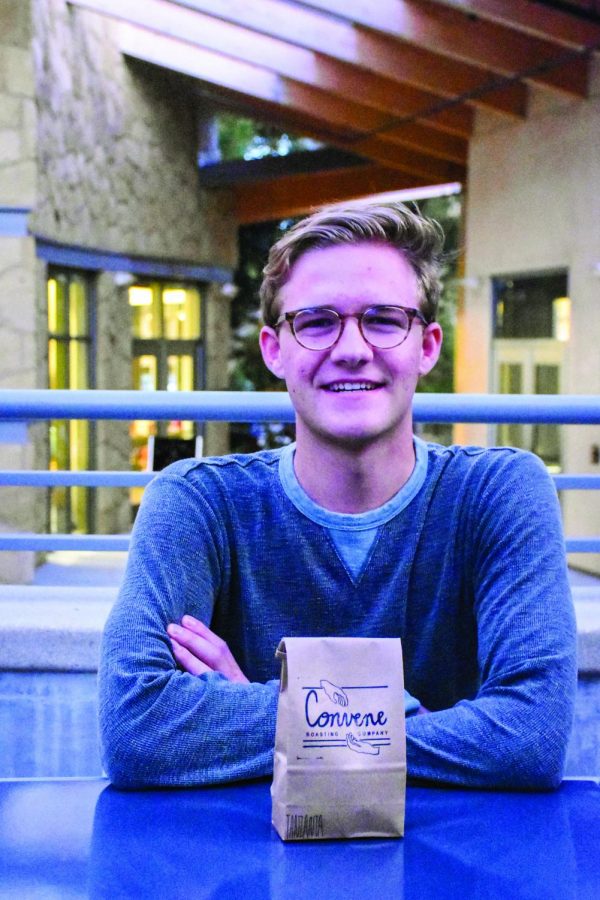 Sophomore Sam Wetzel learned how to source and roast coffee beans from a roaster from San Luis Obispo who grew up in Guatemala.

It would be difficult to run any coffee business without the reliability of a consistent bean provider. Thus, the relationship between the two student-run businesses of Joffee and Convene budded.

After discussing their respective visions for coffee, Josh Azan and Sam Wetzel partnered in their respective entrepreneurial pursuits. Azan’s inherent demand for beans was met by the supply of Wetzel’s ethically sourced beans.

Wetzel, originally from San Luis Obispo and now in his second year at Westmont, started Convene Coffee several months ago as a means of reaching people “with some sort of conversation starter over a medium that everyone loves. And, everyone loves coffee.”

He admits this desire to reach and love people has been his motivation all along, which helped in part to inspire the name Convene.

When he knew he had the desire to learn more about roasting and selling his own beans, he met with a local entrepreneur from SLO who grew up in Guatemala. He connected Wetzel with a local roaster, Shawn Clark, owner of Cacti Beans.

Wetzel spoke about the fact that Clark “really needed buyers, but his coffee was one of the best quality coffees that [he has] ever had.”

Clark’s beans come from Sweet Marias, a local SLO importer who imports from only ethically sourced and fair trade farms. So Wetzel was offered an opportunity to work alongside Clark, where he learned about roasting coffee, selling coffee, and how to start a small business.

“My mission for now is to make as much of an impact on the global economy of coffee as possible.”

“My mission for now is to make as much of an impact on the global economy of coffee as possible,’’ says Wetzel, who is just starting small by selling about 10 pounds of coffee a month.

By consequence, Wetzel strongly advocates on behalf of a fair-trade process of “getting the beans from a farm to your physical cup.”

He spoke to the fact that all the farms he indirectly works with are family-owned and operated. They will grow the beans, harvest them, and finally soak them and dry them. Since the final steps of washing and drying are quite hands-on, “at many farms, employees are often overworked and underpaid.”

So he stressed the importance of connecting with both ethical roasters and importers.

An ethical importer will personally come down to a farm and will “invest in the farmer and treat him as a business partner and friend,” according to Wetzel.

Lastly, Wetzel’s final step is to sell to an ethical buyer, which is where Joffee comes in. “Selling to Joffee has been a very cool opportunity because Josh is not only a very consistent, honest customer, but people have also loved the coffee,” says Wetzel.

Azan, originally from Jamaica and now in his third year at Westmont, spoke to the fact that he was disappointed by the grumpy faces he saw wandering into Ritchies’ Place, where students merely “settle for inferior coffee because of the convenience of their flex dollars.”

But he confidently shared that there is no need to give up a quality cup of coffee for the sake of what seems to be more convenient.

“Students merely ‘settle for inferior coffee because of the convenience of their flex dollars.’”

Further encouraging this, he added that “once people taste a difference between my coffee and coffee provided around campus, they will realize their need for Joffee.’’

In fact, Azan has created this on-campus coffee business in a purposeful way, appealing to the desire for convenience of Westmont students.

So Azan took The Horizon through the process of how to get a cup of Joffee coffee, whether that be cold brew, espresso, pour over, or his own original drink and bestseller, the “Funky Matcha.”

He laid out instructions by saying that “a student must go onto @joffeehouse Instagram and DM me their order. If I am not in class, I will say yes. And if I am, they are welcome to go get cold brew from my room or I will give them an alternative time when I am available.”

From this point, the student can pick it up in his room, VK I3, or in certain cases, Azan will meet the student somewhere more convenient.

The relationship between these two entrepreneurs is one that is encouraging. It reveals both the intentionality and ethical motivations of young people today.

Even further, both Azan and Wetzel are likely looking to continue their entrepreneurial pursuits in looking into starting their own respective coffee shops one day.