Artist of the week: Alyssa Beccue 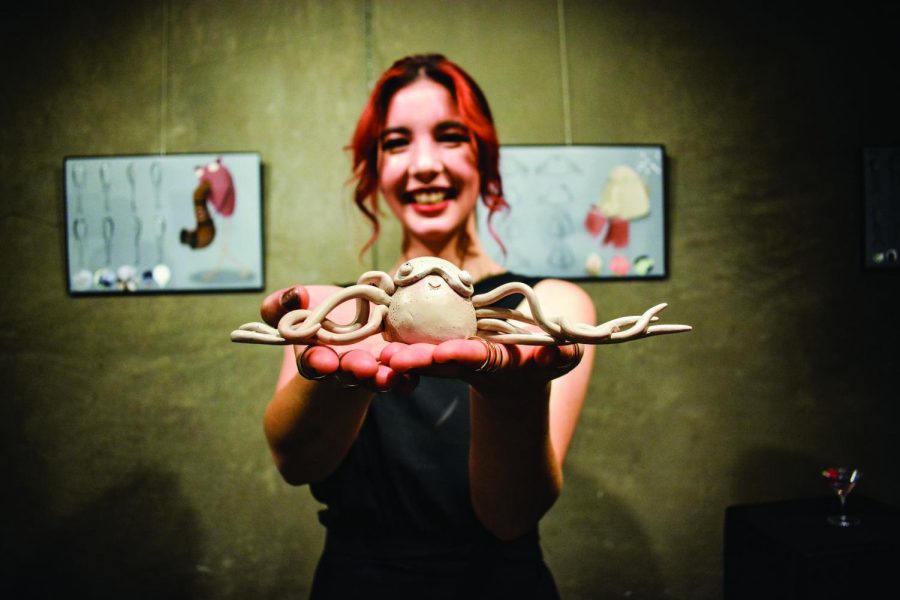 Alyssa Beccue’s “A Cocktail Lounge in Space” will be on display on the ground floor of Adams Center until December 6.

Out amongst the stars, somewhere in the expansive void of space, far in the distance lies a jazz enthusiast gathering of extraterrestrial beings — imagined by senior art major Alyssa Beccue in her latest project, “A Cocktail Lounge in Space.” The project opened Nov. 18 and runs through Dec. 6 in the gallery space on the first floor of Adams, comprised of primarily digital paintings with an intermingling of sculptures.

Beccue began the project over the summer, when she was inspired by co-workers at her internship at a video game company. “They gave me some really helpful suggestions of what kind of work I should be doing if I want to build up a good portfolio to go into character design in the entertainment industry,” she says. “That inspired me to the idea of creating a body of work that focuses on character design,” she continues, “and I decided to center around the theme of an alien jazz band.”

As the project pushes boundaries and thinks creatively outside the box, it comes as no surprise that Beccue’s primary sparking question was this: “What would music be like if instruments were designed for non-human creatures?”

The idea came to her while driving home from her internship one day, after discussing character design with her colleagues. Explaining how she had “already been curating a playlist on spotify that reminded me of space jazz,” she elaborates that “the ideas just started flowing for other works of art that would work into that genre.”

Hoping for the exhibition to be an “immersive experience” for everyone, Beccue will be dressed in appropriate space cocktail lounge attire, offering photo books of the paintings for sale, and welcoming people to see all of her concept art for this project in one place.

“This is the most ambitious thing I’ve ever done in terms of amount of pieces,” she admits, revealing the total amount of 34 prints. She began her work in August, and has continued developing it over the course of the semester. She claims that the process has been particularly difficult, as it is not part of a class, and all deadlines are self-imposed. Despite this, she greatly enjoyed creating all of the pieces, and hopes her audience will equally enjoy viewing the work she’s put on display, explaining, “When they’re displayed next to each other, they really speak to each other.” It’s a conversational art.

A Cocktail Lounge In Space is available as a playlist on Spotify which Beccue has personally curated to inspire the art and which has also been inspired by the art, and there will be a QR code at the display to access it. Beccue and more of her art can be found on instagram by following @slightlytransluscent.