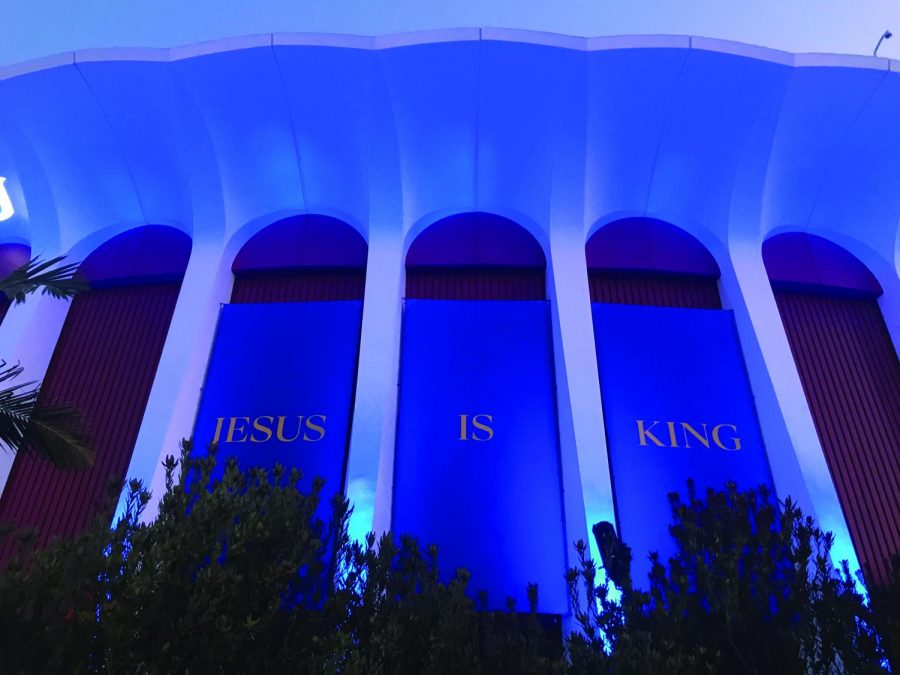 Kanye West has held his “Sunday Service” at the Forum in Los Angeles four times so far.

Outside the Forum, a crowd runs through the narrow doors, holding overpriced beer and wearing t-shirts with crucifixes and the emboldened script “Jesus is King” posted on the front. Alex Carter, a senior at Westmont, described the scene, saying that as she entered into the arena, she saw “trees and flowers of all kinds and colors. I heard the chirping of birds echoing around me. I was transported back to original design: the garden.”

Sitting down in the arena, one may see a woman and her son sit with Bibles on the left, poised for a traditional church service. To the right, a bearded man with a beer in hand and a shirt from Kanye West’s 2012 North America tour seems to have added “Kanye’s Sunday Service” to his itinerary for a pleasurable weekend. The crowd itself is unique, and phrases ranging from “Praise Jesus” to “You’re my Chick-Fil-A” can be heard throughout the sold-out arena.

While addressing the crowd at the Forum, Kanye shared that he had dreamt of having a church and place of worship, but was told by critics that he alone could not start such a church. Motivated to prove them wrong, West invites three pastors to his Sunday Service each week to share the Gospel with the sold-out crowds.

Last Sunday, pastors Rich Wilkerson, Kerwin Lee, and Michael Todd each proclaimed a short homily, ending with Todd openly calling on the crowd to pursue a life in Jesus through an altar call. Grace Condello, a sophomore at Westmont, attended and observed that “there was actually a significant amount of time in the service spent preaching.”

The service itself was roughly three hours of worship. Individuals who came to watch Kanye at a concert were surprised to find the artist standing within a choir proclaiming the good news and rarely taking the microphone for a solo.

The choir itself was made up of around 150 individuals singing hymns and West’s work from “Jesus is King.” Each member wore the same blank clothing, including Kanye West. Condello was amazed by the singers: “I’ve been in choir for over ten years, and have never heard a choir that full and powerful. The quality of the instrumentalists, choir, and featured vocalists gave me goosebumps for almost the entire service.”

The lighting, merely a spotlight on the choir, was simple and seemed to ensure that this “concert” was fundamentally a church service.

The service seemed to prove the authenticity of Kanye West’s faith. Jaclyn Smith, a senior attendee, believes that those outside Christianity “encountered the presence of God whether they knew it or not.” Critics accused Kanye’s faith of being an unsustainable fad that will dissolve with time, but no matter the truth of their claims, it is undeniable that at least for now, his heart has changed.

In addition to welcoming in others to worship, Nathan Chen, a senior attendee, believes the service “united Christians from different backgrounds to worship together.” West’s recommitment to his faith gives contemporary Christianity a chance to stop and remember the importance of celebrating the simplicity of the Gospel and its power to change lives across all different walks of life.