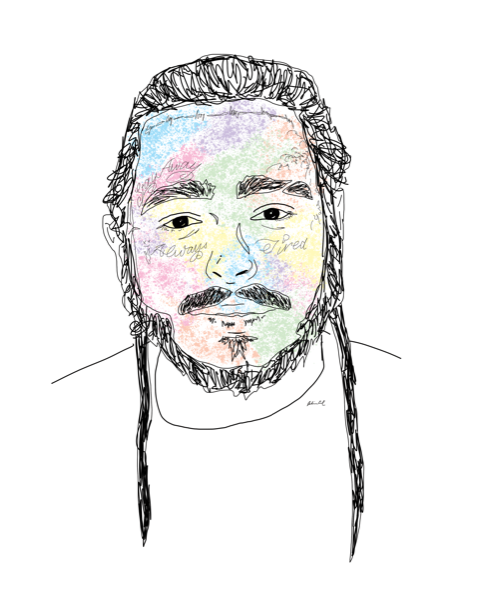 Post Malone recently moved from Los Angeles to Utah, and his new album, “Hollywood’s Bleeding,” confronts being subjected to the greed-driven Hollywood. His music historically has been some of the most upbeat in the industry, but his latest album is sonically and visually darker and more exhausted, without completely discarding the classic positive Post mood.

In Post’s debut LP, “Stoney,” his upbeat lyrics revolve around the benefits of wealth gained from his multiple platinum and diamond hits. But in his second album, “Beerbongs and Bentleys,” his frustration with the music industry begins on the track “Blame It On Me,” which opens with the fibrous lines: “I used to say I was free/Now all these people wanna keep on taking pieces of me/They take away everything, had everything that I needed. They held me down, let me drown/They spit me out right through the teeth.”

“Hollywood’s Bleeding” follows these lines to their fruition, so that every song on the album seems to be permeated by Post’s attempt to escape the  pervasive and corrupt industry. The tracks “Hollywood’s Bleeding,” “Enemies,” “A Thousand Bad Times,” “I’m Gonna Be,” and “Internet” all deal with the problems generated by the entertainment industry. With the context of these darker songs, the uplifting tracks on the album, which would typically be seen as fun songs for the sake of fun, function to combat a constricting and destructive commercial system.

Stylistically, Post drops into a vintage, even historic grit that that encompasses both his visuals and melodies. The video for “Circles” includes Post as a knight rescuing a princess, and in “Goodbyes,” he is a zombie. The tracks “Circles,” “Allergic,” and “Myself” are especially strung with the 90’s alternative/punk inspiration that lead Post’s contemporary influences, like Lil Peep and XXXTENTACION.

On “Take What You Want,” Ozzy Osborne tears through the chorus and helps identify the song with the hard rock of the 80’s, and on “Internet,” Post works with Kanye West to produce a string-saturated track that resembles “Runaway” from West’s album “My Beautiful Dark Twisted Fantasy.”

These aesthetics are truncated in the album cover, which features a low-lit, barely visible Post wearing a 90’s style leather jacket and framed by a medieval arch, broadsword, and skeleton. What better inspiration to clothe an album that deals with fighting evil and a brooding distrust of the industry than knights and 90’s punk rock?

Although Hollywood has clearly had a negative influence on Post, it has not ruined him. With tracks like “Myself,” “Saint-Tropez,” “On The Road,” and “Sunflower,” he maintains his old optimism, even if it seems to be fragilely based in his wealth. Hollywood has bled and will continue to bleed, but it has not fatally damaged Post Malone like it has so many other young artists.