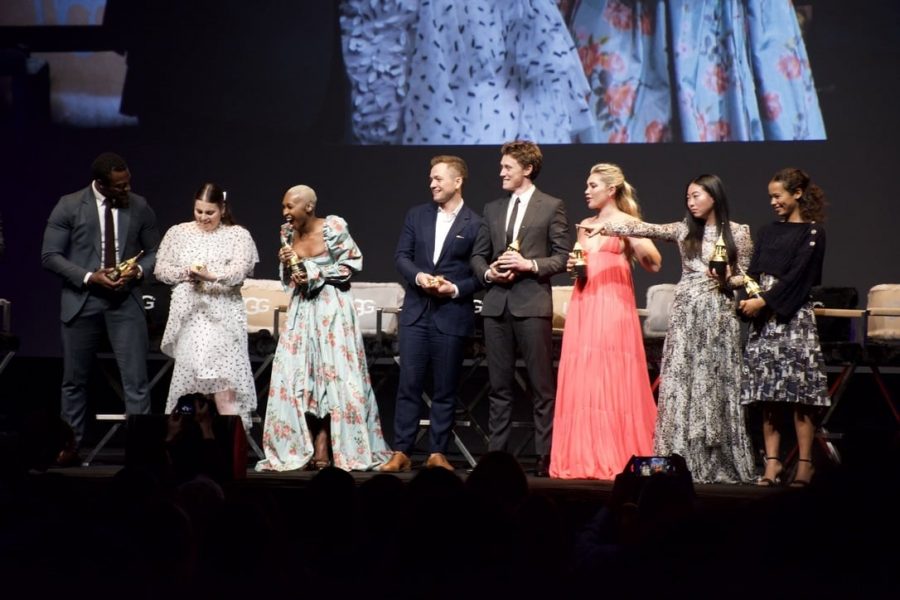 Saturday’s Santa Barbara International Film Festival Virtuosos awards night was a celebration of cinematic representation as a source of emotional power, and a long term investment in those predicted to continually wield this tool to participate in the next era of visual storytelling.

Before moderator Dave Karger began his individual interviews with the actors and actresses Awkwafina, Taron Egerton, Cynthia Erivo, Beanie Feldstein, Aldis Hodge, George MacKay, Florence Pugh, and Taylor Russell, many of the rising celebrities walked the red carpet, commenting on their latest works and posing for photos. George MacKay, who was recognized for his leading performance in the World War I movie “1917,” expressed his pleasure at working with the director, Sam Mendes, whose storytelling “architecture” was inspirational for his performance in the film. Meanwhile, Aldis Hodge, honored for his role in “Clemency,” spoke at length about how his character in the film elevated his understanding of empathy.

Once Karger commenced the formal program of individual interviews, the actors relaxed and revealed more of their personalities, and the atmosphere became simultaneously light-hearted and reverent. Hodge joked about taking the script of “Clemency” without reading it, just because he wanted to work with one of his inspirations, Alfre Woodward, and then seamlessly began to talk about how his acting has been benefited from being surrounded by intellectuals.  Awkwafina quickly developed an ongoing affinity for a certain section of the crowd that was “particularly rowdy,” saying that she wanted to take them home with her, even as she would soon after explain how she shared her character’s immigrant experience and profound dilemma-inducing cultural customs in “The Farewell.”

During the group interview towards the end of the program, when asked “what is your go-to karaoke song?” Hodge started singing “Gold Digger” by Jamie Foxx and Kanye West, prompting Cynthia Erivo, who performed for the soundtrack of her newest movie “Harriet,” to sing “We Don’t Need Another Hero” by Tina Turner. At this, Beanie Feldstein from “Booksmart” pretended to faint in disbelief at hearing her “queen” sing. Taron Egerton, who had been honored for the Elton John biographical film “Rocketman,” went on to sing “Faith” by George Michael.

Among the fun of karaoke performances and bursts of audience laughter, the award seemed to carry more weight when the actors expressed how they had seen their work inspire their viewers. Beanie Feldstein, from “Booksmart” told of the teenage fangirls who would go up and give her hugs when they saw her, and Florence Pugh spoke of fans telling her that they could see themselves in her depiction of Amy March in “Little Women,” in contrast to Amy’s historical depiction and interpretation as singularly antagonistic to her seemingly more moral and brave sister Jo March.

The program was both hilarious and sincere because it was populated by actors and actresses who drew upon multiple attitudes and fields to master their performance. For the recipients, acting seemed to be affected and inspired by seemingly unrelated fields. The Virtuosos were able to speak into the fields of activism, comedy, and storytelling, and Florence Pugh even told the Horizon that the music of Oliver Arnold and Andrew Bird inspired her acting in “Midsommar” and “Little Women,” despite both films having nothing to do with music.

The interdisciplinary and multi-sensory approach used by these actors in their endeavors played a crucial role in their process of becoming part of the architecture of culture, stepping stones by which viewers can understand and draw meaning from an experience. When viewers see an actor embody a role, they witness a performance drawn from and inspired by the entirety of an entertainer’s diverse experience and interests.