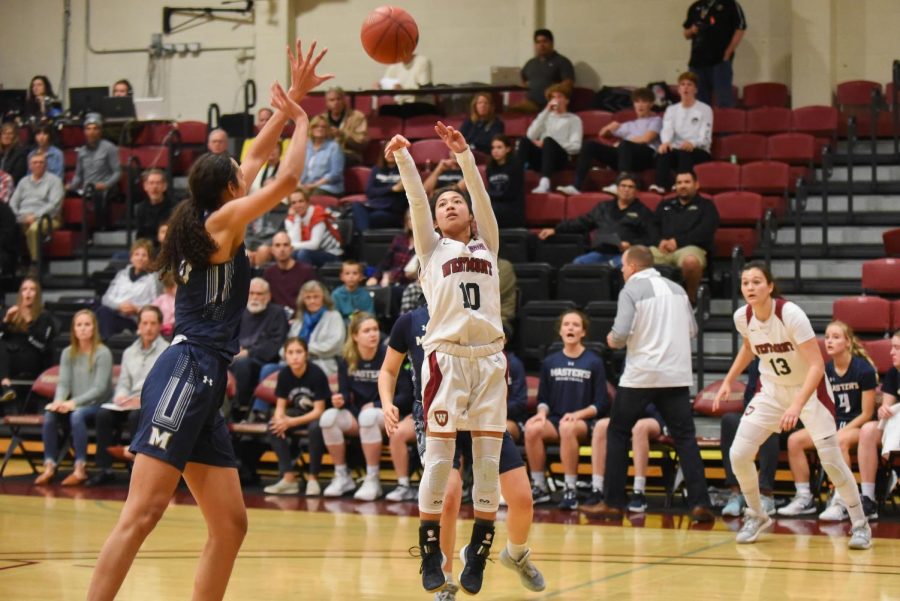 This past Saturday, the No. 4 Westmont women’s basketball team squared off against top ranked The Master’s University. The Warriors are now 6-1 in Golden State Athletic Conference (GSAC) play, while The Master’s remain undefeated in their conference.

The first quarter began with a three-pointer made by junior Lauren Tsuneishi off an assist from sophomore Iyree Jarrett, giving the Warriors their first points of the game. The Warriors took their first lead of the game when sophomore Kaitlin Larson powered in the lane to make a layup, making the score 11-10. After trading baskets back and forth, the quarter came to a close and the Warriors had the lead by one with a score of 13-12.

The second quarter was a consistent offensive battle with both teams scoring on the majority of their possessions. Midway through the second, the Warriors were down 23-21, but then a three-pointer from Jarrett, followed by another three-pointer from sophomore Gabriella Stohl, brought the Warriors into a one point lead. The Master’s could not answer with a basket, which brought the first half of the match up to a close. Westmont sustained the lead at half with a score of 33-32, but The Master’s began to chip away at that lead during the second half. With a close game heading into the half, the fans were all on the edge of their seats cheering on the Warriors.

As play resumed in the third quarter, the Warriors took a three point lead which began with a jump shot from the top of the key from senior Maud Ranger. The Master’s quickly answered with a three point shot making the score tied at 38-38. The Warriors then went slightly cold from the offensive side of things, which allowed The Master’s to score on consecutive possessions, pushing their lead to four. The quarter came to a close with neither team scoring due to vigorous defense of both teams late in the quarter. The score finished at 45-41.

The score was close, and the atmosphere was energetic. The Warriors were looking to come out and make an impact on their deficit right away. Sophomore Gabriella Sothl buried a three that would tie the game at 51-51. This absolutely fired up the home team crowd and had The Master’s on their toes. The Master’s came out of the timeout and were able to score on back-to-back possessions and pushed their lead out to five. Late in the game, The Master’s stretched their lead with a couple free throws and layups that would put the game out of reach for the Warriors. The Master’s ended up winning the game with a score of 64-55.

Jarrett led the Warriors with 15 points, and also contributed four rebounds. Also leading the Warriors in points was sophomore Stefanie Berberabe with 11, Gabriella Stohl with 10, and Lauren Tsenushi with nine.

After the game, we caught up with Iyree Jarrett and asked her about the team’s mindset coming into the game.

Jarrett said, “Going into it we knew The Master’s was going to be a battle. They are a very skilled team, well coached, and always tough to beat. Everyone had a pretty focused mindset and we were really determined to make a statement against them. We knew how we needed to guard each player based on their strengths and we went in with a solid game plan by our coaches.”

The Warriors and Jarrett are optimistic about the remainder of league play, and are very excited to continue to grow as a team. Come out and support the Warriors this Thursday, Jan. 23 at 5:30 p.m., when they will face off against Hope International University!