Students back on campus:

Some say they wish their abroad program had lasted both semesters, others say they are relieved to be back on campus and plan to never, ever, leave. Last semester, a considerable amount of Westmont students participated in off campus programs including a variety of Westmont programs, as well as third party programs. Westmont has a large variety of options for semesters spent off campus, whether studying out of the country, in San Francisco, or participating in the consortium college program.

There were over a hundred students were off campus last semester. It seems a majority of the students that chose to go abroad last semester were juniors. For example, Madison Smoak, a junior herself who went on the Westmont Northern Europe trip, said that “out of 21 students on the trip, 13 of us were Juniors.”

Some students (especially freshmen) who were on campus last semester as well as this current one, feel as though they came back from Christmas Break to a whole new student body. Students are seeing faces in the DC they have not seen before, or haven’t seen in a very long time. Caoilinn McDonough, junior, excitedly exclaimed “Westmont feels like a whole different campus with all the students back from abroad again!”

In these past couple of weeks, students have been readjusting back to life on campus. Kate Johnson, a junior, was abroad through a third party program in Spain; when asked what first came to mind in relation to returning back to Westmont this semester said, “My first thought is that I forgot all my classes would be in English now!”

Christa Kurkjian, a junior who participated in Westmont San Francisco, says, “Even though I’m so happy to be back, I feel like I’ve gone backwards to an extent. I feel like I went from being an independent adult, living in a city, and going to work … to just being a student again. It’s weird.” Kurkjian states that she missed Westmont while she was in San Francisco, and found herself often looking forward to being back; however, she states that she can’t help but miss the city life she grew to love.

Another student, Gloria Tabb, a junior as well, was abroad in Paris, France through a third-party program. She is especially struggling with feeling a bit restless in Santa Barbara after calling the streets of Paris home. Tabb especially emphasized her desire  for the delicious Parisian foods and their pricing methods, stating, “I miss paying four euros for a cappuccino and croissant” (four euros is basically $4, and you certainly can’t get a coffee AND a croissant for $4 at the French coffee shop Bree’osh in Montecito).

As much as most students seem to open their responses to the question, “How has it been returning back to Westmont” with how much they miss where they were last semester, most seemed to conclude that they are relieved to be back and surrounded by the Westmont community. “It’s good to be home again!” says Anna Besh, junior. 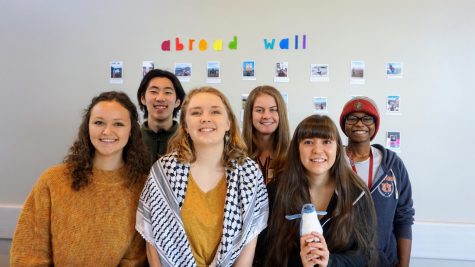