Abram Carrasco has been an impact player for Westmont’s Men’s basketball team this season, and has led them to an overall record of 17-2. In recent news, he has been named the Golden State Athletic Conference (GSAC) Male Player of The Week for the second time in two weeks. This has only been done by three other athletes in the history of Westmont Athletics.

Carrasco is a junior guard from Tucson, Arizona. Before Westmont, he played basketball at Pima Community College in Arizona, where he earned various honors and is the current all-time scoring leader as well. When you watch Carrasco play, you notice that he is an energetic and explosive playmaker, which encourages success in the players around him as well.

Wondering where Abram gets this mindset from, I was asked after whom he modeled his unique and energetic playing style.

Carrasco said, “Damian Lillard because he’s an underdog, which always gives him a chip on his shoulder … which is how I feel when I play the game as well. Every time he steps onto the court, he thinks that he is the best player out there, and I replicate that same energy when I step on the court as well.”

Carrasco’s ability to be a great teammate and lead the Warriors in scoring is a dynamic that allows the team to play well together and ultimately win.

Abram reflects on his team and from where he gains his success, saying “I think the unity and family bond with my teammates has put me in a position to play to the best of my abilities.”

Carrasco was put into a very unique position this season, due to being a transfer student athlete who was expected to come in and make an immediate impact. Stepping into a leadership role is not foregin territory to him, but moving out of his home state and being able to adapt to a new environment is admirable and impressive.

The coaching staff loves Carrasco’s game and have instilled great trust in him to find success for the team.

Carrasco says “The coaching staff has let me come to this program and play the game the way I know how to. My focus has been on winning, but in order for us to do so I need to score and facilitate to my teammates in order for us to continue our success.”

“I’m trying to do my best to honor my teammates and coaches because the brotherhood and family is very important to me.”

The Warriors are currently 6-1 in GSAC play, and sit at the top of their league. You can watch Abram Carrasco and the rest of the Warriors play at home against Hope International University at home on Thursday Jan. 23 at 7:30 p.m. Come out and support your Warriors! 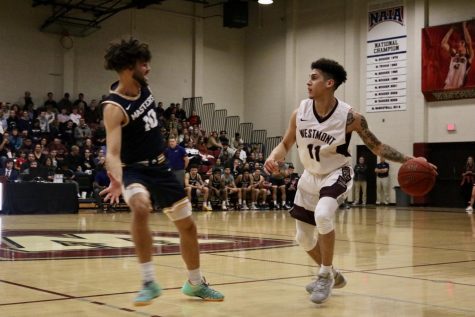