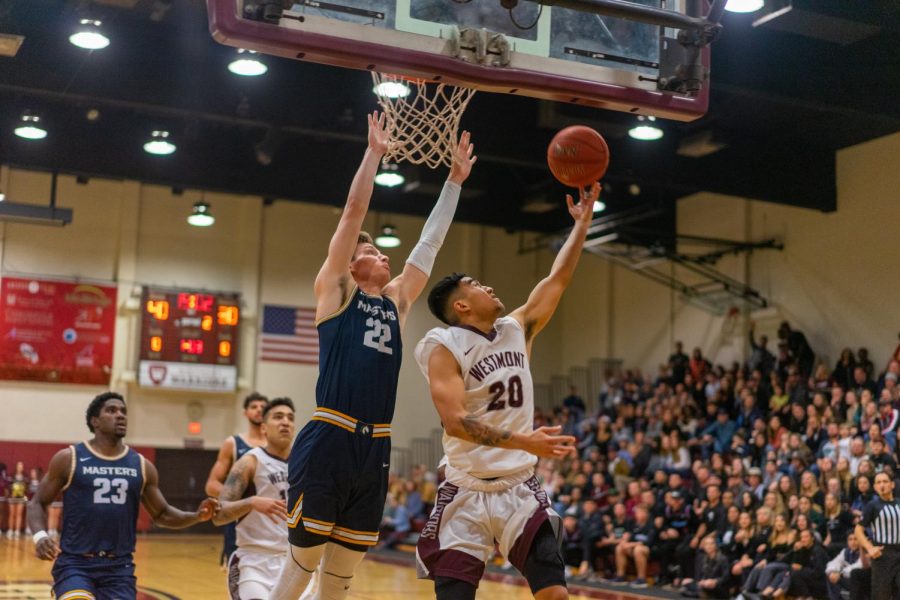 This past week, the 19-2 Westmont men’s basketball team came back from their heartbreaking loss last week with two big wins against Hope International University and San Diego Christian.

“It was a very important win to get our confidence and connectedness back under us,” said Head Coach John Moore.

The first half of the game had viewers biting their nails as the Warriors started off with a 10-point lead that Hope International caught up to by half time. However, the men brought it back together and ended the game with eight 3-pointers on 14 attempts (57.1%) preventing a consecutive loss.

Despite starting the first half with only 34 points, once the second half begun the Warriors were able to make half of those points within the first five minutes. This was enabled by senior Justin Bessard and freshman Jared Brown who hit back-to-back triples, followed by junior Hunter Sipe’s three pushing the score to 54-44 — another ten point lead.

In the end with the help of free throws, Hope International caught up to the Warriors in the last 10 seconds of the game. As the men went back and forth, sophomore Cade Roth finally eliminated all hope of the Royals winning by blocking a 3-point shot. Junior Hunter Sipe was then fouled and scored both free throw shots securing the win.

Against San Diego Christian, in spite of having to traveling and adjusting to a new court, the Warriors were able to tie the game up with a win.

The first half ended with a 13-point lead that was quickly followed by the Hawks in the second half. In fact, the score got to only a single point lead, 45-44, with only 14:26 on the clock. It wasn’t long until it was a tied game of 58 points.

Despite a poor performance in the middle of the game, the Warrior regained their passion and were able to finish the game with a 10-point victory: a 33 point gain over the last 8 1/2 minutes.

This upcoming week, the Warriors have two home games, where they take on Arizona Christian on Thursday Jan. 30,  at 7:30 p.m. and Ottawa University at 3 p.m. on Saturday Feb. 1.