For Westmont student body president and history major Nolan Anderson, empathy and nuance are the core of his studies, service, and community at Westmont.

History quickly became the learning grounds for understanding and bridging perspectives during his study abroad and his service in student government the past four years, as Nolan thoughtfully describes: “The most important thing [studying history] does is that it teaches you empathy. It allows you to really critically, in really well thought out ways, see someone else’s experience and hear about it and say, ‘I may not agree with that, I maybe might not think it’s the right thing, even if it’s against me, but I can understand why you would do that.’” 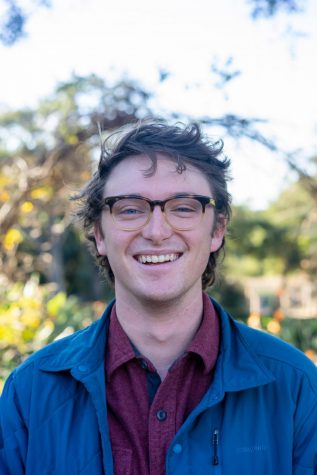 Nolan pauses, “I think that’s allowed me to be a better believer in a lot of ways. The skills that I’ve learned in that and framing and how things are heard has helped me in a lot of other areas in my life.”

“I think that’s why living in nuance is so important. Like I think, again, the history major taught me well, it’s not all this and if it’s simplistic, there’s probably something wrong. Especially working with the administration, other organizations, one thing is nuance,” Nolan comments. “Two, is framing is something that has been extremely important in terms of student government because the way you tell something to the students is not something you would tell something to the administration. Framing that is really, really important because it matters the way in which you say something.”

In the fall of 2018, Nolan participated in the Westmont Downtown program and interned with Santa Barbara county’s local government office. For Nolan, the Downtown program encompassed the first step in exploring public relations and a possible career post-graduation this May: “I can see myself doing something like that or public relations right when I get out, because a lot I talked about the history major is framing and I feel like a lot of that is public relations.”

Downtown 2018 was followed by a second off-campus semester with Westmont in Jerusalem, during which he ran a successful campaign for Westmont student body president. This past year of Nolan’s term as student body president has encompassed meaningful conversations between administration and the student body concerning diversity and on-campus support for different demographics of Westmont’s student body, as Nolan comments, “ Hopefully, there will be more conversations going forward. I think what Jason is doing with the ICP roundtables starting this semester, I’m really excited for. I think that’s going to be a great venue for students to talk and have conversations. Hopefully we can utilize those as feedback from students to see what we’re thinking about these really important issues.”

Ultimately, Nolan is hopeful for this year’s trajectory, especially as Westmont is amidst a year of strategic planning. As Nolan notes, every three years, Westmont undergoes a multifaceted review, including crucial student input as the entirety of Westmont looks ahead.

With graduation quickly approaching in May, Nolan is personally focusing on appreciating the nuances of his own trajectory and community in Santa Barbara: “My goal is to make the most of my time and really enjoy the fact that I have a very flexible schedule and make the most of living with my best friends. Post-Westmont I am hoping to stay in Santa Barbara because I love it and I love the community here. This is too short of a time to be ‘I’m so worried about my grades.’ I’m not going to care about that later in life. This is what I’m going to care about.”