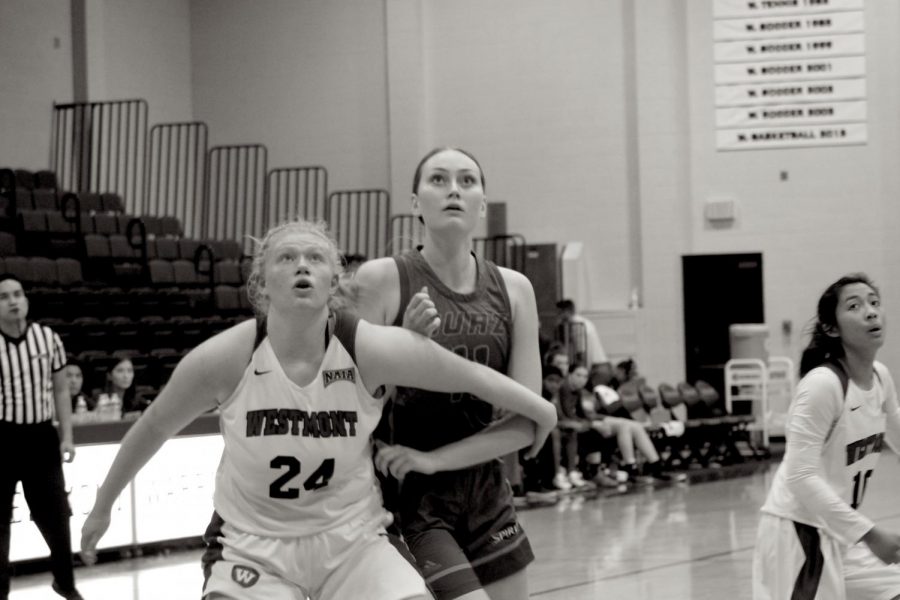 After a successful first round of league play, the Westmont women’s basketball team finished with a record of 8-1. To start the beginning of the second round matchups, the Warriors squared off against Arizona Christian University on Jan. 30.

To start the first quarter, Sophomore Kaitlin Larson powered through the lane and finished a layup through traffic, which was immediately followed by another layup from sophomore Iyree Jarrett. The Warriors slowly chipped away at the Firestorm defense, and were able to extend their lead to 18-13 to end the first quarter.

After the first quarter, it was all Westmont. Sophomore Kaitlin Larson and junior Lauren Tsenushi began to catch fire. Larson scored back-to-back layups in traffic that started the impactful game ahead of her. Tsenushi snuck through the lane and forced a steal, which lead to another Larson lay up. The Warriors were absolutely in control of this game.

Back to back three-pointers from junior Taylor Rarick and sophomore Krissy Mayahara, put the game out of reach in the fourth quarter. The Warriors came out on top with a score of 83-60, pushing their record to 9-0.

After the game, Junior Lauren Tsenushi reflected on how their scheme differed from the last time they faced off by saying “We switched to a triangle and two in order to cover their two biggest offensive threats. That went well for us yesterday because we held both of their leading scorers who averaged 18 and 15 points per game to only 11 points combined. That was huge for our success.”

Leading scorers of the game were Kaitlin Larson with 25, and Lauren Tsenushi with 15.

Next, on Feb. 1 the Warriors had another inter-state matchup with OUAZ to round up the first week of the second round of GSAC play.

The Warriors continued their streak of offensive scoring right out of the gate. After three 3-pointers by Senior Maud Ranger in the first half, the Warriors began a run that OUAZ would not be able to come back from. The first half concluded with a score of 28-19 in favor of the Warriors.

In the second half, Sophomore Iyree Jarett and Tsenushi scored on consecutive possessions, pushing the lead to 56-37, which gave them the biggest lead of the game. After various other players scoring, the Warriors were able to keep the lead and come out on top with a score of 70-48. Leading scorers of the game were Junior Lauren Tsenushi with 18 points, Sophomore Iyree Jarret with 15, and Senior Maud Ranger with 12.

Up next, The Warriors will play William Jessup at home on Feb. 6 at 5:30 p.m.. Come and support your Warriors!