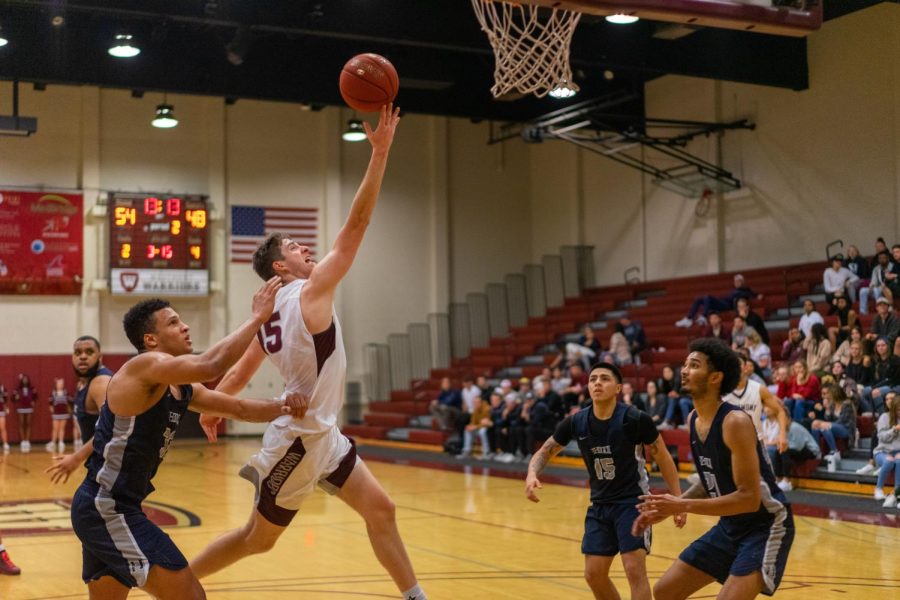 Men’s Basketball went 2-0 this past week, beating Arizona Christian Thursday night and Ottawa University on Saturday. The Warriors enter the second round of conference play with these two wins, keeping their number one ranking in conference.

On Thursday, against Arizona Christian the Warriors started off fast and strong coming out of the first half leading with 19 points. Abram Carrasco had a strong presence in the first half, contributing 20 points.

In the second half, we saw more out of other players, stepping up after Carrasco was caught in foul trouble early in the second. Justin Bessard played a key role in the win over Arizona Christian, earning a double-double. He was the leading scorer and also had the most rebounds. Bessard had 23 points and 13 rebounds against the Firestorm. Other leading scorers include Cade Roth with 13 points and Hunter Sipe with 10.

After the game, Justin Bessard reflected on the team’s mindset as they entered the second round of league play by saying “Everyone on our team does not want to be complacent, we are number one in the league right now and we have goals to win a GSAC championship and a National Championship.”

“We want to continue to grow together and work on our game to push through this next round in order to stay at the top. We have the teamwork and abilities to do it, we just have to put it all together in order for our success to continue. Everyone is in a great state of mind as we continue in league play”

On Saturday, the Warriors came out with a dominant presence over Ottawa University Arizona, scoring 53 points in the first half. Jared Brown set the tone of the game, hitting a 3-pointer within the first 10 seconds of the game.

Following him, Carrasco and Tyler Austin scored their own runs of points which helped lead the Warriors to a 53-32 lead over the Spirit heading into halftime. Just like the Arizona Christian game, Bessard, gets another double-double against Ottawa. He finished the game with 17 points and 13 rebounds.

Gyse Hulsebosch also was impactful in this matchup, especially in the second half where he was absolutely lights out from beyond the arc. He was the second leading scorer in the match with 18 points, scoring a majority of those points in the second half of the game.