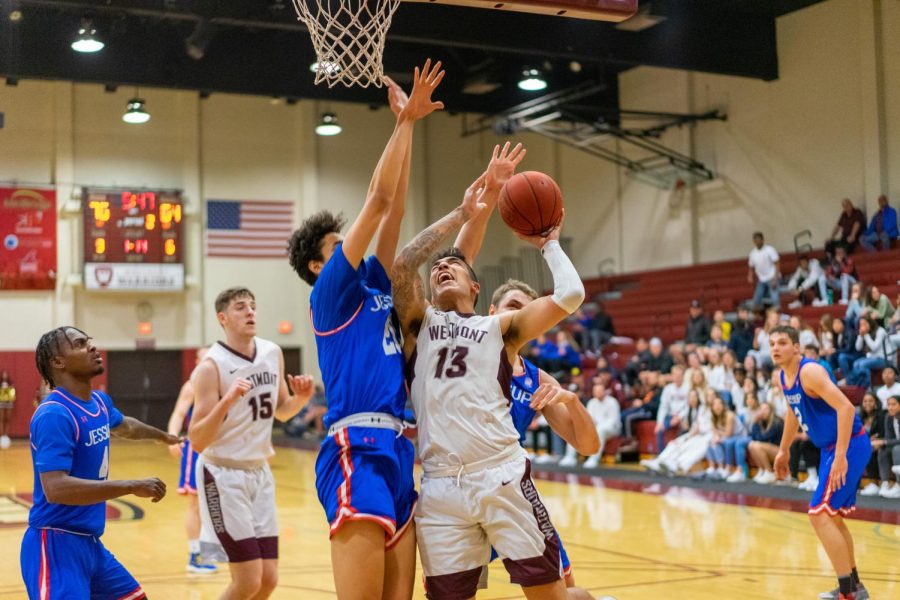 The Warriors had another exciting win against William Jessup on Thursday in the Murchison Gym. Leading the team was junior transfer Abram Carrasco. He single-handedly scored 31 points and 10 assists, a personal career high since wearing a Westmont jersey.

“If I calculated correctly, it was somewhere in the fifties of how many points he was responsible for,” said basketball head coach John Moore.

Starting of the game, Westmont trailed behind William Jessup, but quickly overcame

the team at the turn of the second half after the Warriors shot eight 3-pointers to take a 14-point lead (52-38). More impressively, the Warriors had zero turnovers in the first half.

The team’s defense, which forced William Jessup to have 11 turnovers in the first half,

Despite the lead going into the second half, William Jessup was quick to catch up,

cutting the lead to a mere four-point lead with their three triples on consecutive possessions. However, after an empowering time out, the Warriors came back to being back a double-digit lead with 13:15 left in the second half.

At the end of the game, the Warriors claimed a spot in the GSAC Tournament as well as

maintaining the two-game lead in the conference standings over Menlo.

This Saturday, the Warriors faced off against Menlo, claiming yet another victory.

Carrasco struggled with foul trouble, limiting himself to only 19 minutes of play. Additionally, less than eight minutes into the game, Cade Roth was also pulled out of

the game due to an injury.

“I can’t say enough about our bench. When Cade and Abram went down in the first half, guys like Noah Fernando and Gyse Hulsebosch, Tyler Austin, and Tristan Lloyd gave us very good minutes,” said an excited Moore.

With a strong push from the Oaks, the Warriors were left behind with a nine-point

lead in the first 6 1/2 minutes. However, the defense started to kick up and with that the offense, allowing the Warriors to gain a lead by 11 points (35-24).

Starting in the second half, Hunter Sipe shot a 3-pointer, giving the Warriors a 16-point buffer in the first 7 1/2 minutes with a total score of 61-45.

The Warriors and the Oaks were going back and forth throughout the second half ,

and even Moore commented, “… Menlo was shooting at a high level. John Paine is one of

to hold him scoreless in the second.”

Needless to say, the Warriors had a great defense. The game ended with a final score

Overall, the Warriors now have five games left in the reg-ular GSAC season. With this

win, the Warriors now have a three-game lead over Menlo and Arizona Christian, who

are tied for second.