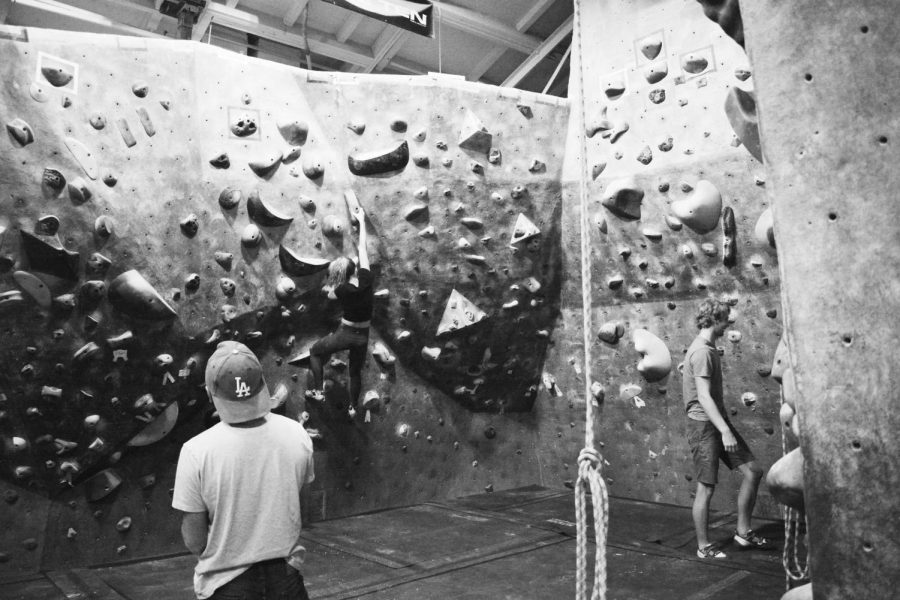 Santa Barbara Rock Gym, neatly tucked between Dawn Patrol and State Street Boxing Club, has cultivated local climbing interest for over a decade. It’s discreet and small appearance has kept its doors from flooding with tourists while maintaining a bustling crowd of devoted regulars.

This gym has the kind of community you would expect of Westmont, small and close-knit. Second-year student and gym climbing enthusiast Sebastian Alvarez comments, “You see a lot of the same people when you walk in — you recognize them and it feels like a community.” Alvarez noted that he climbs two to three days a week at the gym, which provides him an excellent workout including core and strength building.

Despite the strenuous and challenging routes, climbing at Santa Barbara Rock Gym has a beginner-friendly environment. “It’s almost impossible not to talk to people,” remarks first year Blake Labrie, who is also a Santa Barbara local.

The supportive environment encourages youth to the demands of the sport and fosters seasoned athletes to hone their technique.

Santa Barbara’s future of climbing is investing in their youth. Two teams of the gym meet twice a week, ranging from grade school age in the lower team to high school in the upper team. Mike O’Connor, who runs the gym’s teams and does much of the rock setting, is also the main coach for the gym.

Climbing in and of itself is a full body workout but a mental challenge as well. Labrie likened the essence of the sport to a mental and physical puzzle. He says “being able to figure it out on your own, and if not, asking people will always be an option.” Labrie stated that the regulars are very open and accommodating to questions and tips.

In addition to the hospitable regulars, the staff at Santa Barbara Rock Gym are equally as conscious of their presence and impact within the local climbing community. The employees are regulars themselves who interact with the other climbers, which creates an engaging and accessible atmosphere. New routes are set every week by employees and regulars who help out.

Chandler Kilpatrick, a second-year student and current employee talks about an “outdoor ethic” that the gym possesses. He says that, “Climbing was going on in Santa Barbara pre-2007 which translated into the gym.” The rock gym encourages those who climb their rocks indoors to venture outdoors and claim their climbing there as well. Kilpatrick adds, “people can train hard indoors, then go outside and apply their training/techniques.”

“Crag clean-ups” on the mountainous coastline are also indicative of this ethic, according to Kilpatrick. He mentions that the gym has people who go out to places like Gibraltar and Lizard’s Mouth to clean up graffiti and keep the scenery the way it was intended to look. Santa Barbara Rock Gym’s mindfulness has spread from their small-scale location downtown to affect the community’s natural landscape.

As far as landscapes go, the gym contains both an outdoor arena and a business arena. Outdoor climbing adventures take place weekly that bring a handful of climbers, experienced and amateur, to local bouldering spots. Inside the gym, local smaller schools travel weekly through their doors for instruction and climbing, with introductory bouldering/climbing classes offered several times a week.

From tackling a wall of rocks under bright lights, to bouldering them beneath sunsets, Santa Barbara’s climbing community has flourished through the generations. Whether employed or training, the Santa Barbara Rock Gym instructors continue to create opportunities to participate in the sport. Such is the open and social climate of Santa Barbara Rock Gym.