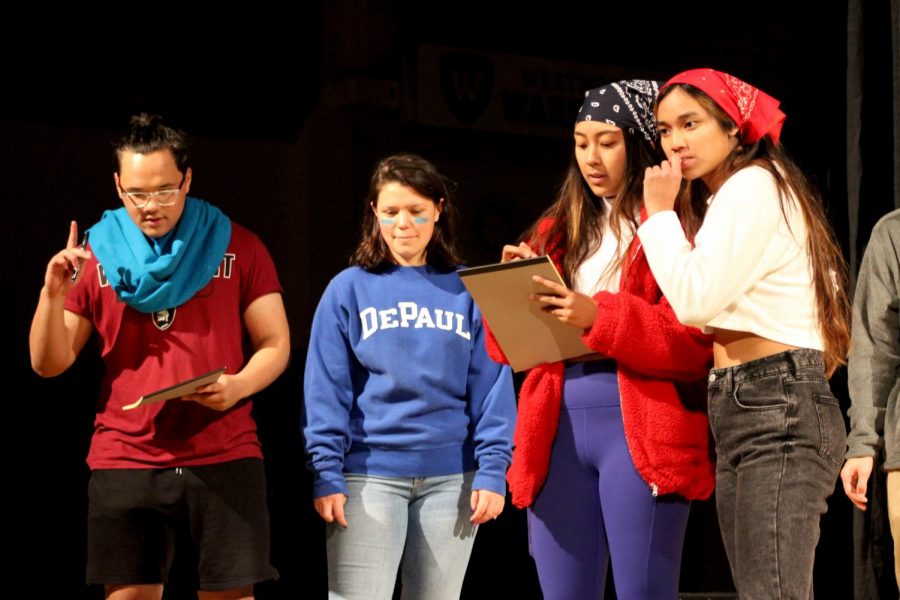 Last Wednesday, the Spring Sing Committee invited students to celebrate the beginning of the 2020 Spring Sing with its annual kickoff in the gym. Filled with dancing, games, and music, the kickoff pumped up the Westmont community for the seminal spring event.

The kickoff marks the start of Spring Sing, Westmont’s most highly-anticipated event.  Kiani Hildebrandt, this year’s producer, explained in a recent interview that the kick off is “the start of the season, the start of the race.” It is a chance to get everyone excited. “It’s used to spread what Spring Sing is,” shared Hildebrandt, “because a lot of first years don’t know what Spring is … we want to get them pumped, we want to get them excited.”

Within the gym, the committee kept students upbeat and energetic. Participants from the crowd competed in games such as “Song Identification,” “Bring Forward,” and “Dragon Ball Cheese,” trying to earn points for their respective dorms in time-crunching contests. Kickoff also included a performance from Nstep featuring Dee Kim, the Emerson Resident Director, as well as a song from Will Breman, a Westmont alum competing on this season of “The Voice.”

Amidst the games and artistic performances, somewhat controversial news was levied on the audience: Spring Sing will be moving locations this year from the Santa Barbara Bowl to the Arlington Theatre. Many students received this with confusion and disappointment, and the gym even echoed with a few boos. However, Hildebrandt explains that “The Santa Barbara Bowl is going into an eight-month construction period, and so the eight months is starting literally now; when March rolls around, it will still be six months to go.” The producer assures the student body that “we have a long tradition at the Bowl and great relationship with the Bowl, so if they could fit us in, they would.” Annie West, the assistant producer, confirms this news, citing mudslide damage as the cause of the construction.

Hildebrandt also hopes for a more “even playing field” at the Arlington: “Show order doesn’t matter as much, which is huge because of the lighting … everyone has a chance to win, compared with the Bowl, where lighting was off for the first three shows.” As far as restrictions concerning food or drinks within the theatre, Hildebrandt confirms that nothing is finalized yet.

At the end of the night, the committee revealed that the emcees this year will be Lizzy Green and Rebecca Boa, and that the theme will be “In Your Dreams.” Creative and versatile for both directors and designers, the theme can be taken in any direction shared the producer and assistant producer: “it can be whimsical, it can be dream-like, it can be sassy.”

The kickoff was a great night to announce the information for this year’s event. Students were able to spend a Wednesday evening fostering community, while, as West enthusiastically conveys, also getting “super excited about participating in Spring Sing.”