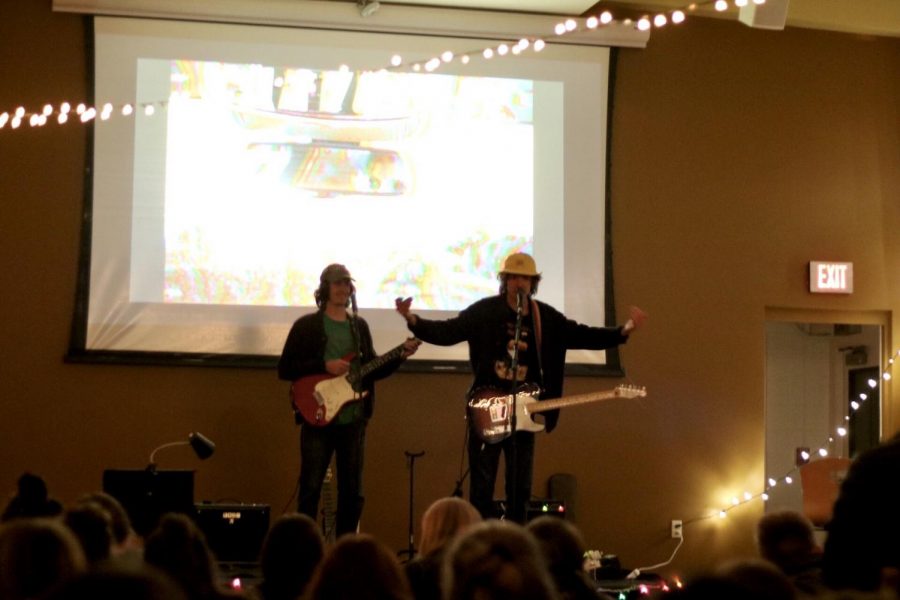 Carvollie, comprised of Dylan Nese and Zac Prince, perform for the crowd at Page.

In partnership with WCSA and Res Life, Page Hall hosted an event organized by Page Senator Tobi Oyebade the evening of Saturday, Feb. 23, in which student musicians performed original music.

The first group to take the stage was a duo known as “The Banana Conspiracy.” With Thaddeus Kowalik on electric guitar and Michael Oldach on acoustic guitar and vocals, the two musicians stood atop the stage behind a pyramid of bananas. After the first song, “Brainwashed,” Oldach announced the next in the set: “This song is for all you sleepless lovers!” Kowalik and Oldach then proceeded to perform their second of three songs, “Trapped in a Waking Dream.” Their third and final piece was titled “Good Times Rollin’.” Between songs, members of The Banana Conspiracy threw bananas from the pyramid into the raving crowd.

Next to take the stage was Zab Potter on guitar and Jada Fox on string bass. Potter’s conversational presence engaged the crowd as she and Fox emanated radiant energy, beginning by apologizing to the crowd: “I don’t have any-

thing to throw at you!” One of Potter’s original songs, titled “Viejito,” (“old person”) was inspired by her recent semester abroad in Mexico, where her host mother would endearingly use the phrase to refer to her husband. The next song was “The Feeling of Green,” prompted by the pollution in Thailand and Potter’s love for riding her bicycle. Her closing piece, “Lying on the Rooftop,” resonated most with the crowd. “It’s clearly not here [Westmont],” she chuckled as she introduced the song, “because that’s not allowed.”

Guitarist and vocalist Anders Heald (known by his stage name “Zenith”) followed as the only solo performer of the night. He sat tall, facing the crowd with his guitar. Introducing himself and bantering with the crowd, he claimed, “If you don’t know me already, you will” — resulting in responsive whoops from his fan club. His first piece centered around the concept of “not giving up,” whether in “faith,” “dreams,” or otherwise. The next song, titled “It’s All Grey,” is more mellow and contemplative. Writing it after a breakup, Heald centralized themes of heartbreak and confusion. “It’s about heartbreak …” he began, pondering how “…you just have to live with the heartbreak.” The most striking line of the piece arose in one of the verses: “Is anyone really happy on their own?” Heald finished with a song he calls “I Don’t Know,” appropriate for the phrase’s repetitive nature and the song’s youth (as it was composed only two days prior to the performance).

The final act of the night was another duo, Carvollie, consisting of guitarists and vocalists Dylan Nese and Zac Prince. Prepared to end the evening with a burst of energy, Nese and Prince pulled the crowd into the center, encouraging spectators to gather close around the small stage. They opened with an instrumental piece consisting of just two electric guitars before transitioning to a song called “Statue,” incorporating vocals. Their sound is a reincarnation of the dichotomous angst and somber of late ’90s rock, noted especially in another one of their songs, “Echo Chamber.” Throughout their set, they alternated between instrumental and vocal pieces.

At the end of the evening, third-year student Thaddeus Kowalik said that performing in front of his peers was “nerve-wracking, but exhilarating.” For many of the performers, it was their first time on stage. “It’s a piece of our heart that we’re sharing with Westmont that we don’t normally get to,” said Kowalik.