On Friday, Feb. 21, the Westmont women’s tennis team squared off against William Jessup on the first round of a two-day road trip. Westmont came into the match with a 2-5 record, and were very hungry to add another win to their win column.

The doubles portion of the matches consisted of partners Cade Pierson and Emily Peterson. Rachel Jackson and Christine Hemry competed in doubles as well. Both sets dominated, with the first group sweeping and the second group only giving up one set to the opponents.

The singles portion replicated this dominance and continued the winning streak. First was Ava Verchimak, who, after trading sets back and forth, came out victorious in the final set. Next up was Ana Negri, who was won both games and finalized Westmont’s win, fishing with a score of 7-0.

Next up, on Saturday, Feb. 22, the Warriors traveled to Fresno to play Fresno Pacifc (FPU). Westmont continued with the same doubles partners for this match, but both teams came up short against FPU.

Negri and Sidney Lowry also teamed up for the doubles portion, but did not come out with the win, despite putting up a great fight and playing extremely hard.

The singles portion consisted of Cade Pierson, Emily Peterson, Ana Negri, Sidney Lowry, Rachal Jackson, Christine Henry, and Ava Verchimak. Pierson and Henry were the only members to compete in a third set of their matches.

Pierson was trading points back and forth and continued to push on, but in the third set she fell with a score of 8-10. Henry also was resilient, but her efforts fell short with 2-6 in the third. Every other member lost the first two sets, which resulted in a Westmont defeat of 0-7.

While reflecting on the matches, Pierson said, “Everyone competed hard and represented our team well, as usual. This match and level of play was good preparation for the important conference matches that we have later this upcoming week. I’m really excited about what we’ve been working on and how we’ve been implementing it in matchplay and I’m excited to see it continue to come to fruition in our upcoming matches.”

Next up, the Warriors will face off against San Diego Christian on Feb. 28. The matches begin at 1 p.m. and will be held at Westmont. Come out and support your Warriors! 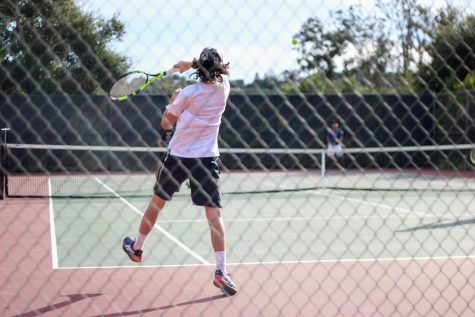