Basketball goes 1-1 against The Master’s

On Saturday, the men’s and women’s basketball teams traveled down to The Master’s University for another big rivalry game. The last contest ended with a buzzer beater from the Mustangs to clinch the win at home against the Warriors in the men’s game.

The men’s team came into the match looking for revenge at the Mustangs’ home court. The women’s team came in looking to hold onto their number one spot in conference, along with defeating the No. 2 Mustangs again.

The women’s team won by 12 points, with a score of 56-44. Performances by Iyree Jarett and Stefanie Berberabe kept the Warriors ahead throughout the game, both leading the team with 18 points of their own.

In preparing for the game, sophomore Jarett said, “We had a great game plan by our coaches and we were all really focused on executing them well.”

The Warriors’ roster size compared to the Mustangs’ is on the smaller side, but being undersized does not compare to the amount of heart the Warriors played with during the game.

Berberabe said, “Going into the game, we knew we had to be more physical and scrappier than them to win the game… we played with more heart and toughness.”

With that, playing at the post Kaitlyn Larson and Gabriella Stoll both helped to

stop the six-foot-six-inch Mustang Stephanie Soares from making plays, keeping her under 10 points.

Although it was a great road win for the women Warriors, they know it is not over

and they still have to beat at least one more GSAC team in order to clinch their No. 1 spot in conference.

Later on in the night, the men’s team went up against the Mustang men. Starting off strong in the first half, the Warriors came out with an 8-0 lead. The Mustangs stayed

trailing throughout the first half, but closed the gap by halftime, entering the second half down by two, 39-37.

The leading scorer of the match was Abram Carrasco with 28 points. Other leading scorers were Justin Bessard and Tristan Lloyd playing at the post, both with 11 points o 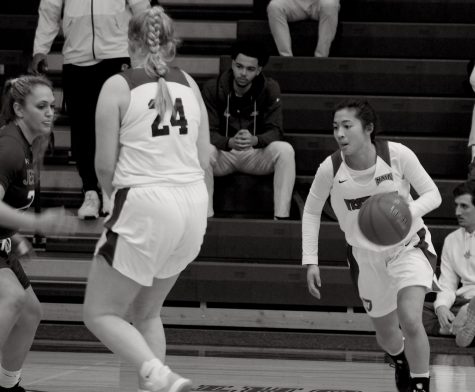 The entire second half was close scoring, and it wasn’t until the last minute of the game which determined who was going to win. With 38 seconds left on the clock, DJ Wilson hit a 3-pointer to give the Mustangs a three-point lead. Carrasco then got fouled shooting a 3-pointer and made two of three from the line to bring the Warriors within one.

In the last seconds, Warriors forced afoul and Soares made both his free throws to extend the Mustang lead, bringing the Warriors out of reach to win.

The Warriors are still in favor of holding down the No. 1 spot in conference, having to win at least one more game next week to be crowned number one in GSAC.

Both teams are looking forward to hosting another GSAC tournament in the near future and hoping to come out with a win against The Master’s University next time around.