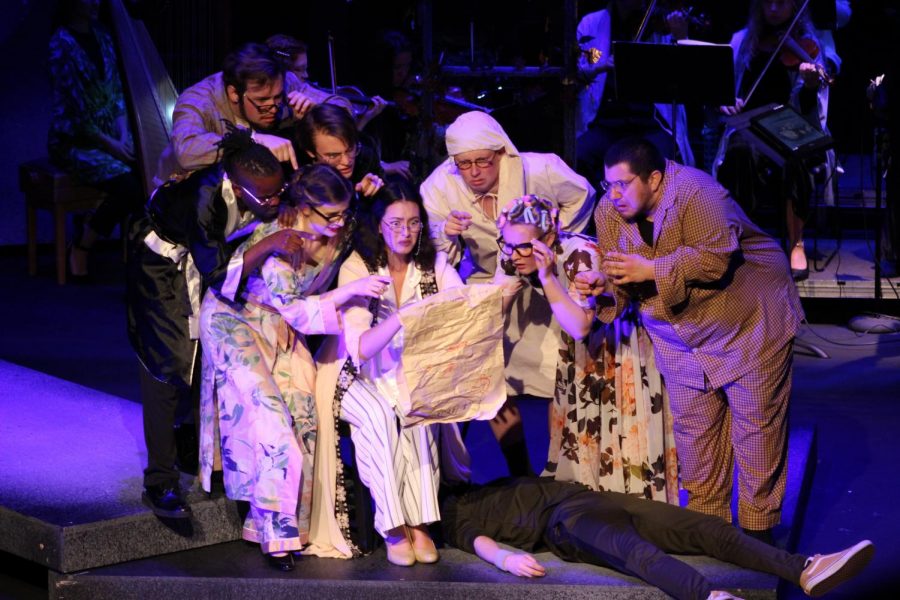 The curtain raised briskly to review a half-room coated in paper. Masked behind a screen, members of the Westmont Orchestra, directed by Dr. Michael Shasberger, filled the space with the resounding overture of Rossini’s “The Marriage Contract.” Dr. Shasberger described the challenges Rossini’s music poses: “The Rossini brings in the entirely new element for our singers of the ‘recitative’ or sung speech sections. It is a really important skill to develop, but a challenging one.”

Westmont junior Jessica Lingua featured as Fanny, the daughter of wealthy merchant Tobias Mill (Justin Sharp), who contracts Fanny to marry Slook (John Butler). However, Fanny’s heart belongs to Eduardo, played by Dylan Monacelli. While musically and narratively true to its operatic tradition, “The Marriage Contract” was not without its comedic relief and undercurrent for the New Vic’s audience. Adorned with a hockey stick, skis, and parka, the Canadian Slook surprised the audience by hacking through the wallpaper-coated doorway to claim the “good wife” he’d purchased.

The cast did not let the lighthearted presentation distract from the seriousness of the language concerning the contractual exchange and agreement to marry Fanny to Slook. Despite Slook sympathetically adopting Eduardo in order to transfer Fanny’s hand in marriage, Fanny made the final claim to her own agency. Following the jubilant finale celebrating Fanny’s ability to marry her one true love, the lights dimmed on Fanny as she kneeled beside a paper shredder rolled slowly across the stage and destroyed the final contract.

Before the intermission break, the cast addressed the language of the opera itself in its parallels to human trafficking locally and internationally. “If this struck a chord in any way, we invite you to stand with us,” Sam Stroming stated, and described the opportunity to donate to a local foundation in the lobby until “Gianni Schicchi.”

The curtain raised once again to reveal the walled room disassembled into platforms and pit orchestra dressed in bathrobes. The cast rearranged as well into a dreamlike setting, complete with playful new costumes and characters. Like any good drama, “Gianni Schicchi” begins with a dead body and greedy relatives. Wealthy patriarch Busso, played by Landon Moir, drops dead and is discovered by his family, who are distraught to find he’s given their inheritance to a monastery. Lawyer Gianni Schicchi (John Butler) is invited by the family to rearrange the contract, but writes himself in to inherit Busso’s property.

Dr. Shasberger describes the unique approach to utilizing the space and capacity of the cast: “John Blondell’s approach to the production is certainly not bound by classical expectations. I think that actors and audience appreciate his fresh approach to telling the stories and making them alive in a current context rather than trying to recreate a classical model. One thing we rarely change is the music itself. We have stayed almost entirely true to both Rossini and Puccini with just a few minor note changes.”