On Feb. 28, Westmont men’s and women’s tennis teams squared of against San Diego Christian (SDCC) in a highly anticipated matchup.

The women’s doubles teams consisted of three different teams, but were all unsuccessful in putting a W in the win column. All six members of the team participated in the

doubles portion, but were all defeated in the first set, which led into the singles portion of the match.

In the singles portion, Emily Peterson won her first set after trading points back and

forth, but unfortunately fell in the second after a hard-fought set. All of the other members

of the team were not able to pull out a win in their matches, but all sustained close games and put up a great fight. Westmont fell to SDCC, with a score of 4-0.

Next up was the men, and unfortunately they experienced the same fate as the

women. The doubles portion started of with Matthew Alleman and Zachary Prince, who

put up a hard fight but lost the first set. Next was Benjamin Saito and Sebastian Vethan,

who also lost in the first.

Finally, Ryan Chung and Trevor Stephens could not pull out a win but were keeping it very close the whole match. The singles portion was unsuccessful for the Warriors, but Abraham Pauta performed the best on the day, but he dropped the second. West-

Next up the women and men would meet Hope International (HIU) on Feb.29, and were very hungry to redeem their tough losses from the day prior.

The women’s doubles came out absolutely on fire. Partners Sidney Lowry and Ana

Negri performed very well and won their match with a score of six to two. Both of the other doubles partners were victorious as well.

For the singles portion, all six members were victorious in their matches and performed extremely well. Emily Peterson was a top performer, and after winning the first set, shut her opponent down in the second with a score of 6-0. The Westmont women came out on top with a score of 4-0.

The Westmont men unfortunately could not rally after the tough loss the day before.

In the doubles portion, Alleman and Prince were able to rally and push towards a win in their match, and Stephens and Chung snuck out a close win to push the matches into the singles portion.

All six members of the team came up short against HIU, except Sebastian Vethan, who

won his match after sweeping his opponent in both sets. The men fell to HIU, 2-4.

While reflecting on the matches, senior Cade Pierson said, “It was a great weekend of conference play for us. Our loss again at San Diego Christian was tough to take, but I

think we should all be proud of how we competed and how close it was. Although we lost and that’s rough, these type[s] of matches are the reason that we play college tennis.”

“In regards to our match against Hope it was another day of great tennis. This match

was a different pace than the day before, and we all did a good job of adjusting and taking care of business.”

Next up, the men’s and women’s tennis teams will compete with Indiana Wesleyan on March 5 at 10:00 a.m. in Arizona. 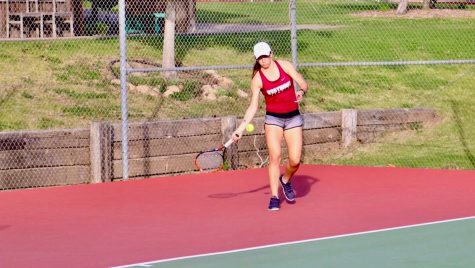