week, each earning a conference title and holding down their No. 1 seed in confer-

the start, the Warriors played fast and dominant, keeping a double-digit lead for a ma-

With the win against the Hawks, the majority of the team reached double digits in points. Sophomore Iyree Jarrett had a leading score of 18 points, with Stefanie Berberabe right behind with 17 points. Gabriella Stoll had 14 from the post and shooter Lauren Tsuneishi had 12 points. Lone senior, Maud Ranger, played a big role in grabbing boards as she tallied up 17 rebounds alongside her nine points. Ranger celebrated her senior night not only leading in rebounds, but

The women’s team remained consistent in their game as they travelled down to Hope International (HIU) on Saturday. At HIU, the Warriors won by 34 points with a score of 89-55. Helping out with the success of the game was Ranger, who reached her 10th double-double of

the season. She tallied up 18 points and 13 rebounds in the match. Alongside her, Jarrett led the team in scoring again, putting up 23 points.

On the other end, the men’s team went 1-1 this past week, defeating San Diego

Bessard led the team with 25 points and had nine rebounds, and right behind him

was Abram Carrasco with 22 points. Spaschak, a leader on the team, celebrated his senior night with nine assists.

On the road at HIU, the Warriors lost 87-96, making it their third GSAC loss. Leading scorer this match was Gyse Hulsebosch, with 23 points, who found success at the perimeter by shooting seven out of eight of his 3-pointers. Two freshmen who produced for the Warriors were Solomon Davis and Jared Brown. Davis earned his first collegiate start, rallying up a career high of 15 points, and Brown had 14 of his own.

Senior transfer Bessard mentioned, “Winning GSAC in my first year playing in it is crazy, but the whole year we knew we could get it done … just the first of our championship goals.”

for themselves this season. 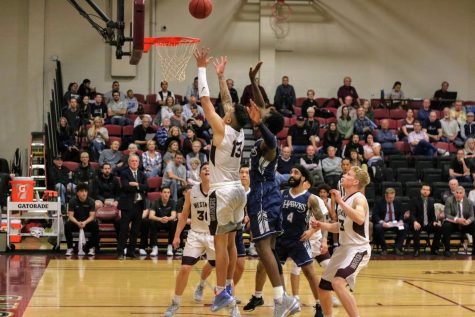