The Warriors hosted their first home match this past Monday and Tuesday. Overall, the team placed second out of eight teams. With a team score of 912, the Warriors were only seven points behind The Master’s won the tournament.

Embry-Riddle took third place with a final team score of 922. Lorne Fishburn had the best score of the three rounds at Westmont Invitational, which took place at the Sandpiper Golf Club. Though only a freshman from Corrales, New Mexico, Fishburn recorded a one-under-par 71 to have a fnal score of 222 strokes.

Fishburn tied for second with Eric Martin from The Master’s. Freshman Trevor White placed in fourth at the tournament with a total score of 224, only four points behind the leader. Senior Tanner Shean placed in 11th place with a score of 228.

Professor and head coach Tom Knecht says that he “couldn’t be more thrilled over the performance of the men’s team … As a first year-program, to take second place in a talented feld on a course of this difficulty says that they know how to compete. We finished with the best team score in both the first and third round.”

For the women’s team, Westmont finished last of the six teams at the tournament. “I’m

proud of how they have kept battling despite the adversity they have faced,” said Knecht.

score of 181 and placed 16th overall. Behind Bevill was Suzie Taylor who had a score of

“I’m really proud of the confidence the team came in with to the first day of the Sandpiper tournament, it seems like we had been building it for a while and everyone went out and played the best they could,” said Bevill.

tournament play. The mentality of tournaments is extremely hard to emulate, and we want to have as much experience as possible going into the GSAC tournament at the end of April.”

2-3 at the Sand Canyon Country Club while the women will continue their competition at the California Lutheran Regals Invitational on March 16-7 at the Sunset Hills Country Club. 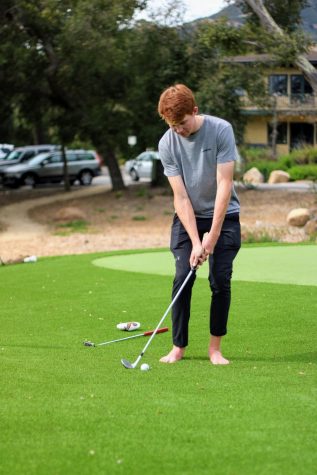