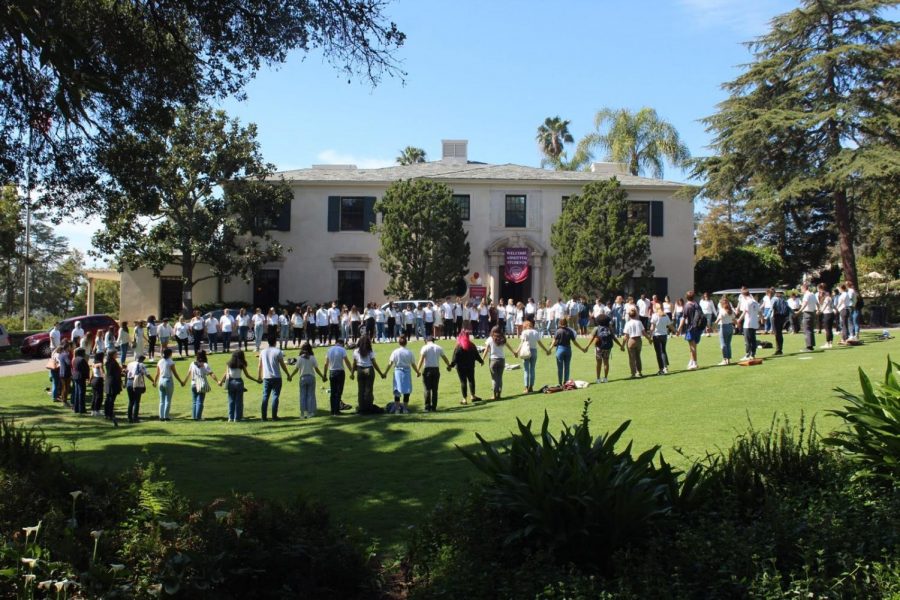 On March 6, more than 100 Westmont students and faculty demonstrated in solidarity with the students of color who have expressed how this institution has continually silenced them. Most (if not all) of those involved silently stood or sat outside of Murchison Gym during chapel as a unified group, the same location where the LGBTQ+ demonstration of about 52 students took place four years ago. Some had duct tape covering their mouths, most wearing the color white. Then the participants moved to demonstrate in front of Kerrwood, the building where the college was first established.

In the weeks leading up to the protest, spotlights were placed on the racial climate of Westmont, as established in the resurfaced 1968 Horizon article “Negro Life in a ‘White Cloud’” by Audrey Davis, and on the emails, events, and protests all on the subject of racial injustice, inequity, and silencing of students of color/people of color on campus, which were recorded on the Westmont White Jesus website (created last spring to focus on the stained-glass window discourse).

Due to the outbreak of COVID-19, most members of the Westmont community have been evacuated from campus. While most are not on campus, many are continuing to find spaces on platforms such as Zoom, Google Hangouts, and even The Horizon itself, to process and share their perspectives on the campus racial climate.

Below, various students have been asked to share their thoughts on campus climate, whether or not they took part in the demonstration or directly associate themselves with Intercultural Programs (ICP), and/or how COVID-19 may or may not impact these conversations about racial justice on campus. Here are some of their responses:

Soren Warren, a first-year student, expresses why he took part in the demonstration, stating, “I participated in the demonstration because I felt very moved as a result of the stuff that has been going around on campus. This whole semester actually has been a time in which my perspective has been broadened in a lot of ways, and I wanted to show support because I care about what other people are going through, even if it’s stuff that I don’t have much perception of.”

In an interview, Warren admitted that he was “not very immersed in the culture yet” nor associates himself with ICP, but that “as a white male, [he] understands how it feels to be defensive about perceiving these types of social change… [yet] hopes that [he] can talk to people and spread the word to motivate more people like himself to make [a] change.”

Likewise, David Schaupp, a first-year who identifies as Korean and white, says he can “sympathize with the white students who find it hard to grasp the tangibility of whiteness as an institution and the power associated with it.”

Schaupp adds, “However, simultaneously, I also feel the marginalization of people of color through ‘othering’ and alienation.” He participated in the demonstration because “it is an issue that is constantly overlooked by much of the campus and it is about time that it gets acknowledged as a real problem.” Schaupp is a member of the Multiethnic Student Association (MESA), one of the six organizations within ICP.

Fourth-year student Karis Park illustrates the purpose of the demonstration, stating, “The demonstration was a way to stand in solidarity and support with the students of color who have been victimized — hurt, made to feel silenced, felt betrayed or unsafe on campus as a result of everything that has happened — [within] the Westmont community. The fight for people of color’s voices to be heard is not just a battle that people of color are fighting on their own; it’s important to visually see support from fellow white students and faculty as well.”

Park mentions that as a sociology major, “[it’s] a huge privilege to be able to understand the pervasiveness of white hegemony on this campus. Some people don’t even have that language to understand or fully see it at work … it’s clear that there are people who are incredibly miseducated and misinformed.”

Though Park identifies as a third culture kid, a Korean student, and a missionary kid, she has not been involved with ICP in terms of attending meetings. However, she emphasizes that “one of the most important things about this demonstration was its solidarity and inclusivity … that in a fight that seems so divisive, this demonstration was a way of bringing people together.”

Tyler Lynch, a third-year student, started attending White Students for Racial Justice (WRJ) at the beginning of this school year. He shares his current thoughts on the evacuation and how it may impact the conversations on racial justice, stating, “With the promise of continuing the conversation after students [have] returned from spring break and the lack of follow-through after the evacuation, I think that Westmont is using it as a way to avoid the situation once again … I know that it’s hard for me to focus on what happened before [spring break] with all the stress of returning home and transitioning to a new form of class.”

As a member of the LGBTQ+ community, Lynch states that he knows “how it feels to be a minority on campus. I’ve heard from my friends, witnessed, and experienced what it’s like to be someone out of the focus of this campus … I’ve seen [students of color] be angered by feeling as if they’re no more than a statistic. I’ve seen them cry at the feeling of being silenced. I’ve seen them fear of their safety at Westmont after a few signs that we peacefully placed in protest were defaced with harsh intent. I couldn’t sit by any longer after watching the pain the people I love went through anymore.”

Emily Mata, former Latinx Student Union co-leader and fourth-year student, states: “In the end, regardless of any critiques I might have of the demonstration, it was an important moment for the Westmont community. I wanted to be part of this physical act of recognition of the struggles of people of color on campus. It was another step in ongoing efforts to force Westmont to reckon with its mistreatment of [people of color], and it was unique for the amount of public faculty support that it attracted.”

Though she understands that everyone who went “had a different reason for being there,” Mata  expresses her thoughts that the campus climate “is, and always has been, toxic.”

Mata shares her thoughts about the changing campus climate, describing how it’s come at the expense of so many individuals.

“It’s come because of countless individuals who have voluntarily devoted their time and energy to fight racism at Westmont,” Mata states. Yet the senior is also concerned for the reason for the demonstration. “It seems like we, as a community, spend more time on educating white people and congratulating them when they learn than we do on empowering students of color.”

Sam Stroming, a third-year student, echoes these concerns. “As a white female in a white majority … I don’t experience daily what it is like to be in the minority on campus. I have to actively choose to listen to and learn from friends of color on campus … to engage in the conversation myself,” she states.

“The demonstration expressed deep hurt and anger about Westmont’s pattern of racial silencing … to make the nonparticipa[ting] Westmont community come face-to-face with this pain instead of ignoring it or reasoning it away.” During the interview, Stroming mentions that she is not directly associated with ICP due to other commitments.

Fourth-year student Owen Carlson puts it this way, stating, “[The demonstration is] representing systemic flaws in our college that have made Westmont a safe place for white students, and a toxic place for people of color … [and] I realized I was playing a part in the racial culture of campus whether I knew it or not.”

However, whether or not an individual is a person of color or a white person, fourth-year student Caitlyn Wells says, “I hope and pray students, faculty, and staff continue to be courageous in speaking out and stepping up … [the] campus climate at Westmont aligns perfectly with campus climate at most private, predominately White evangelical college[s]. Westmont is not an anomaly, but it is the place where we have [the] agency to seek change.”

Currently, there are various events and conversations regarding campus climate. Mata encourages others to continuously engage with the campus racial climate, stating, “I’m still spending plenty of time having conversations with peers, working with faculty, and educating myself. I understand that organizing and learning look different when our community isn’t sharing physical space, but if people think that COVID-19 is keeping them from meaningfully engaging with conversations about racial justice, they’re wrong … there are countless ways to get educated or involved through the internet.”