From the gnostics to the Nazis, “Welcome to the World of Religion” covers a wide range of topics 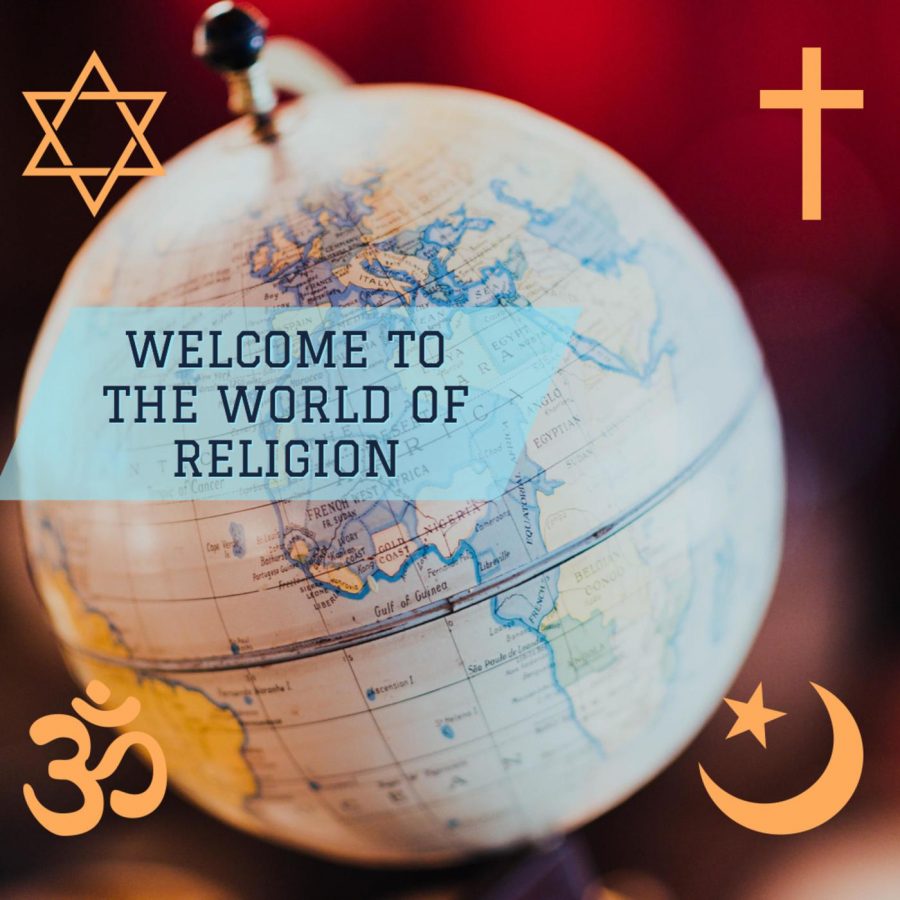 Horizon Arts and Entertainment writer Patrick Otte had a conversation with alumni Austin Nachbur and Nathan Tudor about their podcast: “Welcome to the World of Religion.” Otte decided to write another article on the alumni’s podcast due to their originality and passion about religions that they bring to the digitized world. The trio discuss obscure religious topics, but a satirical theme keeps boredom at bay. For theologians, historians, or people who want to learn not-so-well-known facts: keep reading!

Otte: “What’s been your most interesting, or strange podcast that you could keep talking on and on about?”

Tudor: “For me it’s probably salvation hacks, or religious symbols. The very first episode sparked the idea of it. It was basically us talking about the paths of salvation, and they’re not like cheating, but they’re a little easier, so we kind of just exaggerated it to a certain degree. So for example, in Roman Catholicism there’s examples of giving an indulgence. So we say just get rich, and buy an indulgence: salvation hacked.

Otte: “If you want to go to heaven, you just have to pay.”

Otte: “What are toll houses?”

Nachbur: “Toll houses, they are this weird thing that got referenced in the second century. We don’t like to talk about it anymore. It’s an aspect of Eastern Orthodox theology. I could say it’s Eastern Orthodox theology but it’s not. It’s a very obscure thing that was written in a couple of hymns during the second century. Most people don’t take it seriously. It’s about a description of the soul’s journey as you go through heaven. You go to these various toll houses in heaven that are guarded by Angels and Demons, and they will test you on each of your sins. This predates organized Manichaeism, it’s really old stuff.”

Tudor: “Austin, do you want to talk about Manichaeism?”

Nachbur: “Manichaeism was something that kept coming up tangentially in a variety of other podcast episodes. We talked about it in the Hinduism episode, and then it showed up in the Gnosticism episode. It can be considered as a gnostic cult in Christianity. But then it kept showing up in other religious topics of Hinduism, and then we realized that the majority of its references are in ancient Christian literature as a gnostic cult. It’s actually a multicultural religious movement that incorporates various aspects of Zoroastrianism, Christianity, Buddhism, Hinduism, and tribal religions of the east. It’s kind of its own huge deal. We knew so much about it, we ended up doing an episode on it.”

Otte: “Did Manichaeism start as a Christain cult, did they not want to be found out by the Spanish Inquisition?”

Nachbur: “No we are talking [about] Roman Christianity. A couple centuries. Like that old. It started out in the east, and then spread to the Mediterranean area with Christians. However, most references that we have about it are in Christian authors from the third through fifth centuries writing about how it’s wrong, a mis-appropriation of the Christian theology. But it’s not Christianity, it’s a blend of all these other religions that’s got so much going on with it. It mostly gets referenced as a break-away Christianity group, even though it’s something else that’s been adopted entirely.”

Tudor: “Our season finale had so much content that we had to make a two-part episode, and we’ve considered coming back to this as well. It was about ranking religious symbols, their history, their symbology, just how they look, their aesthetics.”

Tudor: “We did everything from the cross, to the Buddhist wheel of dharma. We even did the swastika. That one we had to treat a little specially.”

Otte: “Huh, how was the swastika used in different instances throughout history? Besides the Nazis of course.”

Nachbur: “It was a hugely important symbol in Hinduism. Pretty much up until it was co-opted by the Nazis. It was a symbol of luck and fortune. It has got more history besides the Third Reich. It was used for millennia beforehand. That’s why you’ll see swastikas everywhere in India, or Hindu temples.”

Tudor: “This also gives us a niche to respond to how religions shift over time, due to various happenings. You’ll never know when something serious will pop up when we are in the middle of discussing how epic the seike swords look.”

Otte, Tudor and Nachbur covered indulgences during Roman Catholicism, toll houses, Manichaeism and the Hindu history of the swastika. Listen to “Welcome to the World of Religion” podcast on Spotify, and if you enjoyed this conversation, expect more content in the future. “Welcome to the World of Religion” has season two “in the works,” expected to come out at the end of 2021.