“The Social Network” offered a stark warning, “The Social Dilemma” informs us that we did not listen 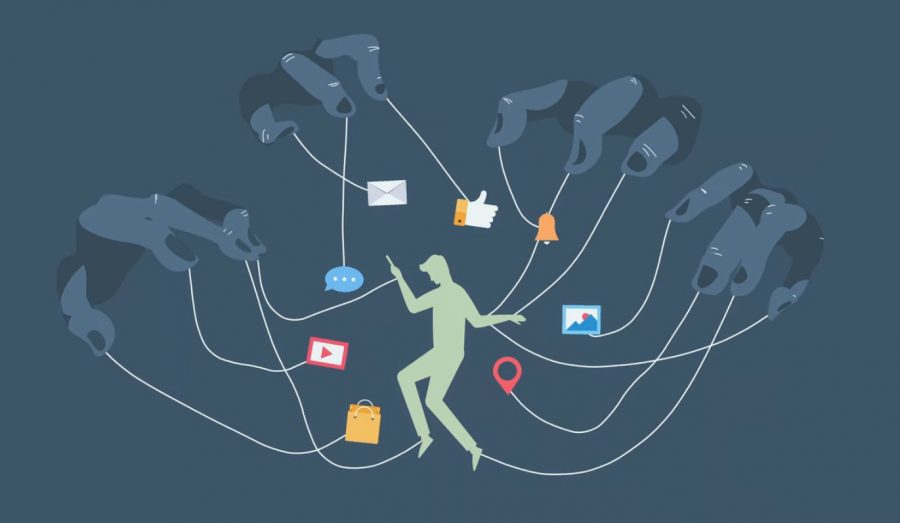 Scott Fitzgerald once said, “Show me a hero and I’ll write you a tragedy.” His sentiment still rings true today. Typically, films have heroes and villains, but the lines are often blurred when real-life stories are adapted for the big screen. 2010’s “The Social Network,” directed by David Fincher, and the newly released “The Social Dilemma,” a documentary directed by Jeff Orlowski, explore the meteoric rise of social media and the gaping crater it has left in society.

In “The Social Network,” Jesse Eisenberg plays a young Mark Zuckerberg in a tech-based drama illustrating the birth and rise of the Facebook Empire.

Fincher’s directorial style is frenetic and fast-paced, but what can’t be glossed over is the type of morality the film portrays. Zuckerberg’s social awkwardness and unwillingness to relate to most human emotions is laid bare for the audience as he often fails to notice his friends’ feelings, and serves as a foreshadowing of Facebook’s eventual mirroring of its creator’s traits.

This works largely in the film’s favor, since most of the characters Zuckerberg challenges for corporate dominance are morally defunct. The Winklevoss Twins, both played by Armie Hammer, are uptight, obnoxious, and don’t mince words when it comes to insisting on their way. The twins’ clashes with Zuckerberg work because their snobby swagger makes Zuckerberg something of a social underdog. The audience can cheer him on as he out-thinks two rich guys with nothing to lose, but with every victory Zuckerberg wins — from securing his own base of operations to spreading Facebook to multiple countries — a sense of dread grows.

Aaron Sorkin’s multilayered script makes it abundantly clear that a flawed man is trying to create a perfect system. Eisenberg frames his portrayal with a timid rage as he battles businessmen, wannabe billionaires and, ultimately, himself. While social media may change the world for the better, it cannot fix Zuckerberg’s — or, by extension, the human race’s — deep-seeded social and emotional troubles.

Jeff Orlowski’s “The Social Dilemma,” released in January of 2020, takes that idea one step further by arguing that social media is incapable of fixing anybody’s social or emotional troubles. Orlowski’s film presents social media as a force that worsens the very problems it promises to fix.

The documentary is at its best when it focuses on its interviews with Tristan Harris, the CEO of the Center for Humane Technology. Given Harris’ history as a design ethicist at Google, he is able to accurately chronicle how social media has exacerbated and thrived off of an age of social and political polarization. Other interviewees, like Harvard University professor Shoshanna Zuboff and virtual reality expert Jaron Lanier, add unique takes on the future of social media and how much control it has over its users. Orlowski’s documentary is a multifaceted take on how much social media cripples society.

Were that all “The Social Dilemma” had to offer, it would be a much stronger documentary, but Orlowski decides to cut between the real-life interviews and add a fictional short film about a family struggling with the dangers of social media. Skyler Gisondo and Kara Hayward play siblings with opposing views on technology, but the twists and turns in the story lack dramatic heft because the documentary always transitions back to real-world interviews and social media statistics. Those constantly remind the viewer that the story is fake, draining it of any tension. The tech-obsessed future that Orlowski’s real-life interviewees describe is tangible enough that a short film highlighting that reality proves unnecessary. “The Social Dilemma” shines when it focuses on the dangers of what’s real because, as Harris argues, social media has led to a decline in self-confidence and trust in public institutions.

“The Social Network” casts the rise of Facebook in a witty, frenetic light. The film’s speed enables it to make clear who stands for and against Zuckerberg’s triumphs, all while digging into what keeps him focused and what breaks his trust. “The Social Dilemma” doesn’t have such clarity. Its voices are in an hour and thirty-minute vacuum, arguing for humane social media practices against a void of endless posts, recommendations and already established social connections in the real world, but its questions are pivotal.

Just as Zuckerberg tried to better the world by connecting it, Orlowski now asks how the world itself can better connect.