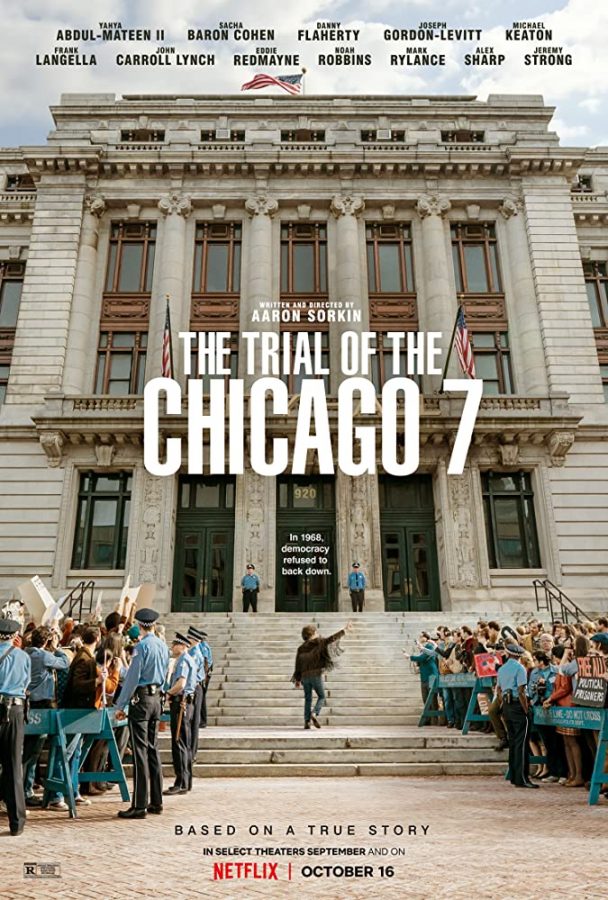 While the notorious riots during the 1968 Democratic convention in Chicago could lend themselves to a politically charged film, Aaron Sorkin’s “The Trial Of The Chicago 7” is a breathtaking achievement that fearlessly presents the historical trial’s facts in a non-partisan fashion, while utilizing a brilliant cast of complex anti-heroes and revolutionaries.

While many of the seven protagonists are political revolutionaries, their shared goal is to end the Vietnam War, independent of party politics. When speaking about the presidential elections of 1968, leader Tom Hayden, played by Eddie Redmayne, implies that his group’s interests are not tied nor associated with any political party, stating, “When it comes to social justice and the war, there is simply not enough difference between Humphrey and Nixon to make a difference.”

Several times throughout the film, one is tempted to vehemently dislike the federal justice system, but Sorkin’s film disallows and diffuses this potential hatred. In one argument between revolutionary radical Abbie Hoffman and Tom Hayden, Hayden brilliantly re-contextualizes Abbie’s hatred of the police, saying, “How many of their sons do you think are fighting in the war?” His statement suggests that, while the brutality shown by the police is immoral and unjust, the police still deserve some degree of empathy because the Vietnam War was causing them to suffer as well.

Sorkin brilliantly juxtaposes his protagonists to provide an in-depth aggregate persona of the anti-Vietnam, new-left movements during the 1960s. Sorkin does not sugarcoat the ’60s lifestyle or the unorthodox methods of Abbie Hoffman and Jerry Rubin but uses these elements in contrast to Tom Hayden and David Dellinger, who endeavor to make their anti-Vietnam revolution palatable to the public through a clean-shaven and professional appearance.

The film ignites a profound longing for justice as it breathtakingly depicts corruption in the American court system in the mid 20th century, but is especially pertinent to the recently heightened racial tensions in 2020. It contains elements from both modern political sides — suggesting a third political stance focused on both social reform and justice — alongside a fundamental respect for our governmental systems, even when occupied by corrupt politicians. Reflecting the emphases of the current political left, it is strongly anti-racist, anti-sexist, and at times healthily anti-establishment; however, it also mimics the values of the political right — a patriotic spirit and respect towards American veterans and military. By the end of Aaron Sorkin’s “The Trial Of The Chicago 7,” one is moved to value respect, empathy and justice, independent of political party.