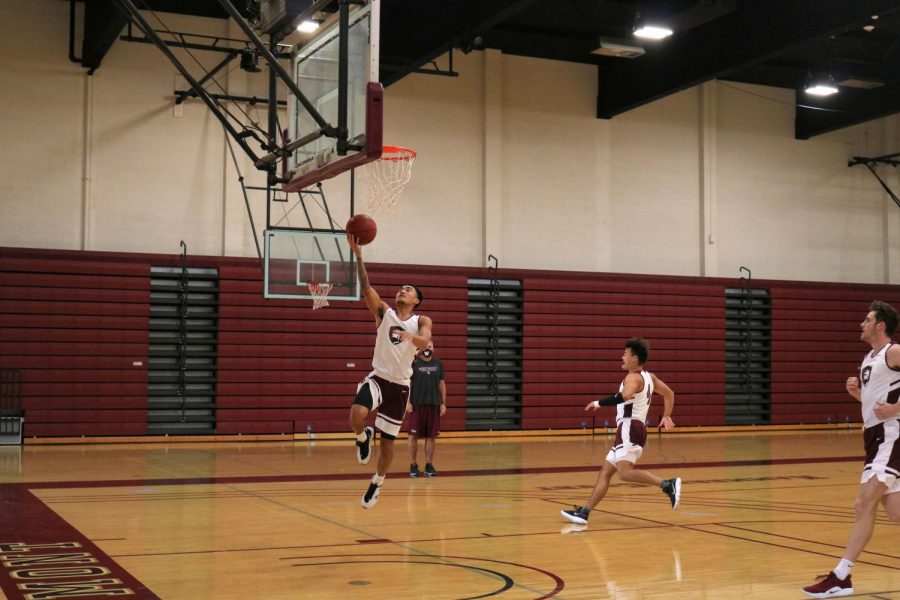 Jared Brown goes up for a layup.

Jared Brown, a sophomore guard for the men’s basketball team, summed up the battle against COVID-19 as this: “all we can do is control the controllable.”

The winter sports  season is within reach for Brown and his teammates, as well as for junior Iyree Jarrett and the women’s basketball team. However, a large question mark still hangs over their respective seasons.

“It’s no secret that sports are so dramatically different this year,” explained Jarrett.

She added, “There is a lot of uncertainty … whether we’re able to play one game, or all thirty, I’m excited to grow with this team on and off the court.”

Jarrett and seven of her teammates returned to practice following a bizarre end to last year’s season. After defeating Master’s University 76-67 to claim yet another Golden State Athletic Conference (GSAC) title, these Warriors were ranked number one going into the NAIA tournament. A few days later, the spread of COVID-19 forced the association to cancel the tournament.

Likewise, Brown and all of his teammates — except for senior Justin Bessard — are back on campus after their 26-5 season was sadly cut short. On top of that, Coach Landon Boucher succeeds newly retired coach John Moore.

Brown said, “Practices have been really fun under [Boucher].”

In regards to practice, Brown mentioned how much of a “blessing” it is to have Peter Park as their trainer. Park owns Platinum Fitness in Summerland, and they head over there three times a week to train. Brown gives credit to their time at Platinum Fitness for their improvement and the quality of their practices — as they started official practices just over two weeks ago.

In contrast, Jarrett and her squad have endured a different kind of practice. She described how practices consist of  socially distanced sprinting and lifting in small groups. Sanitizing is another addition to practice, as basketballs are wiped down constantly. Also, masks are worn during warm-ups.

“It’s sometimes a struggle,” admitted Jarrett, “but we’re just committed to being as safe as possible while playing the sport that we love.” Safety precautions will continue as they begin contact drills very soon.

However, even though practices are ramping up, is there even going to be a basketball season? The NAIA plans on proceeding with the winter season — a decision made as of a few weeks ago — but it is up to each respective school to make the final decision.

Whether or not there will be any games, Jarrett passionately expressed “We’re not going to let it stop us from working hard, growing as a team, and being the best that we’re capable of being.”

Referring back to “control the controllable,” Brown emphasized, “What we like to call ‘empty the tank’ because … we know our season is not guaranteed, so all we can do right now is continue to work hard and push each other to be the best version of ourselves every day as teammates and as brothers.”