A day in the life of a Westmont athlete: Meet Kat Bevil

This week’s athlete is Kat Bevil, a returner to Westmont’s women’s golf team. Bevil is a second-year student who has taken the role of team captain since her freshman year. Leading the women’s team by strokes and best overall scores, Bevil also led the Warriors in their first win during their very first golf season last year. This student athlete gives us insight into what her day looks like as a Westmont golfer.

According to Bevil, she wakes up every day at eight in the morning to make breakfast in the dorms before heading to class. Bevil adds that her favorite go-to breakfast is an egg, bacon, cheese and tater-tot burrito to get her day started.

Bevil explains that, because she takes two classes per day, her schedule is relatively busy. With different courses taking up most of her day, she spends a decent amount of time on her workload. After finishing her homework assignments, Bevil takes a walk down to the Stan Anderson Facility to practice. 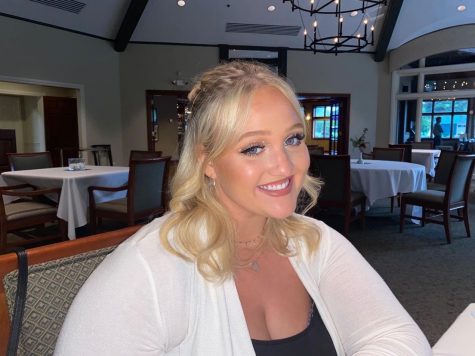 The Stan Anderson Facility, also known as “The Stan,” is the multi-million-dollar golf complex on campus near the lower-campus dorms and the tennis courts. Bevil goes to “The Stan” to practice putting, chipping, wood and iron hitting before heading to Glen Annie Golf Club.

Bevil continues her practice at Glen Annie by playing holes on the course with the team.

Bevil states, “After playing as many holes as we can before the sun sets, we normally like to go together to get dinner at the DC.”

One of Bevil’s favorite dinners at the DC is tacos.

With such a busy and routine schedule, there are a few things that Bevil looks forward to everyday. Bevil says, “I definitely look forward to winding down … with some music and just chilling in my room and chatting with my roommate. We both like to just debrief our days and talk about other plans for the week.”

Being back on campus and participating in team sports are a couple of things Westmont students weren’t sure about just a couple of months ago, but Bevil is happy to have both of those opportunities.

Bevil states, “I missed the community that I had last year, and being back at school and picking up with golf has made things seem ever-so-slightly more normal. I was sad our season last year was cut short, but now I am super excited and optimistic about the coming spring season!”