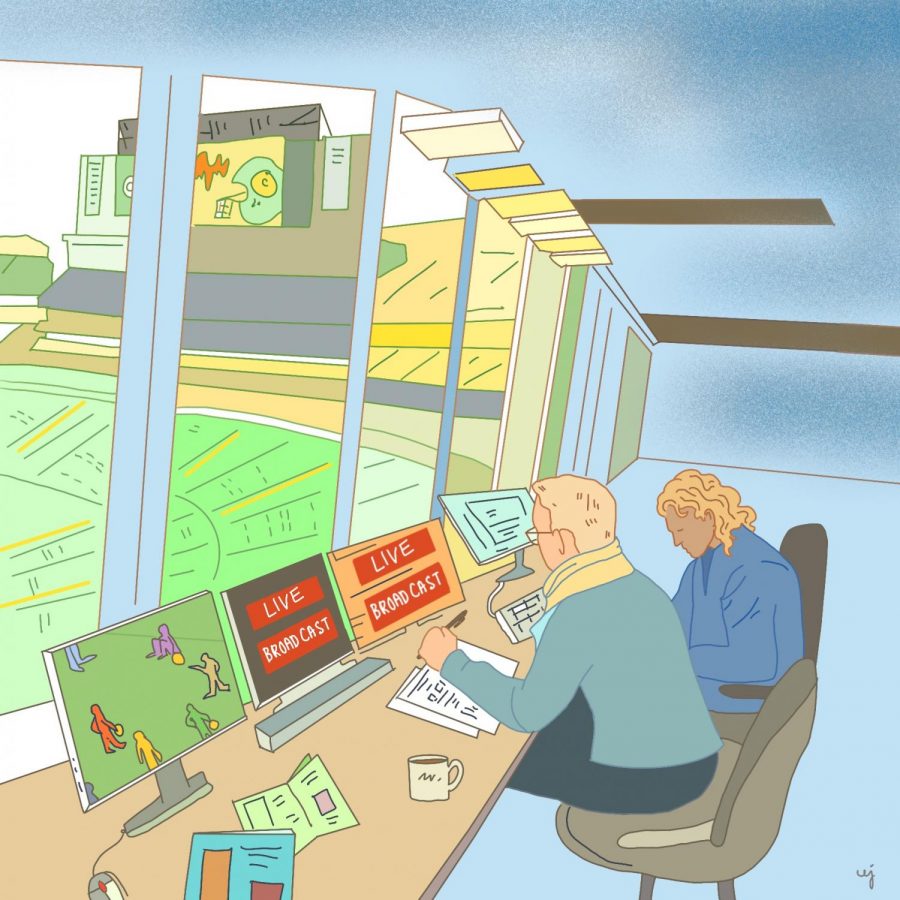 This fall semester has seen very few games, meets or matches of any kind. When spring semester rolls around, teams will return to competition with a twist: no fans. Livestreaming is an option, but this means that, Westmont’s broadcasters, the team behind the scenes, will take on even more responsibility in communicating to fans.

Westmont supporters will no doubt scurry to their laptops to watch or listen to any game, so it would appear that the broadcasters have more pressure.

Broadcaster Jordan Gunderson said, “I do feel slightly more pressured to deliver good content … it’s something that will stay in the back of my mind.”

Fellow broadcaster Brady Renck thought otherwise, “I don’t think there’s more pressure … [it’s] so exciting to know that there is a bigger audience on the other end.” Sports information director Ron Smith agreed, “I’m confident that more people will be watching [from home]. It’s the only way people can watch. Will that cause more pressure on our broadcasters? I don’t think it should affect them.”

Smith shared a couple changes the broadcasting team will have to make due to COVID-19. “Broadcasters themselves won’t have to make any fundamental changes to how they call a game.” However, when calling a basketball game, the broadcasters will be at the top of the bleachers instead of courtside. That’s following the COVID-19 safety protocol. Additionally, there will be no pre- or post-game interviews. Smith said, “[The interviews] are not going to return yet … we’re trying to stay as safe as possible.” Aside from those changes due to safety concerns, the only other difference will be how broadcasters will fare without fans.

Normally, broadcasters feed off of the spectators’ excitement and from the intensity of the game. When asked about the lack of attendees, Gunderson replied, “I will need to find more talking points and do more research before a game if there aren’t any fans.” Gunderson also noted the peculiarity of his voice being the only thing the audience hears. Usually, livestreamers pick up the noise of the crowd. Renck equated this to feeling like a scrimmage. He said, “Fans provide energy for the broadcasters.”

Both Renck and Gunderson touched on their anticipation for the return of sports. “The spring will be jam-packed with sports, which is always a blessing but can be hectic,” answered Renck. Gunderson commented on how weird it was not calling any games this semester, but recognized that he will “be more appreciative of the opportunities” when spring rolls around.

In the end, Smith and his team are dedicated to keeping everyone safe and bringing the experience of sports to viewers at home. “It’s disappointing with no games right now, and there aren’t that many broadcasters either.” Smith later added, “Next semester, we look forward to having more games and more broadcasters covering each one.”