Day in the life of a Westmont athlete: Meet Sidney Lowry

To start the academic day strong, Lowry begins her morning with studying and homework. Lowry starts early so she can get extra work done before going to her morning physiology class. Her schedule this semester forces her to make every minute count.

“I start class in the mornings and go up until practice time,” says Lowry. Her practices take up most of her afternoon.

“Practice honestly looks pretty similar to what it was last year, besides wearing masks before we actually start playing and getting our symptoms and temperatures checked every time before practice starts,” said Lowry.

Normally, the tennis season consists of more tournaments, as well as more teammate interaction, but both have been cut short due to COVID-19.

“[COVID-19] has made practice seem pointless in the sense that it’s like, what are we even practicing for? I’m excited to have [the rest of the team] back.”

Soon after practice, Lowry continues her academic pursuits in her night classes, which go late into the night. 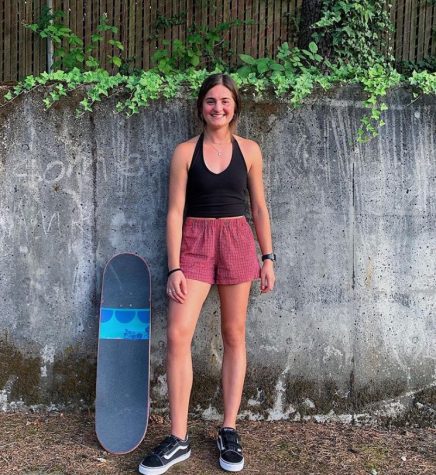 “The balance between sports and school and social life is complicated, honestly, because it’s sometimes hard to carve out time to study and do homework while also sleeping enough and having time to spend time with friends.”

Despite all of the time-consuming activities Lowry participates in, she often finds herself at the top of Gibraltar looking at the beautiful coastline of Santa Barbara to relax. She also uses whatever free time she has to hang out with friends and watch movies. Lowry applies her athletic abilities to beach volleyball as a form of decompression from her busy days.

Despite the busyness, her efforts are not in vain, as she has had multiple achievements in her tennis career. During her freshman season, she had an overall 16-4 single record as well as a 16-2 in number six singles. On top of that, Lowry had a perfect 10-0 during GSAC play.

To follow up her first season, Lowry made sure to bring her all and ended last year’s season ranking 10th in singles in the final Oracle/ITA NAIA Women’s West Region Rankings. She was able to go up to the second round in singles and the quarterfinals in doubles of the ITA NAIA Regionals.

Balancing a demanding major and athletic responsibilities is a challenge, but Lowry has risen above the challenges. Lowry is hopeful for this upcoming spring semester and excited for things to become normal.

“There is always this sense of uncertainty with classes, staying here at school, and if we will actually get a season to play.”

Hopefully soon, Lowry can show off her tennis skills on the courts once again.