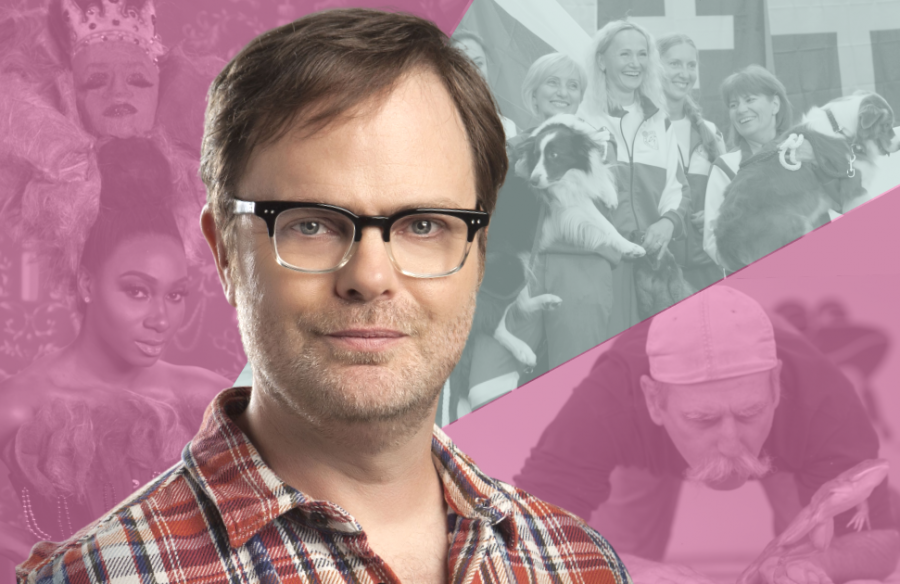 Primary narrator Rainn Wilson and writer Matthew-Lee Erlbach collaborated on Netflix’s new show “We Are The Champions,” released on Nov. 17. “We Are The Champions” covers a series of unique competitions, from cheese rolling, to dog dancing, to fantasy hairstyling. Reminding watchers of Rainn Wilson’s clever, Dungeons-and-Dragons-saturated, Type-A character from “The Office,” Dwight Schrute, Wilson’s words carry a grandiose, epic tone, betraying the archetypal nature of a gritty competitive arena or battleground.

The series is light-hearted, clever, informative and engrossing, and its stories of odd competitions are entertainingly told by Wilson’s odd and remarkably eloquent character. Erlbach’s writing and Wilson’s narration of the games exhibit an appreciation for honest competition, storytelling, and other cultures and backgrounds, while being entirely drenched in a modest and good-hearted hyperbolic humor.

While introducing “Frog Jumping,” Wilson describes the jumping potential of “the great American bullfrog” with poetic, waxing medieval verbiage: “In their quest for jump perfection, a few elite bullfrogs have found an even more powerful teacher than nature, the great American frog jockey.” While humorous, the hyperbolic, absurdly dramatic eloquence of Erlbach’s writing and Wilson’s delivery avoid the purposeful, potentially obnoxious irreverence of popular comedic works like “Borat” or “Trailer Park Boys.”

The music and filming techniques follow Wilson and Erlbach’s refined and dignified style. During the introduction of “Chili Eating,” the camera pans to a scientist extracting the spice from a chili to measure its spice in Scoville Heat Units, while an opera plays in the background and Wilson’s curious narration begins, “How do you measure pain?”

Those featured in the show appear as if they were characters selected from a book. For instance, in the episode entitled “Chili Eating,” participant Dustin Johnson holds the intimidating nickname the “Atomik Menace” after eating 122 of the world’s hottest chili in under 10 minutes. His “chili titan” competitors include Johnny Scoville, aka “The Savage,” “Bella,” “Chili Sid,” and “The Chili Queen.” The breeder behind the hottest peppers in the world, dubbed “Smokin Ed,” is eloquently described by Wilson as “the Willy Wonka of peppers” who “has built a chili breeding empire by obsessively breeding the hottest peppers on the planet.” Ed’s associates later call him “a mad scientist,” whose work is like the “‘Breaking Bad’ of chilis.”

Erlbach and Wilson’s storytelling subtly persuades the viewer, beginning an episode like “Cheese Rolling,” with the clear intent of making the audience laugh at the absurdity of such a seemingly rewardless sport, but slowly helps the viewer grow to understand why the featured characters participate in such events. Seventeen-year-old Kacie Anderson, for instance, runs the treacherous Cheese Roll race to carry on her family name after her uncle retired as the reigning Cheese Roll champion.

In “Chili Eating,” Heather Peter’s shocking spice tolerance is fueled by a self-control she cultivated while overcoming a number of substance dependencies. Brianna Skinner channels the hatred and marginalization she received for her transgender switch to conquer the pain of world-record-breaking chilis. The “bad boy of spin,” Keiran Cooper, began his successful yo-yo profession because his allergies to dust and grass made it impossible for him to play sports competitively. The stories featured in many of the episodes surprise watchers with a sense of inspiration and empathy and an understanding of the true background of such intriguing feats.

Rainn Wilson and Matthew-Lee Erlbach string each episode of “We Are The Champions” with a coherent narrative, wherein watchers learn to care about the protagonists and their adversities. At times, the show is so absurd, it is easily in danger of being mis-watched as a spoof documentary like Netflix’s “Documentary Now” series. However, Erlbach and Wilson allow certain moments to be too serious, too human to be scoffed at or considered comedic.

This oscillation between serious and hilarious moments makes the show so ultimately endearing. It is inspiring to watch these small towns and communities continue their traditions with fearless pride and zeal. “We Are The Champions” implores watchers to appreciate and lean into pursuits intrinsically valuable to them and their community and to enjoy these endeavors, no matter how odd, how unique, or how absurd.