With famous series such as George Lucas’ “Star Wars” and Frank Herbert’s “Dune,“ the genre of science fiction contains some of the most complex universes in both film and literature. Though works of science fiction are often defined by their meticulously invented worlds of science and technology, the greatest stories to arise from this genre are those that get to the heart of humanity by reaching beyond the stars. Senior Craig Odenwald does just this in his recently finished space novel that asks the question: Does your moral code hold up on the other side of the universe? 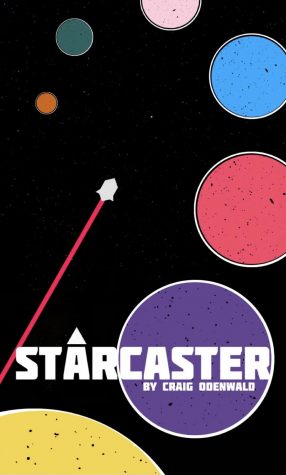 This year, Odenwald looks to publish his full-length science fiction novel, titled “Starcaster,” as the first of a planned trilogy. The book follows Titus, one of the last humans on Earth, on a star-spanning journey to find out what has become of the rest of humanity. Because Earth has been overrun by settlers from other worlds, Titus finds himself isolated from the alien societies that have taken root on his home planet. Accompanied by Felix, a wandering alien assassin, Titus, soon known as “The Starcaster,”  takes to the stars in search of his people and, ultimately, his purpose. Written in third-person dual perspective, each chapter’s point of view alternates between the two characters, though Titus remains the main character of the narrative.

Though “Starcaster” is his first work to move to the publication stage, Odenwald has been creating fantastical stories since a very young age. He reminisces on how, at around age seven, he would ask his parents to tell him stories on their family road trips. “They would start telling me stories, and after a year of that, they ran out of stories. So they said, ‘Why don’t you try telling a story?’ So I started practicing and my parents kind of went, ‘Wow, these go on for a long time, he’s got a lot going on up there.’”

When he learned to type a few years later, he began writing down little pieces, further fueling his passion for storytelling. In high school, he raised his ambitions to more substantial creations. Along with writing short stories, he completed a fantasy novella — “Search for the Sun King” — as well as two superhero novels, “The Alpha Project: Genesis” and “The Alpha Project: Meta Nation.”

Since being at Westmont, Odenwald has found a variety of ways to practice his craft. He applies his writing skills and experience by mentoring students through the Writers’ Corner, as well as writing for The Horizon’s Arts and Entertainment section.

After taking a year off from the project, Odenwald resumed work on “Starcaster” during his sophomore year as an independent study with Dr. Paul Willis. In addition to advising Odenwald in his writing process, Dr. Willis provided him with an array of science fiction and fantasy literature. “Part of the way the study worked was as I would write, he would send me books to read, and so I read through “His Dark Materials” trilogy [by Phillip Pullman] and I read through “The Space Trilogy” [by C.S. Lewis] …”

As one with a background in poetry, Odenwald was wary of getting caught up in the technicalities of the “Starcaster” universe, as many science fiction writers tend to do. Instead, he sought to use elegant language to describe the beauty of the galaxies Titus and Felix explore. Odenwald admits that he took inspiration from the likes of Lewis and Tolkien, saying, “What I tried to do was look at a lot of what C.S. Lewis did with Narnia and a lot of what Tolkien did with Middle Earth, and take that idea of the story sounding like it’s part of mythology and sort of bring that into a science fiction world. It’s cosmic folklore.”

Such fantastical elements are certainly present within the “Starcaster” narrative. The antagonists, a rogue alien faction called the Basilisk, act as the overarching threat in the story and represent the flaws within each of us. The Basilisk are “grown” rather than birthed and function in a sort of caste system, with the lower members of society, called “Hounds”, forming a cruel, emotionless fighting force.

Though these “Hounds” are lethal killing machines, they lack the ability to speak. In contrast, the more powerful among the Basilisk, the “Hunters,” are masters of strategy and war … yet their bones are more fragile than glass. Though the Basilisk are formidable enemies, Titus also must come face-to-face with his own kind. 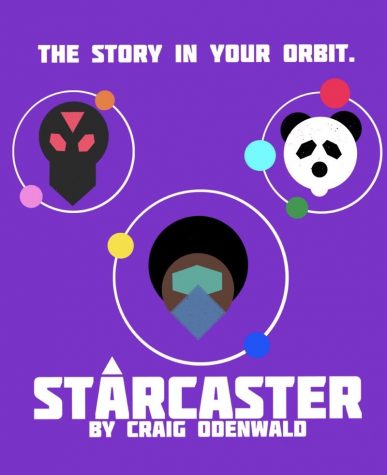 “Part of the conflict, as the story goes on, is when Titus does find some smaller groups of humans out there, their morals might not align with his because he grew up in a world with all these beings from different worlds and the humans have been in their own area doing their own thing, forming new beliefs for a long time. Titus’s reappearance could shift their trajectory as a species. It’s a clash of how to thrive vs. how to simply survive.” Having grown up on an earth that no longer suited humankind, Titus is an outcast on his own planet. In his search for belonging, he discovers that his place in the world may not be what he expected.

In speaking on what makes a good story, Odenwald emphasizes the importance of “leaving the audience encouraged. Because there are a lot of stories that can leave us feeling the weight of the world … So I think stories that provide an answer as to what to do with that weight are good stories. The main characters need to be different people by the end of the book because you’re going to be a different person by the time you reach the end of a book.”

Odenwald is looking to publish “Starcaster” in the near future, either through a publishing house or science fiction magazine in monthly excerpts. “If I don’t get published, that’s OK. I love telling stories, so I’ve got to keep practicing the craft.”