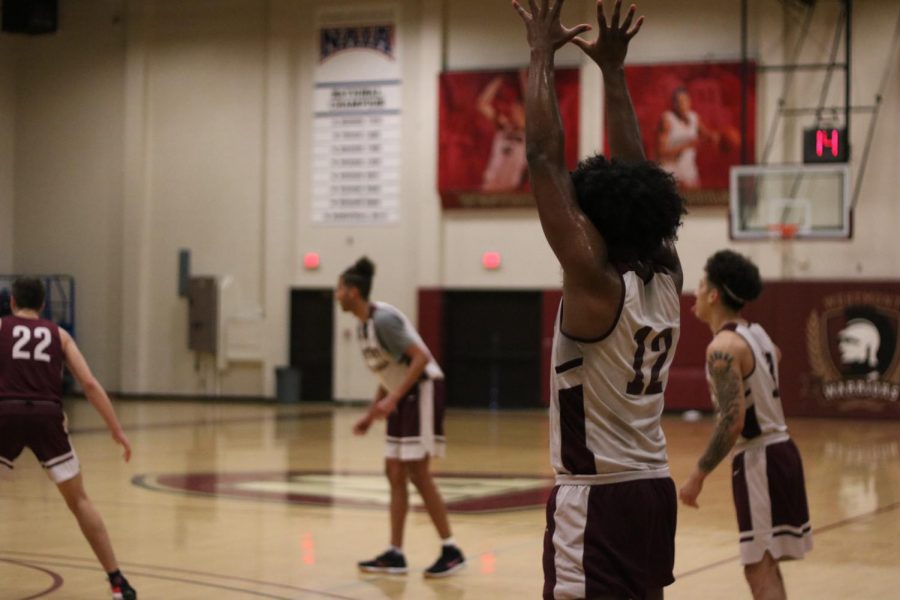 Noah Fernando asks for the ball.

On Tuesday night, Westmont’s men’s basketball team hosted their first game of 2021 against the University of Saint Katherine. Despite the home team’s recent COVID-19 outbreak from a game played in late December, the team and staff have recovered and are ready to get back to work on the court.

Saint Katherine got away with the win 86-81, leaving them undefeated with a record of 2-0. The Westmont Warriors continue to shake off their rust as they focus on regaining their strength and getting back into practice after the unfortunate outbreak, in hopes of turning around their 0-2 record.

Senior forward Ajay Singh led the Warriors with an impressive 25 points, as senior point guard Abram Carrasco and sophomore Jared Brown did their part by chipping in with 14 points each.

When asked about some of the difficulties the team has faced while playing in a pandemic, lead-scorer Singh replied, “Our team has very limited time to make adjustments because it’s hard to get games on the schedule. We also don’t have as many games as we used to and I felt like, this being our first game back in a month, we were rusty and it showed.”

However, the Warriors were able to collect some good stats. Senior Carrasco led the team in rebounds, collecting 11 points as junior Cade Roth did his part by hitting three three-pointers, proving to be a threat on offense. Despite the effort showcased by the Warriors, Saint Katherine came out on top, scoring 10 points off of Westmont turnovers, scoring 38 points in the paint.

Speaking on some of the Warriors’ weaknesses, Singh claimed, “Our offense isn’t the issue: I feel like our defense wasn’t great.” Singh remained confident, though, saying that “everyone on our team can get a bucket at any time [but] we have to play well on defense to win games.”

Saint Katherine held their largest lead of 16 points during the second half, before the Warriors chipped away at their lead. The Saint Katherine men outperformed the Warriors, because they shot 93.3% from the free-throw line and 38.5% from beyond the arc, resulting in a total of 49.2% in field goals.

As the Warriors continue to acclimate to the new roadblocks in their season, players and fans seem optimistic about future games. Their Golden State Athletic Conference (GSAC) games against Hope International University that were set for next week have been postponed, so their next scheduled game will be held on Feb. 16 against Vanguard University.

Through the uncertainty of cancelled and postponed games, the Warriors are working to stay prepared for whatever comes their way.