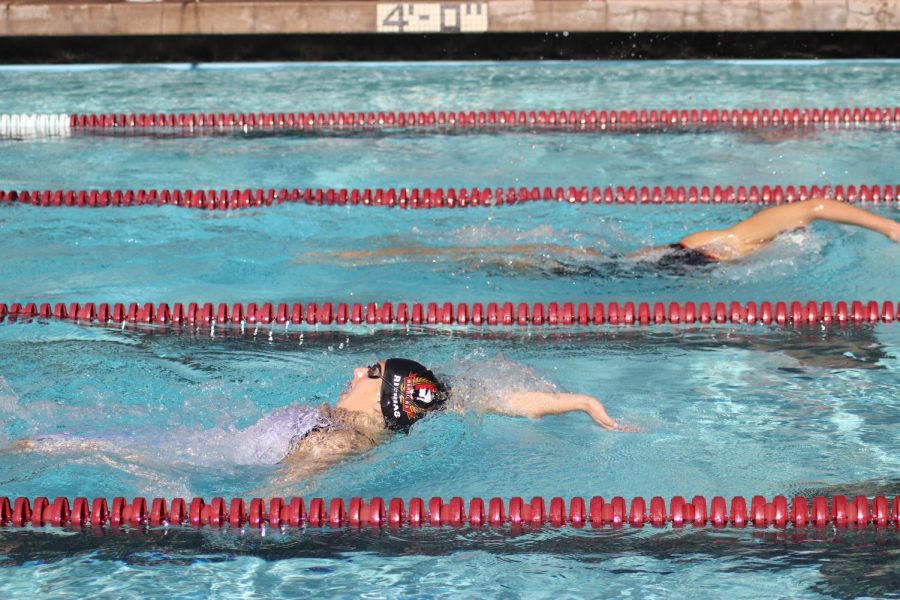 The Warriors back stroke with determination.

During the month of January, the Westmont swim team trained hard to compete in various meets. With many athletes in quarantine because of COVID-19 cases on campus, this meet was a long time coming.

Due to COVID-19 protocols, the previous meets were virtual, meaning that each team competed at their own facility and then compared the times online to determine a winner. Although not ideal, it allowed the teams to have a season.

Over the weekend, the Westmont swim team hosted an in-person tri-meet against Biola University and Simpson University.

Unfortunately, because of contact-tracing and Westmont’s quarantine protocol, some players were not able to compete in the meet. This was a major setback for the team and resulted in many adjustments.

First-year Cayla Won discussed how being in quarantine was disappointing yet helpful in many ways.

“A potential COVID-19 exposure actually prevented me from swimming at the meet. I was looking forward to it.” She continued, “Regardless, I think being quarantined actually refreshed me mentally and physically to come back and train for the next meet in two weeks.”

There were many social distancing protocols in place to keep both teams safe and free of the virus. In addition to no spectators at the meet, the athletes had to separate themselves in the pool lanes.

First-year Emma Washam commented on the atmosphere at the meet.

“It was great seeing others there,” Washam said, “but it is interesting being unable to interact with the other teams.”

With all of this in mind, the Warriors performed very well, as multiple athletes on the team set personal records and season-best times. First-year Rachel Peden placed second and sophomore Rian Lewandowski placed fourth in the 100-yard backstroke. Sophomore Kassy Gregory placed third in the 200-yard freestyle and sophomore Morgan Bienias placed second in the 1650-yard freestyle. All of these finishes really proved Westmont’s resilience especially because they were missing half of their team.

“Being able to finally race against other teams was the best thing that has happened this season because it really got me and everyone to get up and try their hardest to go fast,” said Peden.

With the many ups and downs due to COVID-19, the Westmont swim team has prevailed, managing to fiercely compete in all of their meets.

Westmont Swim is scheduled to compete in Malibu, California, on Feb. 12 against Pepperdine University.