The coronavirus pandemic should not be compared to World War II. Like, ever.

Let's reevaluate our choice of words. 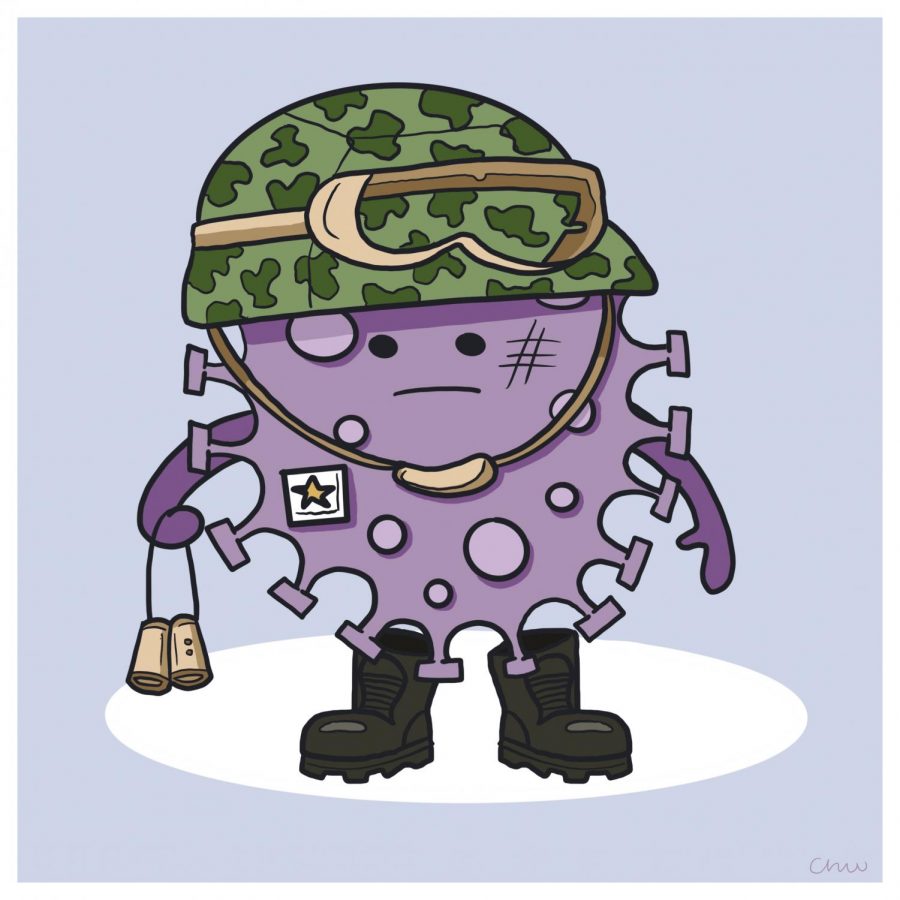 World War II and the current pandemic are in two completely different spheres.

Words are the tools by which humans shape their world. They function as descriptors that illustrate and communicate experiences as well as informers that shape the way our brains process new information. In fact, our brains take the descriptive words we think and say and use them to build filters through which we perceive the world. In effect, our experience is both mediated and shaped by the words we use. As such, we can’t afford to mess around with the way we use them.

COVID-19 is a nightmare for those who preach the conscientious use of language. I have never experienced such a misuse of the power of words as in the time we live now. I am unable to address the entirety of the problem, so I will spend the duration of this piece examining the detriments of comparing the coronavirus pandemic to World War II.

I have seen this comparison made in the news, in the Inaugural Address of President Biden, and by Westmont professors. I contend that, not only is this fallacious reasoning, it is an exceedingly irresponsible use of language in a time when judicious word choice is more important than ever.

My first claim is that comparing COVID-19 to World War II falls victim to the fallacy of false equivalency. Colloquially, this is known as comparing apples to oranges. The circumstances and impacts of World War II are so monumentally different from the pandemic that to compare the two constitutes a logical fallacy.

Let’s begin with disparities in deaths. Please note that this piece does not aim to minimize any loss of life, but rather to show that comparing two unlike things is a harmful societal practice. According to the CDC, 451,777 people have died from COVID-19 in the U.S. to date. 362,493 of those people (80.2%) died with various comorbidities, the most common being the flu and pneumonia. 81.1% of the people who died were 65 and over and only 2.5% of deaths occurred in people under 25. Based on the 25,780,144 U.S. infections, the death rate is at approximately 1.7%.

World War II dead and wounded counts, predictably, paint a radically different picture. According to a U.S. census, 403,399 Americans died in World War II. This is the number that President Biden referred to in his inaugural address when he noted that COVID-19 had killed more people than had died in World War II. However, this number is not enough to illustrate the true costs of the war. Of the 403,399 Americans killed, 291,557 died in battle. Additionally, 670,846 soldiers were wounded. Based on the 16,112,566 soldiers serving, the death rate for the war is about 2.5%. If we include the wounded in that number, it rises to 6%.

The loss of human life in any circumstance is a tragedy. That being said, it is disingenuous to insinuate that the experiences of the people who died of COVID-19 is in any way comparable to the experience of soldiers who died on the battlefield. Additionally, the phrase “as many people have died from COVID-19 as they did in World War II” does not take into account the death rate percentages or the massive number of wounded in World War II. Taking these factors into account, COVID-19 is not comparable to World War II in terms of deaths, and the two should not be likened.

Another factor that distinguishes the pandemic from World War II is the draft. The draft is important because it radically changes the way we ought to compare the ages of those who died. In 1940, the draft age range was extended from ages 18-37. Since 11,535,000 people were drafted into service, we can infer that a majority of those who served and died in World War II were, on base, much younger than those that have died from COVID-19. This inference is supported by U.S. Naval records, which show that 28% of the navy’s forces at the end of World War II were made up of 21- to 24-year-olds. An additional 20.72% were made up of soldiers under 20.

When a young person loses their life, it feels like a special kind of tragedy, perhaps because we feel that they had so much life left to live. We should appreciate and mourn those who died due to COVID-19 while simultaneously recognizing that those people were nothing like the young soldiers who died in World War II, many of whom did not volunteer to be there. Considering the difference in the ages and experiences of those who died, COVID-19 is not comparable to World War II, and comparisons should not be seen as valid.

Lastly, I want to briefly touch on the different national impacts between the coronavirus pandemic and World War II. Some would argue that COVID-19 has taken a greater toll, because most deaths have been civilian deaths. I would argue that the draft ensured that a statistically significant number of soldiers were forcibly plucked out of their civilian lives to enter combat. The lack of voluntary enrollment is important because it follows that their deaths were just as involuntary as deaths from COVID-19.
Additionally, the shortages caused by World War II are undeniably worse than any shortages caused by the pandemic. The government was forced to ration almost everything, including, but not limited to, tires, gasoline, sugar, coffee, meats, fats, canned fish, cheese and canned milk. The rations were so severe that they led to the formation of a black market, for which state governments had to issue severe penalties. We have seen that, with COVID-19, the biggest issues are shortages caused, not by rations or lack of production, but by consumers’ impulse to buy large amounts of goods they perceive to be in short supply.
Considering the types of government regulations and the significant impacts on citizens that occurred during World War II, any comparison between it and COVID-19 should be considered fallacious.
Additionally, I claim that to compare the two is not just an erroneous use of language, but an irresponsible one. Language forms our realities; we have a responsibility to use words that reflect the truth of that reality. We have witnessed the harmful impacts of hyperbolic and false statements when they are taken seriously. To conflate World War II and the coronavirus pandemic is to plays into these harmful trends.  So scratch this comparison from your vocabulary, grab a dictionary, and find some better words to describe the times we live in. It’s an easy change with a big impact on the way we think, the way we speak, and the way we remember and honor the lost.