Gamestop: to the moon and back 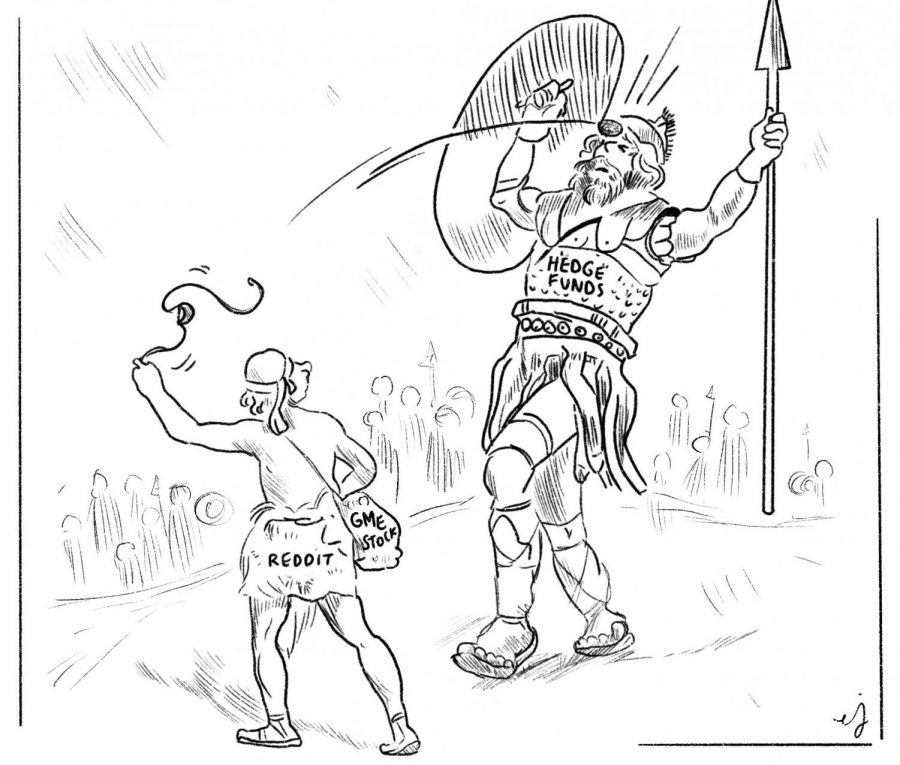 The common folk of reddit slay the giant stock shorters

In one corner, there’s the powerful and influential Wall Street: the high-net-worth investors, large global corporations, and the capital market high financiers. In the other corner, there are the masses of Main Street: the average American investors, small independent businesses, and investment institutions — what many would call the backbone of the economy. Affected by these forces are two companies: GameStop Corp. and AMC Entertainment Holdings, Inc. However, the story behind these stocks may not be as simple as what first meets the eye.

Due to the collective buy-ins of millions of common investors, the value of stocks like GameStop have increased by over 1000% in only a few days — an unprecedented rise — leading to a climb from $2 to a high of almost $350 for a single share. This climb left hedge funds having to pay back the difference after heavily shorting the stock, leading many to lose 100% of their capital. Melvin Capital required over $2 billion in bailouts from other hedge funds to stay alive. The struggle between the hedge funds and common investors comes from the pressure between modern investors driving the price high and the short investors attempting to push the price down. It is unclear, as of yet, whether the battle is over and who will remain standing at the end.

“There are a lot of dimensions to these transactions,” explained Dr. Edd Noel, Westmont College’s economics and business department chair. Currently, participation in hedge funds is restricted to those who have the means to partake in the high-risk trading that is performed there.

To enter a hedge fund, “often there is a seven-figure entry fee,” stated Noell, with all of that needing to be disposable cash.

Sophomores Noah Hareb and Josh Fitzgerald, the co-presidents of the Westmont Investment Club, also gave their insight into these events. Both were quick to point out that many unforeseen consequences may come from this affair.

“People don’t see that, because they are taking money away from rich people, there is a lot of backlash in the rest of the market,” said Hareb. A way to see this backlash would be to look at the state of the Dow Jones Industrial Average, which often shows how well or poorly the economy is really doing.

While the stock value of GameStop and other select stocks significantly went up, the market itself had “its worst week since October,” stated Fitzgerald. This weakness occurred because investors who were losing money pulled their investments from other places. These actions led to all other stocks dropping while these few flourished.

When asked about his opinion on those who continue to hold their stocks while their value drops significantly, Caleb Hareb, former president of the Investment Club, said that it is “important to know when to cut your losses” and “when not to.” As for his thoughts on selling the stocks now, he could not make an evaluation either way.

However, this event will not resolve without some possibly severe repercussions and civil actions. As believed by the interviewees, regulations will be set to prevent hedge fund damage from occurring. Those that risk so much money do not want to lose their money and will work to prevent a similar event.

“There will be a backlash for this,” said Fitzgerald. Whether this backlash comes from regulations passed by the Securities Exchange Commission, or from some other avenue, there is an agreement that something will come from this event.

“The appeal of day trading is understandable,” said Noell. However, one must always keep in mind how much risk they are willing to take on. “Some are more risk averse and others — such as the day traders — are willing to take the bigger risks, often using borrowed funds.”

Stocks, bonds and mutual funds are the most common forms of investing. However, when one joins a hedge fund, they are able to participate in a tactic known as shorting a stock, which is when one bets for a company to do worse than when the money is invested. While buying stock is purchasing a part of a company, shorts are more like borrowing a stock at a certain price and with a certain future return date. The investor is hoping that, when the date comes, the price of the stock is lower than when initially shorted. If that is the case, the investor receives the difference between the initial price and the cost at the return date.

If the value of the stock goes up, however, the losses can become extraordinary. The investor will be obligated to pay back what the price of the stock is at the moment, as well as the interest that is required. This debt may seem like an impossible situation, but that is exactly the situation that many large hedge funds, most notably Melvin Capital, find themselves in.

While this event has been unique, there is much to learn. Despite the power the masses hold, the economy always falls back into equilibrium. Every interviewee affirmed this piece of advice for any kind of trading: do your research and learn about how the markets and economics work as a whole. Only by doing that can one trade with informed knowledge and have confidence in their investments.