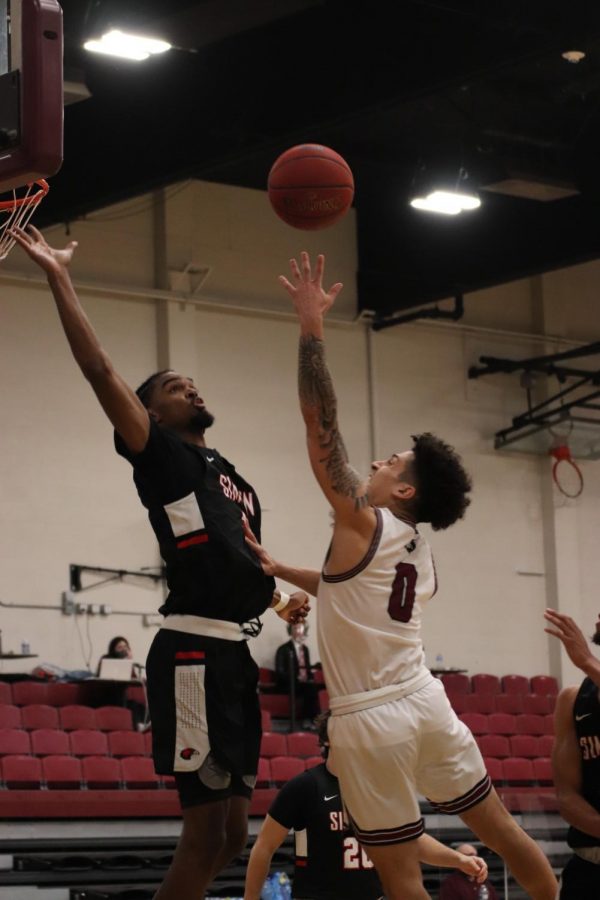 Abram Carrasco goes up for a layup.

Westmont men’s basketball is on a three-game winning streak — surpassing new thresholds in non-conference play. The Warriors played a double-header against the Simpson University Red Hawks on Friday and Saturday afternoon, dominating both games.

Although double-headers are not very common in a normal season, both teams chose to play each other twice since the RedHawks had already made the trip down from Redding, California, and all COVID-19 precautions were taken.

The Westmont men took over the first game, lighting it up from beyond the arc. They broke the school record for most three-pointers in a game by hitting an impressive 19. The previous record was 17 three-pointers.

Esselstrom scored the three that broke the record for the Warriors. When asked how he felt at that moment, he said, “Honestly, I didn’t even know I hit the record-breaker until after the game, but my teammates were hyped when they found out. It was definitely a special moment for me.”

The final score was 106-78. Carrasco was the highest scorer with 21 points, as fourth-years Ajay Singh and Hulsebosch both came in clutch with 15 points each. This blowout win gave the Warriors the confidence needed to perform similarly in the second game against Simpson the next day.

During Saturday’s game, the score remained a lot closer, as Simpson tightened their defense by closing out on shooters and extending their zone defense. In addition to this, Westmont was not as automatic from beyond the arc. However, they managed to rack up 15 three-pointers, reassuring the Simpson men that they were still a threat from beyond the arc. The final score was 90-84. This win put the Warriors’ overall record to 3-2.

When asked what went well, Esselstrom responded, “We shared the ball well in both games. We played together and made the extra pass countless times. I think that’s why we were successful against Simpson.”

Being flexible with schedule changes has been one of the consequences of the pandemic, but coaches, teams and their staff have all worked together to make this season possible. The Warriors’ next scheduled game is a home game against Vanguard University on Friday, Feb. 12, where Golden State Athletic Conference (GSAC) play will take place.