Tennis puts up a favorable fight against Concordia Eagles 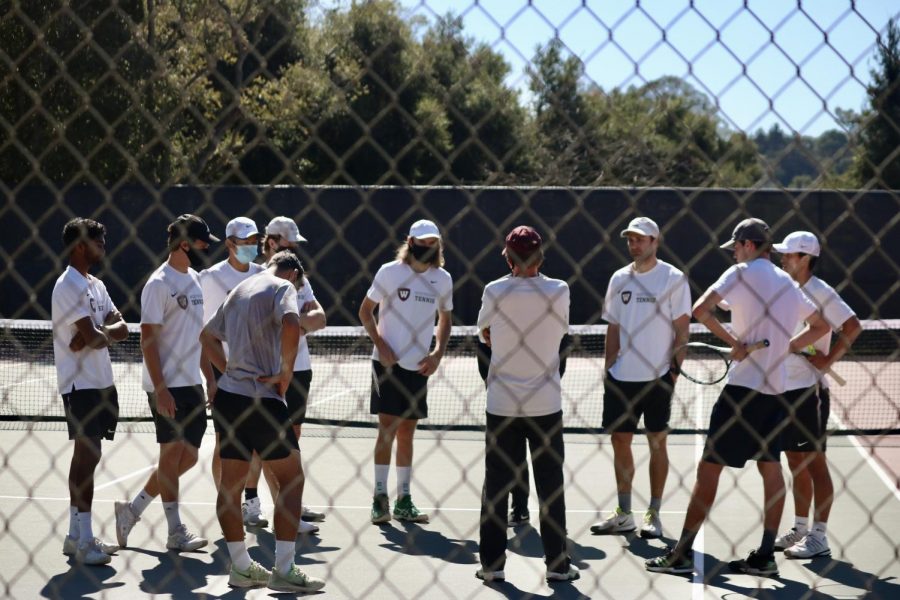 The Warriors have a quick meeting before the match.

This past week, the Westmont women’s and men’s tennis teams competed against Concordia University’s Eagles from Irvine, California, on the Abbott Tennis Courts at Westmont. Both the men’s and women’s programs played a NAIA regional tournament back in September, but have not played since then.

Now, after a couple of game cancellations due to COVID-19, the Warriors are ready to get back into the competition. Unfortunately, both the men’s and women’s programs lost to Concordia 1-6. Although it was a tough loss for the Warriors, there were many notable individual performances.

On the men’s side, fourth-year captain Matt Alleman and redshirt first-year Sebastian Vethan won 6-2 in their doubles match. The only men’s singles win came from first-year Callen Hein. He beat his Eagles opponent in a feisty tiebreaker in three sets.

First-year player Ethan Ha gave his opinions on the results of the match: “The match was tough! Playing a top D2 tennis team with a young team of mostly freshmen and sophomores was a big challenge, but we knew anyone could win if we all played well. Unfortunately, it wasn’t our day.”

The women also fought hard against the Eagles. Even with the loss, the women gave a strong performance. Their biggest shows came from the doubles matches. Cade Pierson, the fourth-year captain, and redshirt second-year Emily Peterson beat their opponents in a close match 7-6. Another great performance came from first-year Olivia Madarang and redshirt third-year Rachal Jackson. They won 6-1.

“We came into it just like any other match and fought our hardest,” Pierson said. “If anything, COVID has really taught us to cherish our time in court and our time together even more than before. We’re even more thankful for our sport and for our time with each other.”

Both programs are looking to maintain this fighting spirit in the coming weeks.

Men’s coach Mark Basham talked about his goals for his players in the upcoming matches.

“I … want all of our players to work on being more animated in actively cheering each other in our matches.” He continued, “Many of our players are low-key by nature, which makes this a little more challenging.”

As the season progresses, the men’s and women’s teams hope to show up with a winning record, even with the ever-present tribulation of COVID-19.

Both the men’s and women’s teams will compete against San Diego Christian on Saturday, Feb. 20, down in Ramona, California.