How the bill's passage could impact Christian institutions like Westmont College 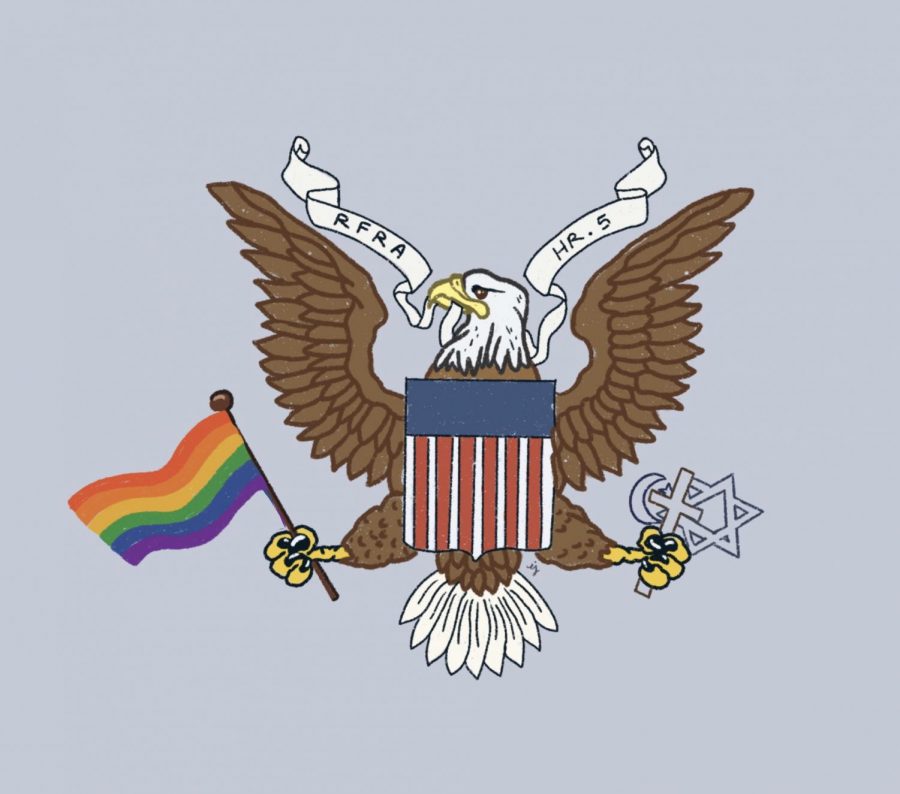 On Thursday, Feb. 26, the House of Representatives voted to pass H.R.5, better known as the Equality Act. The bill, if passed by the Senate, would amend the historic 1964 Civil Rights Act to include protections for the LGBTQ+ community and limit discrimination based on gender identity and sexual orientation. However, the act also raises questions of religious liberty that could have an impact on Christian institutions such as Westmont College.

This is the fourth time the bill has been brought to the floor in the House. It also passed the lower chamber in 2019, but died upon arrival in the Senate. This time, the bill will arrive in a deadlocked 50-50 Senate.

President Biden has made it known that getting the bill through Congress is among his top priorities. In a Feb. 19 press release, he “[urged] Congress to swiftly pass this historic legislation,” adding that “this bill represents a critical step towards ensuring that America lives up to our foundational values of equality and freedom for all.”

Despite the president’s support, the legislation remains controversial among many groups. In its effort to ban discrimination, the bill also claims priority over the Religious Freedom Restoration Act (RFRA), which was passed in 1993 with broad bipartisan support. Opponents of the bill have cited this clause as a significant threat to religious liberty.

How the bill affects religious freedoms
Religious liberty is protected under the Constitution’s First Amendment. In 1990, the Supreme Court case Employment Division of Oregon v. Smith created a new interpretation for religious freedom under the First Amendment. Dr. Jesse Covington, a professor of political science at Westmont whose research areas include constitutional law and religion, elaborated on the impacts of the case. He explained how the Smith case changed the earlier precedent that a law limiting religious freedom could only pass if there was a compelling reason for the law, and that it actively avoided limiting religious freedom as much as it could. The new precept, in Covington’s words, was that “laws that substantially burden religious exercise were fine –– as long as the burdening effect was incidental, not intentionally discriminatory toward religion.”

The Religious Freedom Restoration Act sought to increase protections for religious freedoms that were impeded upon as a result of the Smith case. The RFRA expands on the Smith case, saying that in order to pass, a law that restricts religious freedom must have a compelling interest for the state and be “the least restrictive means of furthering that compelling governmental interest.”

The Equality Act explicitly precludes RFRA protections. This means that even organizations that have religious reasons for hiring or providing services selected on the basis of sexual orientation and gender identity may not legally do so. Covington explained this, saying, “Those businesses or nonprofits that are burdened by this, i.e. it limits their ability to follow the dictates of their religion, they may not seek relief under RFRA.”

Critics of the FFA see it as limiting LGBTQ+ protection rather than enhancing it, since the FFA excludes LGBTQ+ members from the same protections given to other characteristic groups based on race, nationality, and even religion.

How the bill affects Westmont and other religious institutions
Many religious organizations have spoken out against the Equality Act. Among them is the Council of Christian Colleges and Universities (CCCU), of which Westmont is a member school. In October of 2020, Shirley Hoogstra, president of the CCCU, wrote a Christianity Today opinion piece in which she stated that the Equality Act would “pose a direct threat to Christian organizations.” Then, in a press release following the passage of the bill, the CCCU stated that “the Equality Act, as currently drafted, fails to do justice to the rich complexity of moral traditions that are central to the multi-faith and pluralistic world of 21st century America.” Both Hoogstra and the CCCU release also expressed support for the Fairness For All act.

The CCCU cited hiring practices as one significant impact of the legislation. After the bill passed the House in 2019, the Council addressed this issue of employment, saying that “religious employers … could continue to hire based on religion but could not factor beliefs or actions about sexual behavior or gender identity into hiring decisions.”

Westmont’s Vice President for Student Life, Dr. Edee Schulze, is listed as the college’s contact for its nondiscrimination policy. Schulze echoed the CCCU, saying that the enactment of the Equality Act “could have an impact on hiring at Westmont.”

“If the law passes, we here at Westmont College will definitely be consulting with our attorneys as to what it means for Westmont,” she said.

The bill could also impact Westmont’s ability to receive federal money, including financial aid. The Feb. 26 press release from the CCCU stated that “the Equality Act would restrict student choice in an unprecedented way by preventing middle- and low-income students from being able to take their federal student aid to [CCCU] institutions.” The report also states that “seven out of 10 CCCU students receive federal funding, and the withdrawal of financial aid … would have a disproportionate impact on low-income and first-generation college students, as well as students from racial and ethnic minority groups.” This is significant, given that fifty percent of CCCU students are considered financially “needy,” meaning that their families make less than $50,000 a year. A third of all CCCU students are first-generation students.

Doug Jones, Westmont’s Vice President for Finance, stated that he didn’t “know enough about the specific financial impacts of the act” and that he “would rather not speculate.”

Withdrawal of federal funding and financial aid could be financially perilous for many CCCU institutions, as it would put more pressure on their already high unrestricted institutional gift aid, which is used to support students who require financial assistance.

Sexual orientation and gender identity: a hot conversation at Westmont
Conversations of sexual orientation and gender identity are not new topics to Westmont’s campus. Students who identify as part of the LGBTQ+ population have long found themselves ostracized by the college’s community life statement, which emphasizes “lifelong heterosexual marriage.” Back in 2017, a chapel talk by conservative pastor Alistair Begg, which included calling for “sexual sin … to be banished from the Christian community,” led over a dozen students to walk out of chapel and prompted a campus-wide conversation on Westmont’s policy on sexual orientation.

One place on campus for LGBTQ+ students to air their voices is through Gradient, a group for Westmont students who identify as part of that community. Gradient president Chris Hanessian expressed his disappointment “that Westmont does not allow Gradient … to be official because it goes against Westmont’s community life statement.” Hanessian continued, “In a way, this is not giving LGBTQ+ students at Westmont a very necessary resource they need and discriminating against them based on their sexual orientation and gender identity, which the Equality Act fights against.”

Hanessian expressed support for the Equality Act, saying, “This is not just about giving people in [the LGBTQ+ community] the opportunities and positions they deserve, but also treating them with dignity and respect which everyone deserves first and foremost.” He also acknowledged the tension between the act and questions of religious liberty. “It is a really hard thing to navigate because you want to respect your religion, but you also want to respect your community and fight for their freedom.”

Recently, the administration’s efforts on campus have focused on the Christian call towards loving and supporting students in the LGBTQ+ community well. This year, the campus pastor’s office furthered this conversation by beginning Nexus, a program designed to explore questions of sexuality and gender through spiritual formation. Hanessian, who helped form the program, expressed praise for the recent strides the college has taken.

“In my experience and two years here, Westmont has been very supportive and proactive in the conversation regarding LGBTQ+ issues, which has made me really happy,” he said. “I believe we have come a long way, but there is more to do.”

The Westmont College Student Association (WCSA) is also actively seeking to make Westmont a more welcoming place for LGBTQ+ students. In the upcoming semesters, the association hopes to bring greater attention to topics of sexuality, gender, and Christianity in the form of a Conversations that Matter (CTM) event. Michael Kong, WCSA’s Diversity and Inclusion Senator, spoke to how last fall’s CTM, which focused on racial lament, inspired further conversation on sexuality. “As we sought to bring our campus through a process of lament regarding the ways the church has contributed to racism, we recognized that the church also has much to lament in terms of their treatment of those in the LGBTQ+ community.”

Kong credited Van Kampen Senator Tobi Oyebade with starting the conversation prior to this academic year. Oyebade said, “We recognize the importance of this conversation especially for our LGBTQ+ students, and we believe it would benefit those who would like to be educated or introduced to the conversation.”

While WCSA has not set a date for these conversations, Kong stated that they “plan on doing a semester-long CTM series” in the future. Kong emphasized that WCSA will be “using the remaining time this semester to spend time supporting and listening to those that identify as LGBTQ+ in our community and doing the research necessary to represent their needs and ideas well.”