Emma Wade is publicizing Westmont's underground LGBTQ+ organization even as she guards the identities of its members. 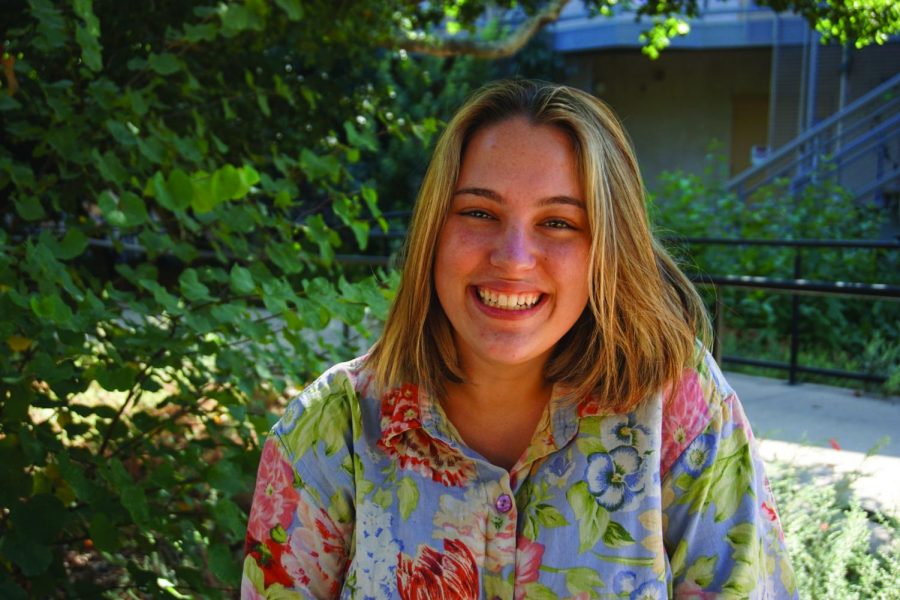 Fourth-year Emma Wade is just another Westmont student. She loves knowing her professors and the small-town feel. In her free time, she runs a food blog and swims in the ocean.

However, most Westmont students aren’t rebuilding an underground LGBTQ+ organization.

Over the last several years, the college has won a series of battles over the rights of LGBTQ+ students to meet on campus, advertise, and use school funding to build community like other groups do. Several groups composed of LGBTQ+ students and their allies vied for official status, only to be rejected.

Through it all, a more covert organization — Gradient — existed exclusively for LGBTQ+ students, and it’s now under new management. As president, Wade has used social media to revamp the group, combining its signature secrecy with a new visibility.

Westmont’s policies toward LGBTQ+ people had gone largely unchallenged in the public sphere for decades, until Donald Scherschligt, class of 2015, created an organization for LGBTQ+ students and their allies. The leaders of Spectrum, as this group was called, wanted to apply for club status, but they were “preemptively told that the club would be rejected,” Scherschligt told the Horizon. Instead, they remained an “unofficial student group.”

For a time, Scherschligt was the only openly gay student at the college, but his work made more people feel safe enough to come out. Spectrum soon needed a wing focused exclusively on LGBTQ+  students, and thus Gradient was born in 2015. That year, it claimed 20 members.

While Spectrum was engaged in advocacy and education, Gradient, from its beginning, was intended solely as a community for LGBTQ+ students. According to Wade, the organization was secretive, confined to a private Facebook group and spread only by word of mouth. “You had to know somebody to find out that it existed,” said Wade. This gave students the confidentiality they needed, but it wasn’t enough to reach new people, and membership declined.

Meanwhile, little improved for LGBTQ+ students. A 2016 change in the Community Life Statement, which removed language condemning “homosexual activity,” was only cosmetic. According to alum Caleb Rodriguez, a gay student dropped out after facing obstacles while applying to be a resident assistant, and students were rebuffed after reaching out to the pastor’s office. By the end of 2017, a chapel speaker had called for homosexuality to be “banished” from the Christian community, and, though a new organization known as Prism did manage to apply for club status, the bid had been quashed.

During this time, Gradient was nearly forgotten by all but a few. “When I came into Westmont as a freshman, I didn’t think anything like [it] existed,” said Wade. “I hated the way that felt.”

Years later, Wade stumbled upon the crumbling community and now, as its leader, she has resuscitated it in a matter of months.

Wade stresses the need for confidentiality, saying it’s a risk to be open about one’s sexuality. “To a lot of people on this campus, it’s a controversial opinion for LGBT+ people to exist,” she said. “It’s not easy.”

For this reason, Wade is engaged in a balancing act — she wants to raise awareness of the organization while also keeping its membership secret for members’ protection. Her primary tool has been Gradient’s new Instagram page, by which she follows Westmont students at random. This way, LGBTQ+ students can blend in; they’re hidden among the account’s 150 followers, and they can use direct messaging to remain anonymous to everyone but Wade.

Because of her outreach, membership has never been higher. “There’s new people every day,” said Wade. Gradient “gatherings” happen twice a month, and are heavily secured. “I never release where it is,” she said. “The door is always closed. I have to know who’s coming in and going out.”

Like her predecessors, Wade has no interest in achieving institutional endorsement for Gradient. Official or not, she just wants LGBTQ+ students to know that they can come to Gradient for resources and community.

Westmont’s administration is not ignoring the issue. For the past several years, Vice President for Student Life Edee Schulze has been meeting with student representatives about creating an official space for LGBTQ+ students and allies, and she’s still open to pursuing the options that come from those meetings. The stipulation is that any official organization must have an element of “administrative oversight.”

“I am interested in providing opportunities to support LGBTQ+ students and will help them live consistently with the commitments they make under the Community Life Statement when they enroll,” says Schulze.

Wade sees a widening gap between the college’s policies and its students. “The student body is moving so far past where policies lie,” she said.WCSA President Nolan Anderson recently reached out to her for a meeting. “I was thoroughly surprised by the student body president caring about this and validating what we’re doing,” said Wade.

Anderson says that the student government takes LGBTQ+ students seriously. “All of us agreed that this is an issue that we wanted to look into, and this is important to us,” he said. His goal is to go beyond a club to create “something similar to an intercultural organization.”

Anderson also sees an urgency to the conversation. According to him, students are unprepared to engage with society if they don’t have experience with LGBTQ+ issues. “We’re doing a huge disservice to students at Westmont by not having anything,” he said.

An official space for that kind of learning, for now, does not exist. But in the meantime, Wade is supporting LGBTQ+ students the best way she knows how — she’s trying to build a community that will last. “We’ve seen it with other movements on campus. Administration loves to just wait it out until the people graduate, or just are tired of being shut down,” said Wade. “I think it’s important to be a slow, steady voice.”

Wade is confident in Gradient’s current momentum. “I’ll graduate this year, but in a sense, the spirit of Gradient isn’t going anywhere,” she said. “People are going to care about this for years to come, and they’re not going to stop.”