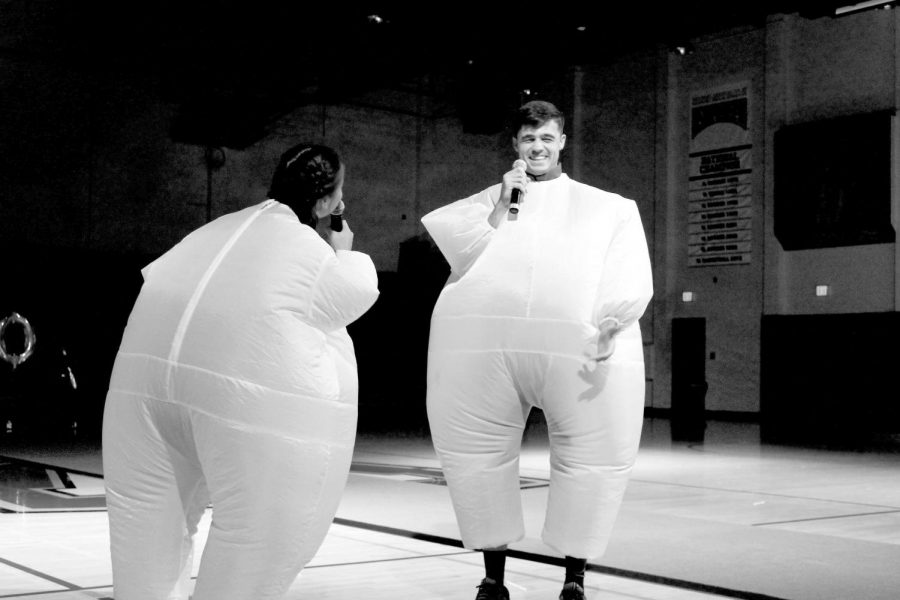 Ah-Men brought the crowd back to their childhoods with an acapella VeggieTales medley, beginning with the iconic “VeggieTales Theme Song” and interspersing other classic VeggieTales songs, such as “The Hairbrush Song” and “Oh No! What We Gonna Do?”

Following this number, the women’s basketball team was introduced. On Jan. 18, the women’s basketball team is having a match against Master’s University, and team captain Lauren Tsuneishi encouraged Westmont students to come show their support. She also requested prayers for the team’s upcoming trip to Uganda, as well as prayers for those team members that are injured.

The men’s basketball team followed suit, announcing that their first home game, which is against Corban University Oregon, is on Oct. 21. The team encouraged all students to come and support their first game of the season.

Men’s basketball then faced women’s basketball in a dribbling drill. After three rounds, the women’s team reigned victorious. They then came head to head again in a shooting relay race, where the women once again triumphed 2-1. For such a small team, this was a big victory.

Next, with roaring applause from the crowd, NSTEP walked onto the stage. They began their performance with vigor, the attention of the students and faculty locked on them with intensity, until their music stopped unexpectedly. However, with encouragement from the crowd, they made a strong recovery, leaving onlookers cheering twice as loud as when they began.