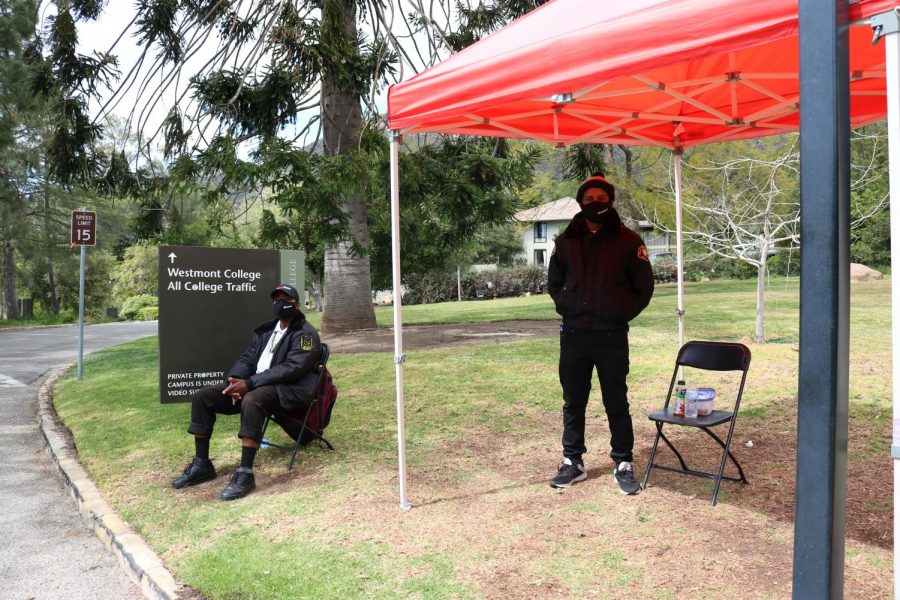 Security guards at the top entrance

Alex Mutebi drives from his home in the San Fernando Valley to Westmont College at least five days a week to guard the Westmont exit on lower campus. He starts guarding the exit at seven in the morning. With the exception of his lunch break, he stays posted there until five in the evening. Mutebi is the only guard posted at the lower campus exit, but prefers it this way. “It is pretty isolated with just me down here, but I like it like that, that’s just how I am,” Mutebi stated.

Mutebi has been stationed at the Cold Spring entrance for the last six months. “I started working here around September [or] October … before the pandemic there were no security guards posted,” said Mutebi. “My job is pretty simple … At the beginning of the day, I and the two other guards at the entrance on upper campus get a list from the physical plant, where campus safety is.” The list contains names of people who have made appointments to be on Westmont’s campus. “Anyone not on the list is not allowed to come through.” The amount of names on the list varies daily. “Sometimes we have only seven names, other times we have 10 or 12,” stated Mutebi.

For the most part, students’ interactions with the security guards are pleasant. “Sometimes, usually [with] the boys, we will get someone who is rowdy or rude with us, but it comes with the job, and for the majority of the time there are no issues,” said Mutebi.

Mutebi and the other guards were hired through Good Guard. When Westmont hired the company, Good Guard posted on its platform that the company needed guards at Westmont.

According to Mutebi, Good Guard has not provided security for any schools before. “Here, my job is mostly observing; whereas before, I had jobs guarding a homeless institute, a mental institute, and a CVS where people would steal, or be abusive or there was the threat of physical assault. Here, there is a very small threat and the environment is very different and more calm compared to past jobs; I don’t have to hustle.” Although Westmont is not directly associated with the security guards, the institution does provide the guards with the resources required for the job. “We do have support from campus. If I or the other security guards have a question about something, we will ask usually campus safety [or] the physical plant, and they always provide support,” Mutebi explained.

Westmont has committed to a one-year trial with Good Guard, but nothing has been decided for what will happen after the trial ends. Mutebi hopes his good job performance will lead to a renewed contract. “Our performance, along with how vital security is to the school, is what’s being observed right now, and I am trying to do my best performance until hopefully the contract is renewed. Westmont has realized that even without [COVID-19], security at the entrance and exit is an important issue that needs to be addressed.”

While the guards have a role to play in slowing disease spread, it’s yet to be seen how this role will evolve as more students and faculty receive their vaccinations. Only time will tell if the community will still be greeted by Alex Mutebi and the other security guards come the Fall.