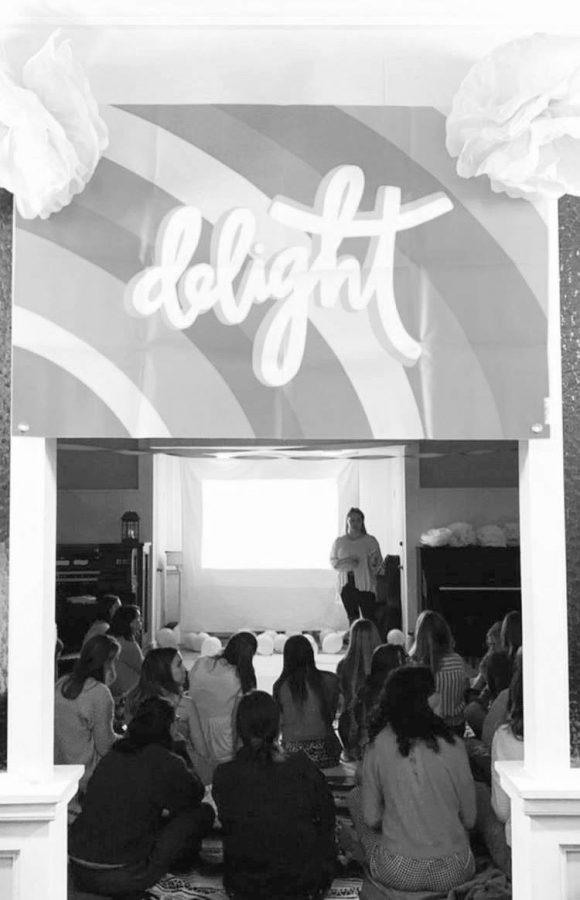 Women gather in the Prayer Chapel Sunday evening for a Delight Ministries meeting.

Every Sunday night, the Prayer Chapel is transformed into a space where Delight Ministries, under leader Kendall Breeden, meets as the first all-women club on campus. Breeden, a current sophomore, told The Horizon about her heart for Delight and the excitement surrounding this newly initiated club.

When asked where her desire for Delight originated, Breeden shared that she “felt there was a need for a community that would join a diverse group of women together under the commonality of a love for Jesus.” This desire was made a reality when one of the founders of Delight reached out to Breeden about starting a chapter at Westmont. As she felt the Lord calling her to look further into it, she revealed, “I did not feel particularly equipped to lead it, but I offered it up to God, thinking that if this is on my heart and is of Him, maybe something could come of it.”

Something indeed has come of it. Through the involvement and backing of the pastor’s office, Breeden was able to get the club approved and now the Westmont chapter of Delight meets on Sunday nights from 7-9 p.m. at the center of campus in the Prayer Chapel. Ever since getting the support to start Delight, she admitted that “the process has been so smooth and it has been amazing to see the Lord’s hand on it and to be able to watch interest grow for the program.” She also highlighted the group of women who have rallied behind her, saying, “It has been humbling to watch the Lord mold a team of incredible, talented women to work alongside.”

The program itself was started by two Christian woman, named Mackenzie Baker and Mackenzie Wilson, and it has now grown to become an international ministry with over 130 chapters. Their vision for Delight, according to Breeden, is to “focus on the commonality of Jesus’ love among women and daughters of God.” The program is based upon a book that looks into the stories of women across the nation, where God has worked in a specific topic. Some of Breeden’s excitement lies in the fact that “these stories are oriented around problems that are commonly struggled with by college-age women, whether that is body insecurity, comparison, or knowing how to fit God into our everyday lives and stories.” The program seeks to gather women together under these commonalities and allow them to process together “in a vulnerable and open space, where they feel welcome,” according to Breedan.

There are many facets of the the Delight program which Breeden voiced her particular excitement for, such as Delight Dates, where the women will get paired randomly every two weeks to hang out together. Breeden hopes that “they will cultivate a new culture among women where they feel known and cared for, even by those they may not know as well. It will make a small group of women feel even smaller.” Breeden also spoke highly of the creativity of the program, especially in the conversation starters within the Delight book, which allow for women to “dig deeper into the stories and connect them back to scripture and their own lives.”

Breeden has several hopes for the outcome of the Delight program at Westmont, including “long term relationships that create a larger community of women that reaches past their college years”, and she said she “would love to see Delight thrive and continue to become a part of the culture at Westmont.”