Black Student Union continues to break the silence about race 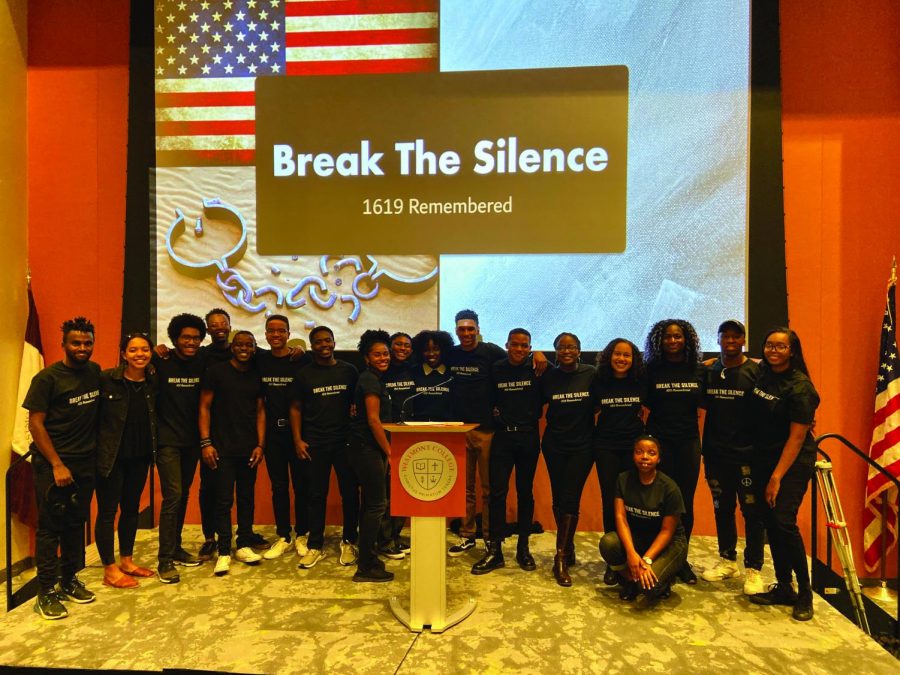 BSU members shared their personal stories of how their lives have been affected by slavery.

This year marks the 400-year anniversary of the first African slaves arriving in North America. The Black Student Union (BSU) lamented and remembered that occurrence in 1619 by partaking in a new event on campus called Break the Silence. Last Wednesday, black students and Professor Ogechi Nwaokelemeh didn’t speak until the event that evening, where over 200 students, professors, and staff members listened to their personal stories of how their lives have been affected by slavery.

Break the Silence included six student speakers led by Tori Davis and Chisondi Warioba, co-leaders for BSU, and singing performances by Jared Clarke and Sibongakonkhe Msibi. Jonathan Lee, student body vice president, was one of the first student speakers. Jonathan Lee is half-Asian, half-black, and because of that, people assume his last name comes from his Asian heritage. Lee shared that in fact, it does not. Lee said, “My name is a slave name, and one that I share with a famous Confederate general.” By taking away Lee’s ancestors’ last name, white slave owners took away black slaves’ identity and their ancestral history.

In Lee’s opinion, things aren’t changing for the black community here at Westmont College. Even though the college is making baby steps towards diversity, Westmont is still far away from being able to call the campus diverse. Lee said at the event, “I’m not here to be a marketing campaign.” What Lee was referring to was Westmont putting him on the front cover and inside several magazines and pamphlets. By advertising Lee through the pictures, it made Westmont appear more diverse than it actually is to this day. Black students make up approximately 2% of the school’s population, even with a more “diverse” first-year class.

On Wednesday night, junior Luvuyo Magwaza spoke to the audience, saying, “It’s also important for white people to speak up on these issues. The 2% can only push things so far.”

Tori Davis, co-leader of BSU, spoke on what white students can do to raise awareness on campus and continue the conversation. Davis said, “Start by just acquiring knowledge and learning. Take the time to listen to podcasts and reading books. Take the time to open your mind to different perspectives and listening to different viewpoints. Take the initiative to learn and use that baseline knowledge to not stop learning and continue to listen and read more, because there is always more to learn. And secondly, being able to talk to other white people and bring to light the significant differences in life with when you are white versus a person of color. And to just truly recognize that those disparities do exist.”

Looking back, Davis believes Wednesday night went well due to BSU approaching the conversation through the platform of education. Davis said, “Also coming at a posture of education seemed to be really receptive to people, especially to those who are just entering these conversations.”

Caitlyn Wells, business manager for Intercultural Programs, reflected on Wednesday night, saying, “I thought the program was incredibly moving and important to hear — especially at a predominantly white institution, such at Westmont. Black Student Union powerfully addressed the ways in which slavery has evolved today both personally and systematically, while explicitly naming the deafening societal silence surrounding racism in America.”

Towards the end of Wednesday evening Professor Ogechi Nwaokelemeh said a few closing words. She addressed that throughout her silence that day, she had received several emails by Westmont students mocking Break the Silence and the Black students. During the event, Lee mentioned that someone was mocking a professor for participating in the silence, and Professor Nwaokelemeh was the only professor who participated last Wednesday.

Professor Nwaokelemeh said, “I had anticipated that there may be some reservations and/or opposition to the focus on the lingering impact of slavery so the emails were not a complete surprise. Both the emails and the mentioning of my class confirmed within me the need to continue to heighten awareness of the contemporary societal and personal repercussions stemming from our American slave history.  It made me realize that the day’s events had indeed achieved its purpose in helping to instigate dialogue and discussion surrounding this important issue. And as I mentioned during my closing remarks during the ‘Break the Silence’ event, ‘seeds’ of historical insight and racism-oriented facts were planted.  It is my prayer that respectful, open-minded discussions and the work of the Holy Spirit can help to ‘water’ those seeds in order to produce a ‘harvest’ of greater understanding and collective support going forward.”

Lee followed up after the event, saying, “When I heard that people were mocking the event, I honestly wasn’t surprised. I think it’s really hard for people with privilege to understand how it feels as a person of color to navigate life in a predominantly white space where our bodies, our stories, and our culture constantly place us as ‘different.’ People will mock our choice to be silent, but it’s exactly what they want. They don’t want us to speak out against their racism and intolerance, their refusal to acknowledge the systems that continually try to push us down. I am sad that this beautiful and somber day was taken by some to be a joke, but that does not take away the strength and dignity of all the members of the black community who participated.”